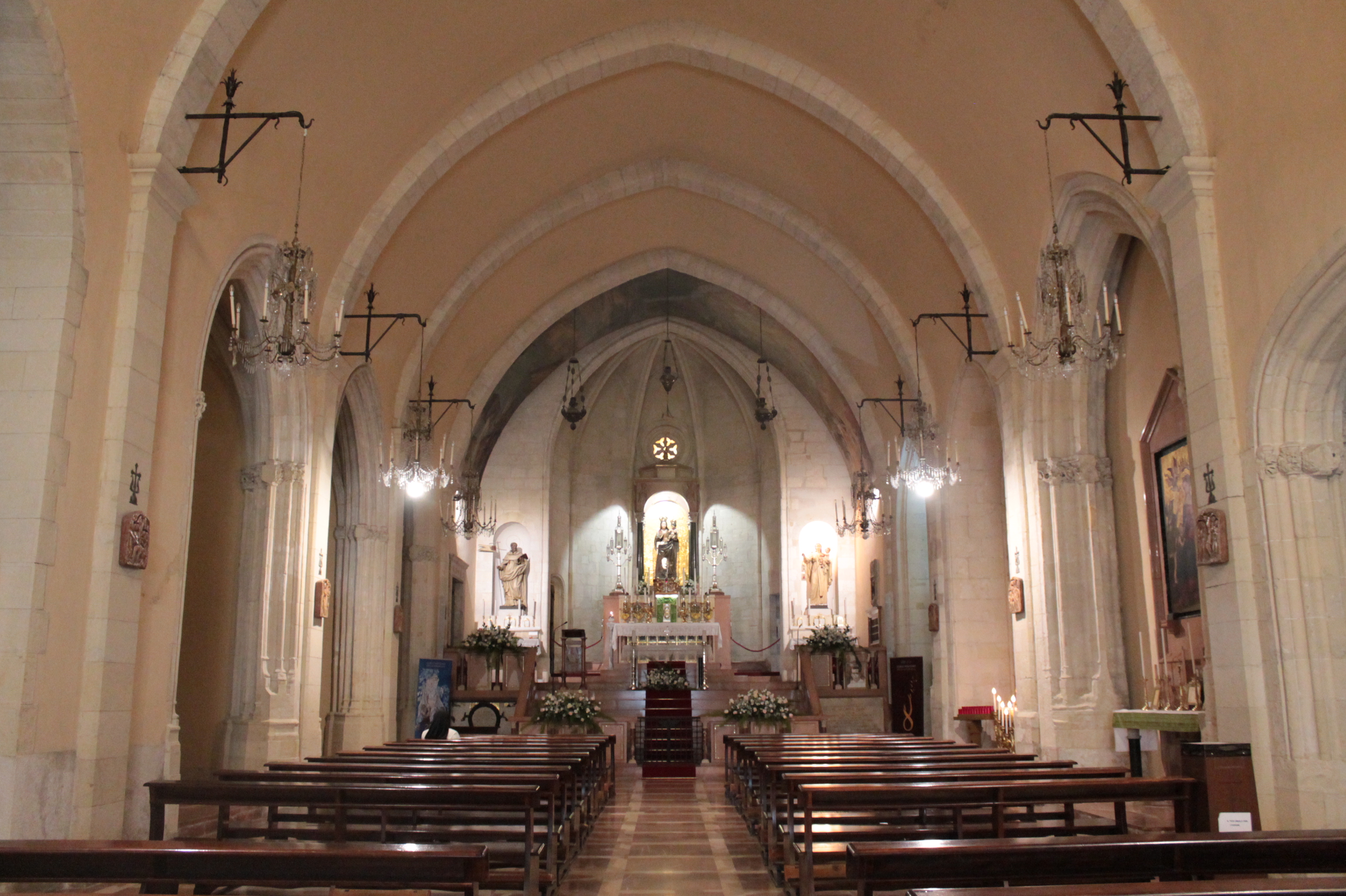 Discovering heritage in Cagliari during make heritage fun event led me to visit the Sanctuary of Bonaria, a little chapel now and ancient church in the core of the city, one of the first examples of Spanish architecture in Sardinia. 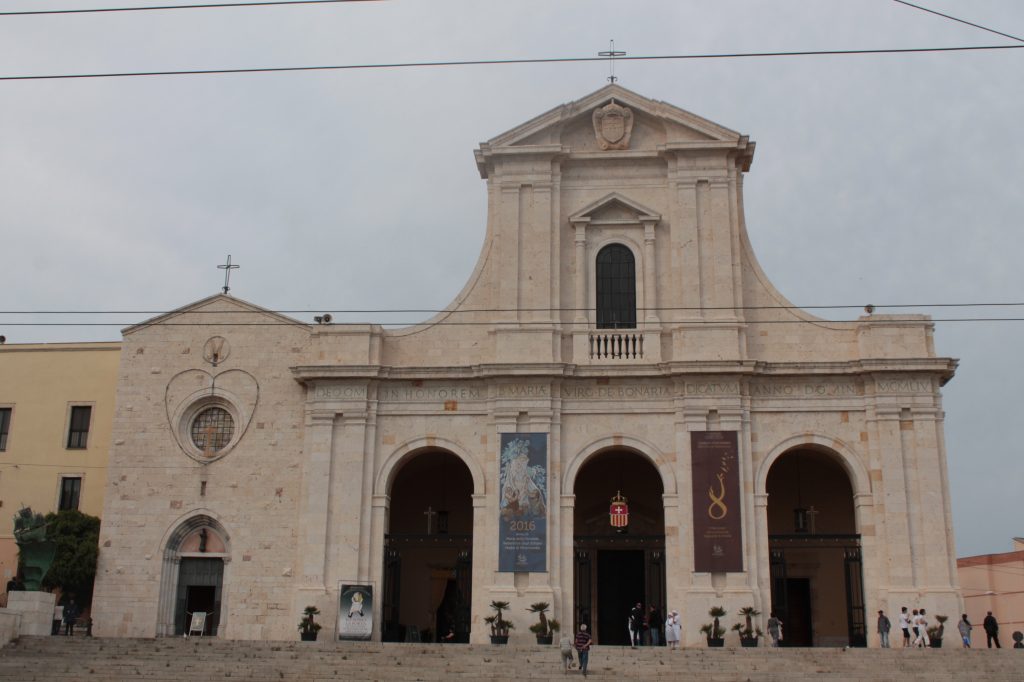 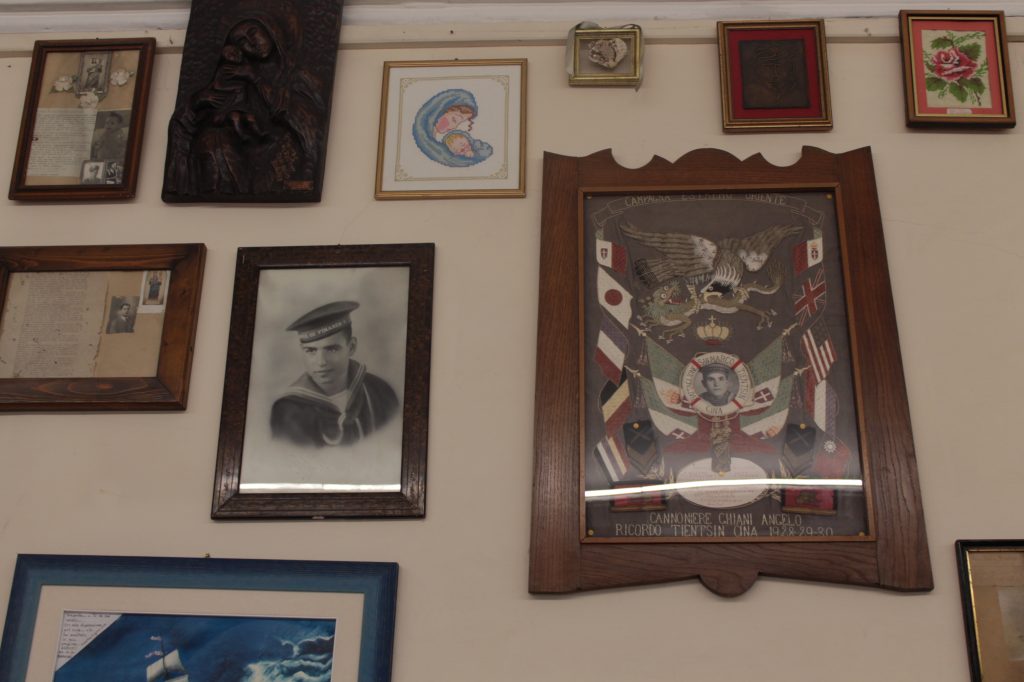 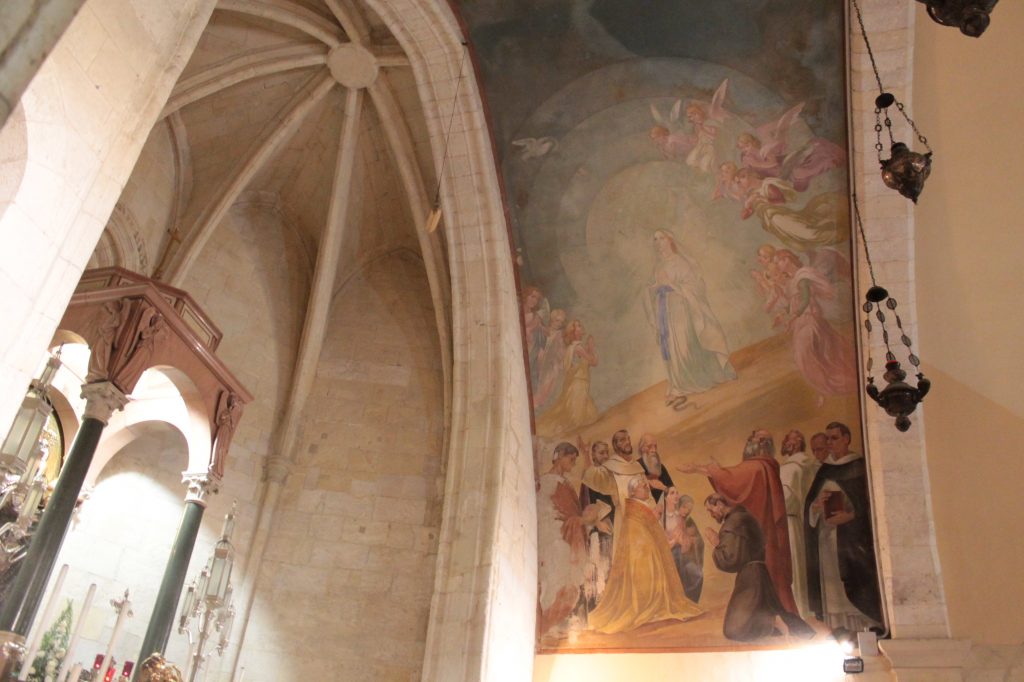 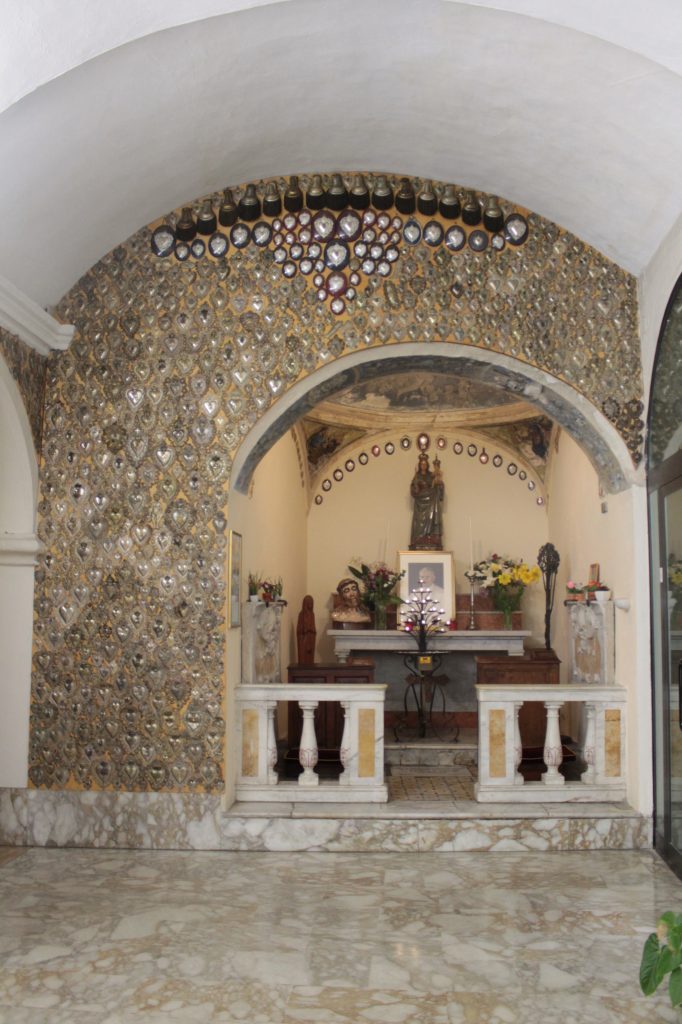 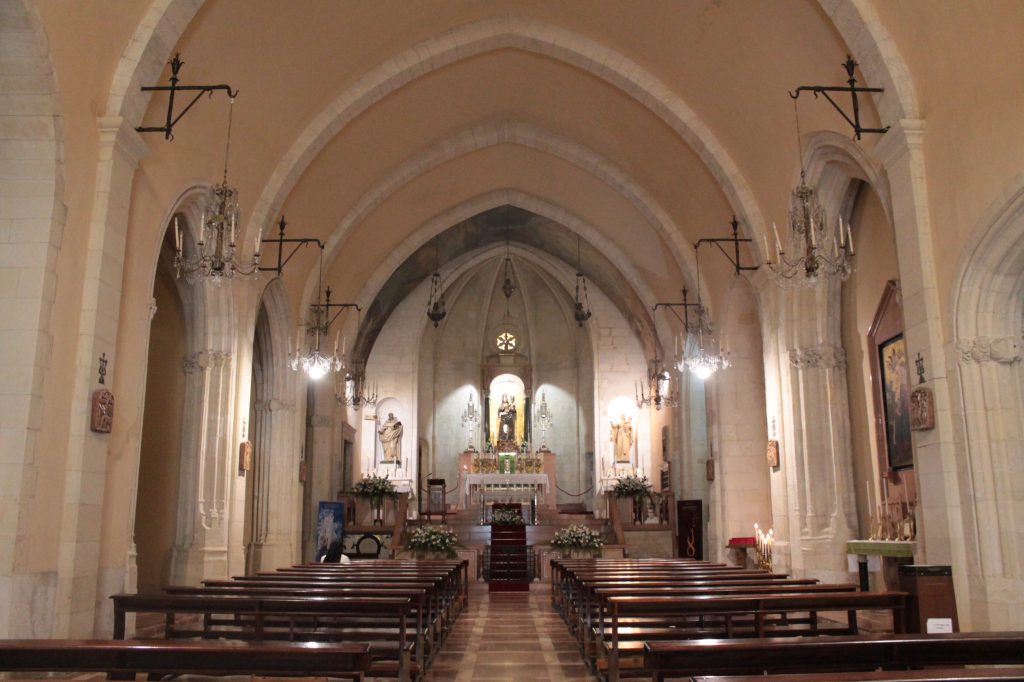 Cagliari is an ancient city in the south of Italy built on hills in front of the sea and it’s always been a strategic point in the Mediterranean for its particular location. Cause of this in the XIV cen. the city was subjected to a spanish invasion. The king of Aragon, aided by Pope Boniface VII, invaded the island , passing from the swampy west zone called Iglesias and decided to establish his army on one hill overlooking the sea calling it Castell de Bonayre ( Castel of Bonaria), due to the fresh air blowing from sea. In fact the origin of the name Bonaria could be translated as Good Air.

During the years the population increased with merchants and carpenters coming from Spain , a great fortification was built to protect the village and also the sanctuary date from 1323-1326. King Alfonso the Benign defeated the Castrum of Cagliari , still under Pisans control , and all the population, more than 8000 people, moved to the new fortress. The hill of Bonaria was abandoned and in 1335 the church was donated to the religious order of brothers of Mercede and consecrated to Divine Trinity and , after, to Saint Mary.

With this brief historic moment, all history of Sardinia was marked by spanish influence in architecture with gothic-catalan style.

The Sanctuary of Bonaria is the most ancient and better preserved testimony of that period.

The interior of the chapel and the rest of fortress tower, now belfry, are all that remains of spanish domination. Along the centuries the church and its around was subjected to several works and the result it’s a different implantation of the place. Today we can access to a monumental staircase, from the base of the hill, with gardens on both side and we enter in a beautiful square in front of a Basilica of Bonaria. On the left side we find the little Sanctuary, with its simple facade and ,on its left, we have a squared body of the old monastery. On the back side of basilica there is a old cemetery .Others buildings were added distorting the nature of the place.

Originally the sanctuary had a simple form. In the interior we can find a singular nave with 7 chapels three on left side and four on right side and a particular apsis. This is made like spanish architects used to do : a polygonal apsis covered by a vault with six ribs that go until the floor from the centre and here ,where the ribs radiate from, there is a sculptured gem. The nave is divided in 6 bays by pointed arches . The actual barrel vault is dated from XVII century.

The presbytery was raised in XIX century during restoration works .All the floor it’s been smoothed sacrificing the ancient tombs underground. Now we encounter a little staircase more than 1 metre high. In the same period it’s been substituted the old gate with a Gothic door coming from the destroyed church of Saint Francis in the quarter of Stampace. Also the facade was rebuilt with white stone, calcareous stone and was installed a rose window. Over the door there is a little lunette guarding a copy of the big statue inside.

In XVIII century started the works to build the basilica so three of the original chapels of the sanctuary were sacrificed . The two churches are connected with a interior door.

All visitors can find the sanctuary simple, elegant and very attractive , despite the average interventions the ancient church suffered . The magnificent of the apsis is a particular and perfect prospective resolution . The vault of presbytery it’s been painted in XX century by Gina Baldracchini and the paintings tell the history of the Madonna of Bonaria.

On the left side of presbytery we can access a little door and pass into the sacristy. Here we can enter in a little passage ,under the old tower and we reach, through a few of stairs, the throne of the statue of the Madonna.

The main soul of the church is the statue. Around her exist many traditional stories , like legends, that make a history more interesting and exited all the devoted people.

A legend tells that in 1370 during a storm a Spanish ship was going to sink so the sailors ,to be safe, threw in the water a lot of wood boxes. One of these reached the beach and the brothers of the convent discovered the statue of the Madonna. After this all the sky became blue to demonstrate the sanctity of the event. In that point was raised a column with a little cross, to indicate the specific place where the statue touched the land.

That statue now represent the Madonna of Bonaria, the protector of Sardinia and of all the sailors or persons whom need to sail. The old box is also preserved in the sacristy, missing some piece because some of them were presented to devoted sailors before leaving.

The statue now stays in the apsis , under a little niche. Behind there is a mosaic with golden tiles . The wooden statue is very well sculptured with many details like the face of the Madonna, so sweet. It’s has a hight of 1,56 metres. The right hand is grabbing a little ship as a candle holder and the left one is embracing a Child Jesus grabbing a globe. In front of the statue , in the presbytery is hung a ivory ship, donated by a stranger peregrine whom, according to another legend, was going to Holy Land and passed through Church of Bonaria. The ship is oriented following the orientation of the wind blowing from the Gulf of Angels.

Very characteristic in the sanctuary is the average quantity of ex-voto. These are like presents from followers whom received a benediction to the Madonna. In the sacristy there is a whole wall totally covered with silver hearts. Under the tower we can encounter a lot of crutches and prosthesis. In the Interior Museum there are also consecrated objects from Noble Families ,Popes, artists . Many of these have a nautic motif.

In the sacresty ,dating from 1666 ,are preserved a lot of paintings by Domenico Conti and models of typical ships of past centuries.

During last years didn’t occurs many changes just the ancient church became a little chapel,compared to nearby basilica. Pope Francis came in Sardinia to visit the basilica . With him came also the governor of the city of Buenos Aires ( Argentina) where pope comes from. Both paid homage to the Madonna. The origin of the name ‘ Buenos Aires ‘ derive from the translation of Bonaria. Some of the brothers of the monastery decided to leave to go in the New World and there founded a new city in honour of their own homeland.

This and others kind of legends can be known about many objects, statues and ex-voto inside the sanctuary because its history is built day by day by devoted people and the legends around them.