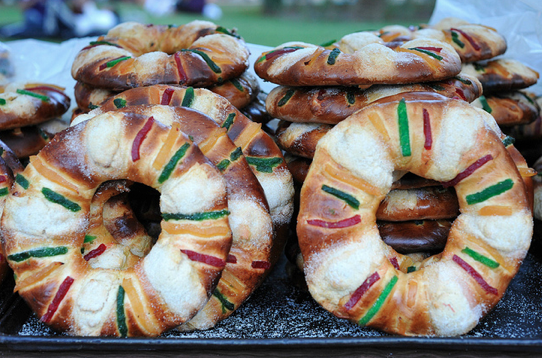 The Rosca De Reyes is not only meant to look like a crown. It is bread that has a deep symbolism behind it in the religious sense.

Mexico is truly “A World of its own”, living up to its motto “Crescit Eundo;”which means “Grows as it goes.” This beautiful nation is much more than just its exotic culture and clear blue seas. The unique gastronomy of Mexican cuisine is a favourite worldwide. Salsa, tacos, guacamole and burritos only just scratch the surface of the culinary fare in Mexico. There is so much to discover in Mexico when you take a stroll downtown. You are bound to notice the uniqueness and importance of humble home-style cooking that is earthy and completely natural, rich in flavour, colourful and peppered with spices, which adds a satiating kick.

Mexican gastronomy can be regionally classified. The Northern region known for its meat and cheeses, the South-Pacific coast its chilli pepper varieties, chicken and cheese, the North-pacific coast large quantities of fruits and vegetables, The Southern region for its spices and corn, the Bajio-region contains much more rice, sausages and pork dishes and the Gulf-region Vanilla and Corn cuisines (Facts about Mexico). Rosca De Reyes “The Mexican Three Kings Bread is a special celebratory desert enjoyed by everyone during “El Dĩa de Reyes” (The Three Kings day) celebration.

The Three Kings Day (“El Dĩa de Reyes) or Feast of Epiphany, is a loved family tradition celebrated throughout Mexico, to mark the culmination of the Twelve days of Christmas that commemorate the Biblical Three Wise men who travelled afar bearing precious gifts of Gold, Myrrh and Frankincense for baby Jesus.  This traditional Celebration, which is held on the 6th of January each year, is an occasion for gift sharing, indulging in grand feast of corn tamales accompanied by hot chocolate and sharing of Rosca De Reyes (Rosca meaning Wreath and Reyes meaning Kings) Three Kings Bread/cake by friends and families.

In Mexico, children receive the majority of their gifts on this day, brought by Men dressed as“ the Three Wise men” usually called Los Reyes Magos or Three Kings, namely Melchor, Gasper and Baltazar, because Santa Claus is seen as a foreign tradition.

The bread offers much in terms of Symbolism. It has an oval shape which signifies the Crown of King Herod whom they were hiding from. The inside holds a doll that represents baby Jesus hiding. The Rosca de Reyes is decorated with dried and candied fruits, symbolizing the many jewels of a crown. The person who gets the slice with the doll is symbolically Jesus’ godparent and must sponsor the party when he is taken to the temple to be blessed on Dia de la Candelaria (Candlemas day), celebrated on the 2nd of February.

The life of a Mexican revolves around a cycle of traditional festivity celebrations through the seasons, a continuous series of events which brings family and friends together.

Mahatma Gandhi: The Textbook of Humanity