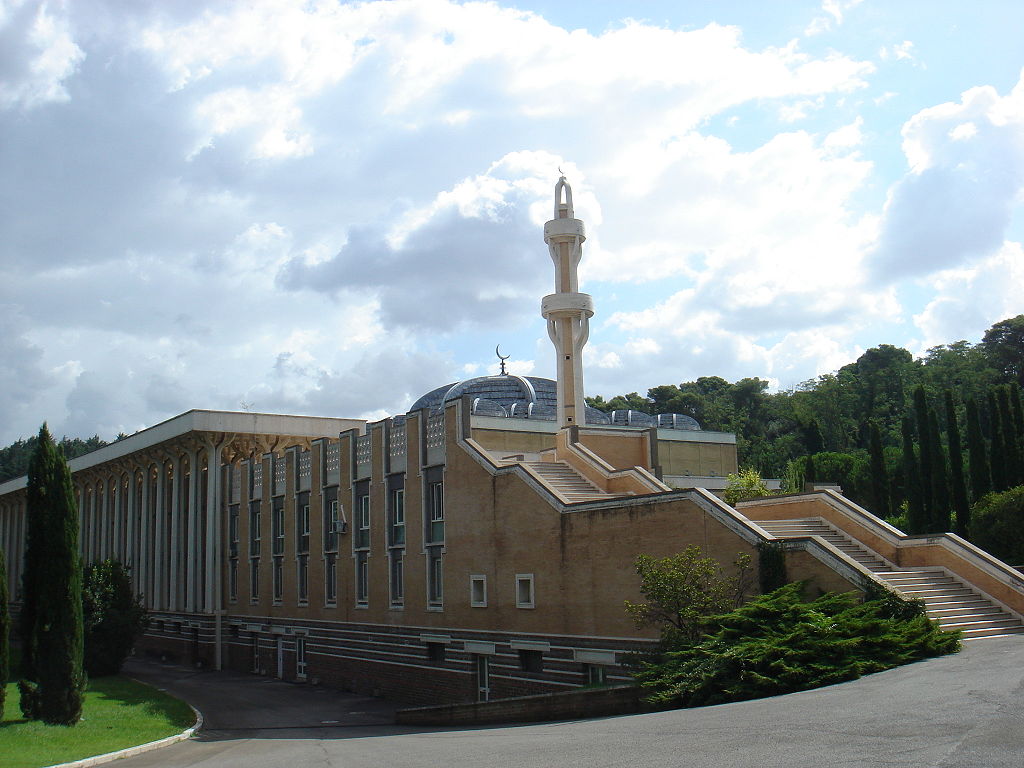 The Italian capital is known as one of the greatest open air museums in the world. The continuous conservation of archaeological sites, dramatic monuments and churches from all ages has shaped the appearance of Rome’s historic center.

Among the overwhelming richness of monuments and sites found in the city, churches are one of the most recurrent elements. There are about 900 churches in Rome – the highest in the world.

With the presence of the Vatican State, surrounded in the middle of the city, it is understandable how Rome is considered one of the most important religious destinations in the world. This is the reason why, in this context of strong Christian architectural identity, the presence of the largest mosque in Rome, and in Europe represents an unexpected discovery.

Rome’s Great Mosque is part of the architectural heritage of the city since 1994, and still remains largely unknown.

The construction of Rome’s Great Mosque started in 1984, ten years after the regulation that assigned part of the municipal land to the project. The mosque occupies a surface of about 30,000 square meters, and can accommodate up to 40,000 worshipers during religious events.

The desire to build a mosque in Rome was expressed by King Faysal of Saudi Arabia, who is also its main financial contributor. The project was assigned to Paolo Portoghesi, a renowned architect, theorist and professor. The location, north of the city and about 6,5 km from the historic center, was chosen for two main reasons. Logistics, to minimize the impacts derived from noise and to make the site easily accessible from a large number of people and Vision, to preserve the city’s visual integrity.

The architecture of the mosque is extremely different from all the monuments, archaeological areas and churches giving Rome its architectural character. Nevertheless, the talent of Paolo Portoghesi managed to integrate the mosque’s traditional features with characteristics from the local architecture, making the mosque a cultural meeting point.

Built heritage, as we know, accounts a symbolic meaning and function. However, when it comes to religious buildings, coexistence can be tricky, as in the case of Rome’s Great Mosque. The construction of the mosque has seen several protests, both ideological (“it does not represent the Italian history and traditions”) and visual (the dramatic difference with Rome’s built heritage).

While the ideological adversities require a longer time to be faced, Portoghesi decided to give to the mosque a modern design, with large spaces making the light one of the most important elements; the mosque was built using travertine marble and cotto rosato, two materials used in most of the Roman monuments. The peripheral location, modern design, local materials and height of the minaret made the construction of the mosque possible, even after protests.

In a recent interview for La Stampa, Portoghesi complains about the decision of locating the mosque in such a peripheral area. “It should have been visible from the Tiber River, like the Basilica of St. Peter and the Synagogue, to create a sort continuity of three important religions along the river… but they have chosen a space to hide the mosque, rather than valorize it,” he said

The mosque, in addition to working as worship place for the large community of Muslims in the capital, also serves as the head office of the Italian Islamic Cultural Centre. The cultural center is the only Islamic association legally recognized by the Italian legislation, and has a statute and administrative council. One of the aims of the association is to raise awareness on the Islamic culture and religion, in order to break stereotype and promote peace through knowledge. To do so, one of the most important activities is the opening of the Mosque to the public. As the librarian of the mosque, Gabriele Tecchiato said, “we recognize the mosque both as a worship place and as a monument, and we want to make it accessible for everyone”.

Guided tours in the mosque are held twice a week, free of charge, by volunteers.  Visitors are often surprised by the (unexpected) beauty and serenity of the place.

“Currently, it is undeniable, the actual circumstances (religious extremism and terrorism, edit.) have caused a decrease in the number of visits; we deeply regret it, because we believe that this would be the most important moment to go and visit a mosque and get to know a reality that is extremely different than the one portrayed by the media,” said Tecchiato.

The Mosque and the Islamic Centre organize several awareness-rising initiatives, like the week of the Islamic culture, held every year. Exhibitions, performances and courses are organized with the end goal to create a bridge between different cultures and religions.

Rome’s Great Mosque, therefore, represents a perfect symbol of integrity, both in its architecture and in its function. A visit to this stunning built heritage is a unique experience and an important message in hard times for cultural diversity.

The Street Food Heritage Of Bengaluru