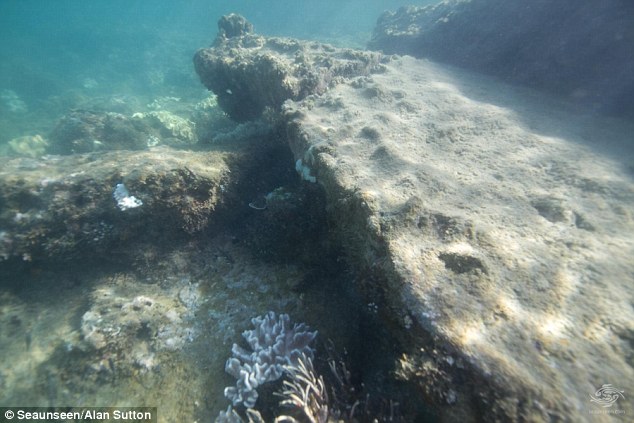 For many years, there has been a mystery surrounding the location of the trading city of of Rhapta which seems to have vanished from the face of the earth. Many scholars, divers and archaeologists have been trying to locate the city described by Claudius Ptolemy as ‘the last marketplace of Azania’, in vain. Dating to roughly 50 A.D., Rhapta, was originally documented by Ptolemy as Africa’s first metropolis- a trading hub for tortoise shells and metal weapons in the his book the ‘Periplus of the Erythraean Sea’.

Rhapta was one of the wealthiest cities of its time, yet little has been recorded about it for over 1,600 years! In his work “Geography”, Ptolemy recites an account of Diogenes, a seaman on the India trade who visited Rhapta and was blown off course.

Later on, in the early 1890s, a German explorer also visited the island and mapped it. The map mentions the Portuguese fort of Rhapta as having been washed away by the sea.

In the year 2013, diver Alan Sutton spotted the ruins of this ancient city, by chance, from a helicopter. The closest island to the legendary Rhapta Island, Mafia, is a sand island. There are no rocks in the area and neither are there barrier reefs. It is therefore geographically correct to conclude that this wall-like formation belongs to a different island.

Following proper excavation, what was found was far larger than expected. A series of what appears to be wide foundations enclosing a large area. Along the entire perimeter created by these foundations, many thousands of square and oblong blocks lie on either side. Some of the blocks have since fallen off the foundation but others are still leaning against it.

The largest intact block seen was approximately 5 meters by 5 meters and 40 cm thick, as recorded by Allan Sutton. The blocks appear to be made out of a type of light brown matrix that resembles sandstone. There are no sandstone deposits known in the area and how these blocks ended up in this location remains an enigma.

Along the walls are some large porites corals which grow at a rate of approximately 4.5 mm per year. The largest of these corals seen was around 2.5 meters in width indicating a rough age of the coral in excess of 550 years. The age of the porites may be used to estimate the date this ‘legendary city’ sank.

Little work has been done on this underwater site and it is bound to keep archaeologists and scientists busy for many years to come.  Without a large amount of research it is impossible to say with certainty that the site is indeed the ‘lost metropolis of Azania’, however Alan Sutton suggests that it could have been a very old harbor city. Much research and excavation still needs to be done in order to fit this puzzle to early East African Civilization.