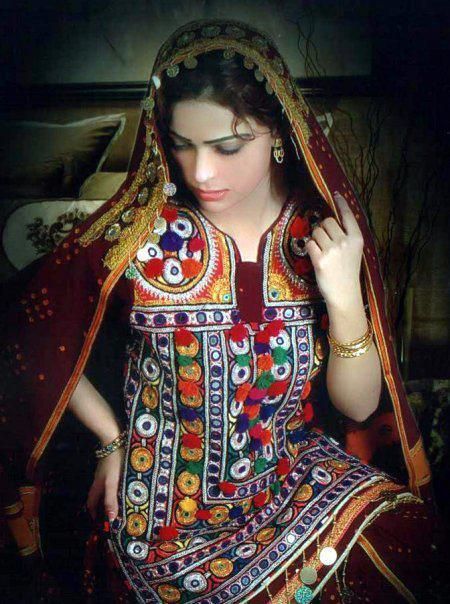 Pakistan is home to many amazing handiworks but the Balochi embroidery deserves a special mention. According to different sources the Balochi embroidery is regarded as an ancient handicraft that passes from one generation of women to the succeeding. The craft is native to the barren lands of Balochistan celebrating nomadic lifestyle.

Shezad Baloch, a journalist at the Express Tribune quotes Faheem Baloch, a lecturer at the University of Balochistan in a 2012 article, ‘most of the motifs and designs of Balochi embroidery have been inspired by nature, some of the patterns take inspiration from the pottery of the Mehrgarh civilization, one of the oldest civilizations of the world, which once existed in the Bolan district of Balochistan’.

This increases the importance that the craft holds as it points towards an intact cultural practice.

The craft basically belongs to women as artisans and also as a wearer. It is said that Balochi women practice the embroidery every day to keep their skills polished. Although machine embroidery is also now available but handcrafted and customized shirts (kameez) hold more value.

The embroidery covers the front of the kameez, along-with the cuffs of the sleeves and shalwar (open trousers). Bright-colored threads, tiny mirrors, and stitching are part and parcel of the final product.

Different regions of Balochistan have their own distinct designs indicating relevance to a particular tribe. For instance, the Kalat district is known for its kalati embroidery, whereas, periwal, jalar, kapuk and naal are a product of Mekran division. Different types of stitches are used in the embroidery which are geometrically organized related to a location or may even relate to a woman’s current situation.

‘A mother who has lost her only son might refrain from using certain stitches in her embroidery, while a widow will be identified by the use of simple threads.’ (Humsheri.org, in a 2015 article). Common motifs used are arrows, chicken feet, diamonds and flowers.

Hand embroidery is not only famous nationally, but is revered in the Gulf countries. The most extravagant dresses are made for the brides; which can sell for as much as Rs 70,000 and could take several months to a year to complete. Simple everyday wear is quiet affordable to the extent that many believe the women responsible for producing such work of art are not being given their due share for the hard work.

Memory of Time: Craftsmanship in Conservation of Fossils