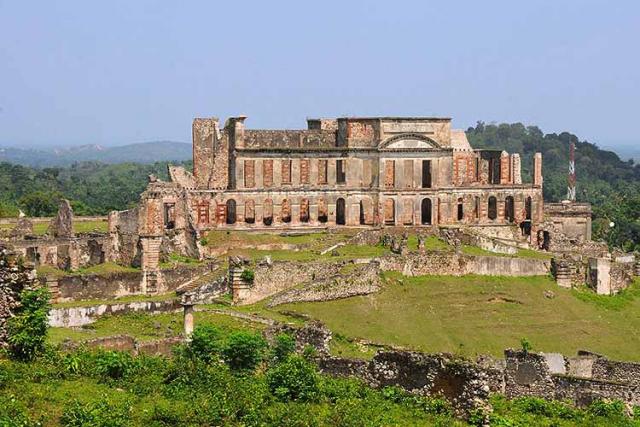 5 years after a devastating earthquake, Haiti’s restoration continues. A brief look at the efforts to restore lost heritage throws an encouraging picture.

Haiti is an extremely mountainous country, the very name means that in the language of the Taino Indians who settled there before its colonization. The culture of Haiti is intriguing because it is imbued with French flavour, which is derived from its early colonization by the Frenchmen. Kreyole is the native language of Haiti, but a lot of natives speak French too. 95% of the population identifies as African.

Haitian culture is extremely raw and primal in its expression. Its art is simple and bold, and reflects the hardy nature of its tribes and native population. Its architecture is robust but skilful. This distinct architectural style is displayed at some of the sites that have been declared as World Heritage by UNESCO. These are the Sans Souci Palace (declared a WHS in 1982) and the Colonial city of Jacmel. Despite having a rich, diverse cultural heritage, Haiti is in a danger zone, because of its susceptibility to natural disasters, mainly earthquakes.

A tectonic fault line that runs through Haiti makes it prone to Earth shattering earthquakes, that cause damage to archaeological culture as well as existing modern infrastructure. In 2010, a 7M earthquake hit Haiti near Port au Prince causing an estimated 200,000 deaths.

Environmental and infrastructural restoration of Haiti has been underway since the terrible calamity. UNESCO mobilized help to Haiti as soon as the earthquake inflicted its damage, and efforts have been made with regards to the laws pertaining to the preservation of cultural heritage. The objective was to move past the disaster and salvage the remains of what was lost. Economic and social stability were the main goals of all the restorative projects undertaken by various organizations. The MUSEUM International, no. 248, published by UNESCO, contains information about the cultural and structural reconstruction of Haiti, and also highlights the importance of museums as a place for archival.

Much of the information is about laws regarding the preservation of cultural heritage. At the government level, Yves Andre Wainright, who has served twice as the Minister of Environment for Haiti, says that unity among the members of Haitian society is important and the realization that they are united against a common challenge.

The overt effects of natural calamities such as earthquakes are apparent on physical historic structures. However, the effects of such disasters on the intangible heritage must be studied in more detail. In a conversation with Dr. Viraj Shah, a Phd in Archaeology and a professor of Literary and Cultural Studies at FLAME, she talked about how material culture is affected by natural calamities.

“Archival is extremely important for the preservation of cultural material in order to reconstruct our past in a systematic manner. It needs to be done immediately.”

It is clear that all visual, textual culture and artefacts are contributing elements to viewing our past from a rear view mirror, as the present ticks on. Jacmel’s ‘self-restoration’ of material culture post the earthquake is exemplary of this concept. Thus, we must understand that the chronological arrangement of our past enables us to view an era where cultural constructs were vastly different.