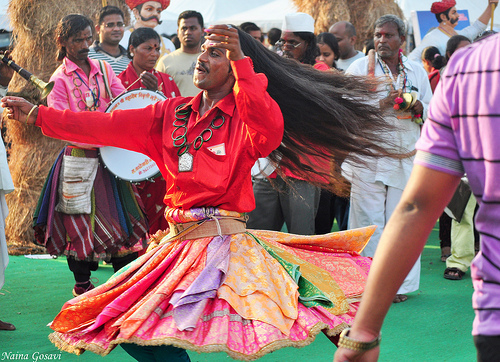 I saw him one warm afternoon, outside a quiet, yet popular café in Pune in India. He was dressed in layers of sari-like cloth below the waist while his tanned chest remained bare. His eyes were smudged in heaps of kohl. The yellow paint on his forehead seemed to burn in the afternoon sun and the garland of bangles around his neck matched perfectly with the vibrant sticks he was carrying to play the percussion instrument.

However, this costume wasn’t what was bizarre about him. Rather, it was the bright orange whip – almost about four feet in length – knotted heavily on top with which he came flogging himself, singing hymns of the lord, was something that took me by surprise.

This is a crazy Potraj, pay no attention to him! exclaimed a passerby.

“But here was a man, inflicting pain on himself, in the name of god or perhaps for money?” I wondered.

The sight of him remained stark in my memory until a few years later when I found myself wandering through the Peths of Old-Pune, to catch a glimpse of him and his community, and to find a little more about where they came from.

The internet had failed me and so had the locals. So I decided to dig deeper and explore the bustling by lanes of the Peths in Pune. I was informed that I could find the Potraj at the Shri Bhavani Mata Mandir (Temple of goddess Bhavani) in Bhawani Peth. It was already dark, and the small aangan of the temple was literally empty. A Brahmin sat at the far end, quite surprised to see me, as I made my enquiry about the Potraj.

Potraj- you find them here roaming about in the morning, but that’s not every day. It depends on your luck. Come day after during Shiv Jayanti and you might find them here, he said in his impeccable Marathi.

Dejected, I started to turn away.

Unless – he muttered after a pause -If you are willing to venture to Kasarwadi- which is about a 10 minute walk from here. A few Potraj live there. Although, I don’t know how appropriate it would be at this time…..

I will go, I said before he even finished his statement. Sensing my excitement, he called for a sevak. “Take her to Kasarwadi!” he ordered. “They want to meet the Potraj”.

We walked through the dimly lit lanes of Kasarwadi. People came out of their small, yet vibrantly painted houses. The streets were chaotic unlike the angan in the temple. We were welcomed, with uncomfortable stares and curious faces. Finally, at a chowk, we were introduced to them. An old man, dressed in a simple white dhoti and kurta, and another wearing a normal T-shirt and jeans. “We are the Potraj”, they announced.

The Potraj Community is one of the sub sections of the Maang / Matang caste that are largely found in Gujarat, Daman, Rajasthan and Maharashtra. The Potraj people are avid worshippers of Goddess Kadak Lakshmi, a divinity they say, hails from the town of Kolhapur in Maharashtra. This community also called the Kadak Lakshmi nomadic tribe, travels from one temple to the other, singing religious chants, playing the drums and dancing to it and violently flagellating themselves.

Treading a new road: The Potraj

As I waited, he appeared again, dressed in a pale white shirt with fringes of sari-like cloth, cut and stitched together in a skirt like fashion. His torso adorned a green embroidered cloth, and around his neck was a garland of bangles and a necklace which had a silver pendent of goddess Kadak Lakshmi. But what stood out the most was the heavily braided, red whiplash or ‘korda’ as they called it, going around both his shoulders. He wore ghungroos around his ankles with a base of hard-coiled cloth. This attire is called Devi cha Alankar (the costume of the goddess), he said.

He walked in a fashionable way, the ghungroos around his ankles jingled perfectly with the rhythm of the drums. Chanting a Marathi prayer, he danced, his firm expression transforming into an animated smile.

I waited in anticipation for him to start using the red whip that went around his neck and shoulders. Without a moment to miss, he strung it out and starting lashing himself – almost rhythmically. The rear pointed end of the whip formed several patterns on his body. While I cringed, the people awed in amazement, but he remained indifferent.

How can one smile after subjecting yourself to such intense pain without flinching even once? I demanded to know. And that’s why my curiosity became a heavy load.

Devyani Nighoskar is a writer at GoUNESCO. This is a first person account of her rendezvous with the Potraj Community, which will be published in two parts.

The traditional dance in Sardinia

The elegance of the traditional Serbian folk dance named Kolo