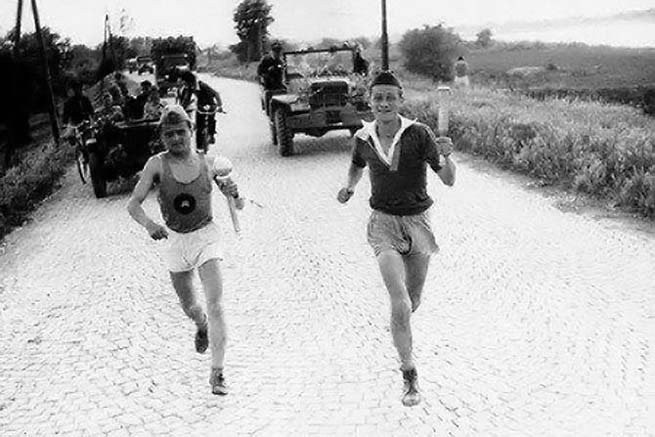 Relay of Youth was a symbolic relay race held every year in former Socialist Federal Republic of Yugoslavia (the country was made from six socialist republics Bosnia and Herzegovina, Croatia, Macedonia, Montenegro, Slovenia and Serbia) from 1945 until 1988. The relay batons was given to the lifelong Yugoslav President Josip Broz Tito on his birthday, May 25th, from the all young people of Yugoslavia. The batons were used to convey birthday wishes for life long and good health to Tito. The race began in Tito’s birth town Kumrovec (Croatia) and went through all major towns and cities of the country (in which was welcomed at mass gatherings) and ended in Belgrade (capital of Serbia) at Stadium of Jugoslav National Army (JNA). The race lasted aproximately one month and ended up with rally of the pioneers (children fro 7 to 15 years), youth and members of all ranks of the army and navy. Every year the event becoming more and more massive and by 1950 more than million people were involved in carrying batons. The public was daily informed, through radio and television, on the movement of relays and celebration organized in its honor. Batons were usually made of wood and metal, with mandatory five-pointed star or plastic torch on the top (the star was the simbol of comunism, while torch with six flames represent the brotherhood and unity of six republics). The Museum of Yugoslav History in Belgrade keeps over 22000 relay batons.

Relay of Youth was established in 1945 at the proposal of youth of Kragujevac city (Serbia) as a Tito’s relay. In the first Tito’s relay 12500 young people took part. They had run the route 9000 kilometres long and handed to Tito the first nine relay rod and the Blue Book with 15000 signatures of youth of Šumadija (region in Serbia). These first relays were handed to him in Zagreb (capital of Croatia). While the next years, until 1956, Tito received the last relay baton holders infront of White Palace in Belgrad, which was preceded by a ceremonial welcome at the Republic Square. In 1957, on Tito’s initiative, this event has been declared the „Day of Youth“ and become national holiday. In 1980 relay was on the road around Croatia when broke its journey on the May 4th, because of Tito’s death. It was laid down on the catafalque of president in the Federal Assembly. Relay of Youth continues its life and after Tito’s death, until 1988, and it was handed to the president of the Alliance of Socialist Youth of Yugoslavia (SSOJ) in front of Tito’s portrait. In 1989 SSOJ abolished this manifestation. The names of the event: Tito’s Relay (1945-1957), Youth Day (1957-1980), And After Tito -Toto (1980-1988)

1987 in Yugoslavia occured the scandal when in Ljubljana (capital of today Slovenia) was published the conceptual design for the relay made by the design studio “New Collectivism”. This was the refurbished German Nazi poster, a copy of the work „Third Reich“ by Richard Klein. But even the solution that was eventually adopted, differed from previous relay. It was made from plexiglas with eight drops of blood. Some interpret this as an indication of bloodshed in this region in the wars that followed the break up of Yugoslavia.

When Nuvolari Won – A legend over the limit