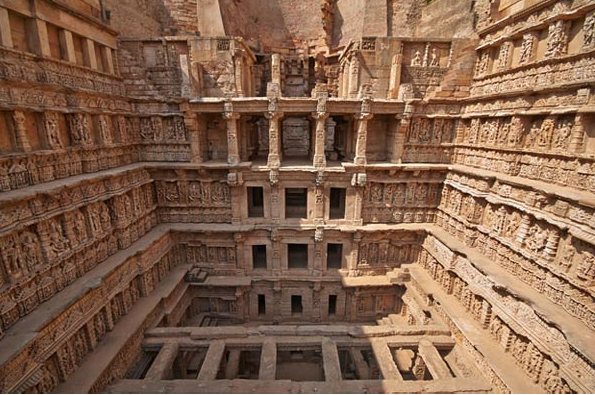 The Rani ki vav, situated in Gujarat, is a very intricately constructed step well, situated in the town of Patan, also known as the Queen’s step well,contains nearly 400 niches and many pillared multi-storey pavilions. It is located on the banks of the River Saraswati. It is not only a water resource but also an example of unique craftsmanship. It used to serve as a water resource for Patan ‘s Royal family .It was built in memory of the 11th century King Bhimdev, by his loving widowed Queen Udaymati around 1050 A.D ,and was added to the list of UNESCO sites in 2014. It has elaborate carvings and pillars .The stepwell is designed like an inverted temple with seven levels of stairs that are carved with mythological figures.The step well is around 30 km deep.There are nearly 800 sculptures carved on the inner walls of the step well.These sculptures include images of Lord Vishnu, Shiva, Brahma, Ganesha ,Goddess Laxmi and other Apsaras and yoginis.

It is believed that the water had medicinal importance because of the presence of certain plants that could cure viral Fever and other ailments. In those days people used to flock to the well to get the water and people used to travel from nearby villages.

The site today is well preserved and maintained with lush green grassy areas for visitors .It is a very common to see people making a one day trip from the city of Ahmadabad just 127 km away from the city to see the well and marvel at its craftsmanship.A visit to Patan is incomplete without a visit to Rani Ki Vav. State Transport buses run from Ahmadabad to Patan. Travel by air and train is also a very convenient way to travel to this historic place.