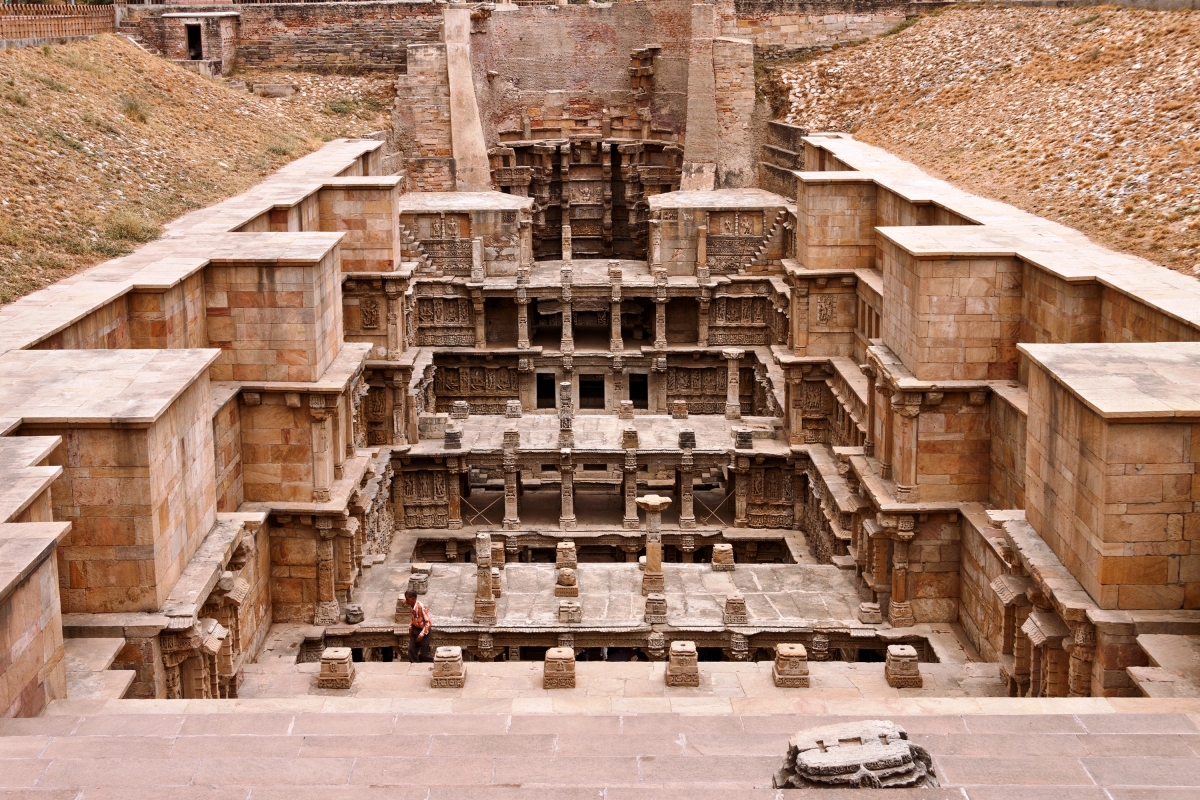 During the rule of the Solankis (also known as the Chalukyas) in Gujarat, many grand monuments were built between the 11th and the 12th centuries CE. The surviving monuments include temples at Somnath, Modhera, Sidhpur Patan, reservoirs such as the Sahasraliṅga Talav at Patan Anhilwad, and stepwells such as the Ran-ki-Vav, to name a few. (Dhaky 1961:passim).

The Ran-ki-Vav[1] or the ‘Queen’s stepwell’ is situated in Patan, a heritage town located 125 km north of Ahmedabad, which was the medieval capital of the Solanki empire. The stepwell, a sacred memorial built entirely below ground level, is one of India’s most unique contributions to the architectural heritage of the world, and UNESCO has recognized it as such in 2014.

Stepwells which were developed in the arid region of Gujarat and Rajasthan in Western India are some of the finest examples of vernacular built heritage in India.. In their earliest forms, nothing more than plain dressed stones protected the sides of a sandy pit, hence the underground passage was kept as short as possible. Gradually, architects devised the means to strengthen these structures and the corridors were expanded vastly in length and width. Other developments included landings at regular intervals, pavilions with multiple storeys, and stepped passages, which to begin with were only a practical adjunct to the wells but later acquired a character of their own. In this way, the humble village well, that ubiquitous sign of human habitation, transformed itself into a strikingly original and complex architectural form.

Since the construction of watering places was considered to be a meritorious act, especially to commemorate the dead, innumerable stepwells were built over the centuries in western India. In the barren and the featureless landscape, these subterranean structures with their ornate interiors make a strong impact on the mind of the visitors who chance upon them. The Ran-ki-Vav (Fig. 1) was built during the third quarter of the 11th century by Queen Udayamati,mother of the monarch Karṇadeva, who was known for his vast territorial possessions and continuously expanding wealth. She had commissioned this step well as a memorial to her husband, the Solanki king Bhīmadeva I, who during his reign had built the great Sun-Śiva temple at Modhera[2]. Ran-ki-Vav was the most ambitiously conceived stepwell of its time. Its design and execution must have called forth all the experience and resourcefulness at the disposal of its builders. It is amongst the largest in Gujarat, and in terms of its sculptural wealth surpasses all others.

The stepwell faces the east and possesses all the four principal components of a fully developed structure of its type. These are: a stepped corridor beginning at ground level and leading down to the underground masonry reservoir (kuṇḍa), compartmented at regular intervals by multi-storeyed pillared pavilions; a draw well at the rear end (Fig. 2); and a large reservoir for collecting the well’s surplus water, located between the stepped corridor and the well. At the head of the monument, at ground level, there was a toraṇa or ornamental arch, a ceremonial freestanding gateway often seen in Gujarat, which is no longer there. The length of the stepwell measured at ground level of the toraṇa to the far side of the well is about 65 metres, or 213 feet. The four intervening pavilions, which demarcate the stages along the descent, has an increasing number of storeys with the roof of the top storey of each of the pavilions reaching up to the ground level. Interior of the Ran-ki-Vav Stepwell

As stepwells were subterranean structures, their builders were confronted with unique problems not encountered in the construction of temples and other monuments. The builders were required to dig a trench, construct an underground staircase to the bottom of the well, and to build strong embankments against the sides of the trench in order to protect this path from the sandy soil of Western India. After much experimentation through the centuries—during which hundreds of stepwells were built—by the 11th century architects had perfected a design and a simple but efficient method for constructing these underground structures. An interesting feature of the monument as a whole is the presence of hundreds of masons’ marks on various parts of the stepwell. These marks, which are found on some other monuments as well, served the practical purpose of helping identify the artisans or their guilds, in order to settle their dues at the completion of work.
The sheer scale of the stepwell is remarkable in terms of size, profusion of sculpture and quality of workmanship. The sculptures enhance the corridor’s walls, the pavilions and, exceptionally, even the inner circumference of the well itself. In Puranic mythology, God Viṣṇu assumes avatāras or incarnations for the good of humankind. Seven out of Viṣṇu’s other avatāras are found sculpted at the Ran-ki-Vav. The large images alone, even in the stepwell’s present ruined state, number some 400. Had all the seven levels of the monument been fully furnished with all of their planned sculptures, the total number would certainly have been at least 800.

Ran-ki-Vav has suffered extensive damage in the past. There is evidence that repeated flooding of the Sarasvati River brought down the upper parts of the structure leaving heavy deposits of sand. Then, in the early 19th century, entire pillars and structural components of the upper storeys of the pavilions which collapsed but did not get buried under the sand were carted away by the owner of the land. They were at the time and used in a new stepwell known as the Barot Vav in Patan itself. Submerged by the river’s periodic deposits and despoiled of its visible remains, Ran-ki-Vav underwent neglect. Although its existence was known of, it received little attention over the following century.

Since the 1980s, the Archaeological Survey of India (ASI) has carried out desilting of the monument, realigned the walls and structural parts and reset the surviving sculptures. The stepwell originally consisted of seven storeys or terraces, though only have five survived. Although, the upper terraces as seen today have been extensively restored by the ASI.

[1] In the official records of the Archaeological Survey of India, the stepwell is named as ‘Rani ki Vav’, which nomenclature is erroneous (Mankodi 1991:30, fn. 2).

[2] Ever since the Modhera temple was brought on archaeological record in the early 20th century, it has been considered to be one dedicated to the Sun god. It has been argued recently that the temple was meant for a blend of the Sun god and Śiva rather than for the Sun god alone: Mankodi, 2009:177-198.

The photographs were taken by Dr Kirit Mankodi for the Project for Indian Cultural Studies,
Mumbai.

curated by him on the history and architecture of Ran-ki-Vav. For the complete module,
visit: http://www.sahapedia.org/ran-ki-vav

Romania in Italy: A discussion of Culture and Education