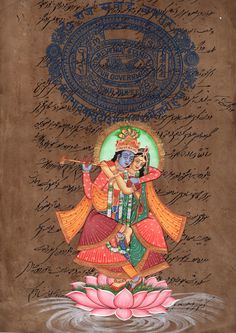 This article is written by Saif Ansari. It was originally published on www.nazariya.in,  an initiative that is connecting rural India to metropolitan cities

The detail and precision of old stamp paper paintings, as well as their ‘vintage’ character makes them stand out among the various crafts that thrive within Rajasthan.

Rajasthan has played quite an important role in the development of artistic techniques in India. The fine detail that is distinct to handicrafts and paintings coming from Rajasthan is testimony to this. Thus, this heritage city is a treasure trove of arts and crafts that define India’s identity to some extent. The technique of creating ‘miniature paintings’ requires a great deal of dexterity. Sketched out and painted onto tiny, old stamp papers, these paintings are the epitome of precision.

Critiques are said to gauge traditional paintings according to their size. However, the level of detail involved in the creation of the painting is an important factor too. Despite being tiny, the miniature paintings of Rajasthan involve a heavy level of detail in their creation. Zooming into the painting, one often observes brush marks scaled down to the smallest size possible. This enables the creation of textures to the fullest extent, with the highest detail. Thus, the paintings have an earthly, almost naturalistic charm.

The Hindu rulers of Rajputana held strong political and social ties with the Mughal court. This interaction is observable through the Mughal influences in these miniature paintings. The nature of human forms depicted within these paintings is characteristic of the Mughal technique.

The courts of kings and their lives often formed the subject matter of these paintings, which depict court assemblies, the hilly landscape, religious festivals, public processions and Gods like Krishna as well.  The stamp paper used to create these paintings is another factor that distinguishes them from other Indian techniques. The texture of the paper is what provides the basis to the texture of these paintings. The colors comprise of minerals, vegetables, as well as precious stones and metals.  Then brushes used are extremely fine, and created from the tail hair of a squirrel, which is procured without hurting the animal.

The surface design is a key factor in gauging the quality of a painting. However, the increasing complexity of art appreciation as a field, as well as the increased symbolic value of art itself has enabled critics and art historians to look at paintings from varied lenses. The paintings show the grandeur synonymous with Rajasthan, and the tales of romance and bravery that dot its cultural past.

The decline of the traditional paintings in Rajasthan began after the first half of the 18th century. By the end of the century, it lost its economic viability and widespread popularity. In the Pahari region, however, the tradition held on until the 1st quarter of the 19th century. The increasing influence of Western techniques of painting and color creation led to the ultimate decline of the practice in the later half of the 19th century.

A Picture is Worth a Thousand Words. Gaatha Online. May 17, 2010. Web. http://gaatha.com/minitature-painting-udaipur/

Imagining the City and the Home for Modern India

Bengaluru in medieval and modern frames