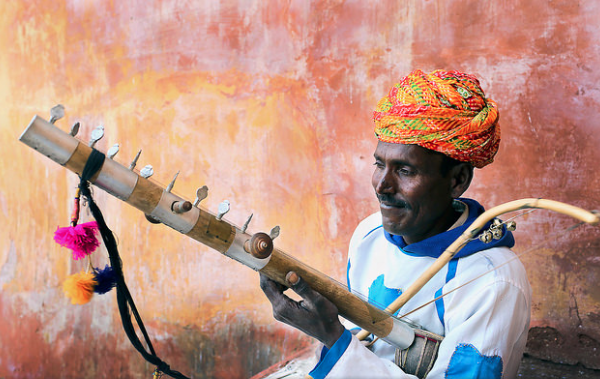 Rajasthan folk music an important part of the culture of Rajasthan which has been preserved with the passage of time. Rajasthani music is largely related to village, tribal life and the simplicity of it. Its lyrics largely talks about valour, love for one’s motherland, love stories, tradition, worship, or even day to day life.

The music is generally accompanied by traditional dance, and its performers are seen wearing bright turbans, and traditional clothes. Rajasthan Folk music was largely part of the royal courts of Rajasthan and the flavor it renders was largely influenced by courtly life and its support of it. Royal patronage is one of the major reason for its development.

The style has several instruments associated with it. Some stringed instruments like Sarangi, Rawanhattha, Morchang and Ektara are commonly used to provide instrumentation. Instruments of different shapes and sizes like huge Nagaras which were integral part of royal courts used during war and arrival of king are also used. Accompanied by Dhols and tiny Damrus, the instrumentation provided is diverse. Under the category of air instruments flutes, Shehnai, Poongi, Tarpi and Been are some of the instruments in which state of Rajasthan has excelled in the manufacture of.

One of the intriguing things about Rajathani music is that it follows the hierarchy system.  Most of the families in this line have family history of music which even dates backs to several hundred years. That is the reason we see 6-7 year old kids performing on stages.

There are several communities like Manganiyars who specialise in Dholaks and Kadtal and the Langas who  are known for instruments like Sarangi, Murali, Surnai. The style of music composition is distinct to each community, and the type of instrumentation and the themes focused on vary as well.

Lost in the wilderness: how to find your way back to civilization without a compass?

An overview of the Afro-beat movement of the 60’s