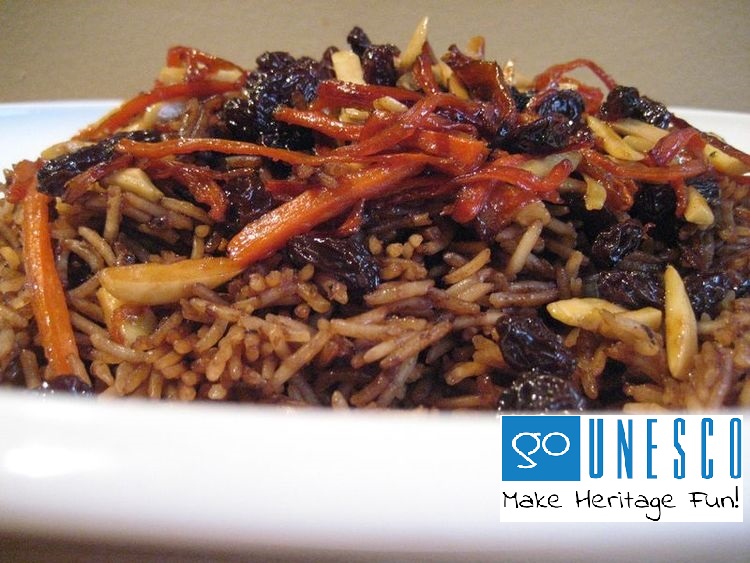 A Hungarian professor travelling to Central Asia and Afghanistan pointed out the distinct identity of the Qabli Pilav as a common Afghani preparation in the early 19th century. Previously known as the Yakhi Pilav (dating back to the 16th century), the dish is known to comprise a rich base of dry fruits which adds to its assorted flavor.

The Qabli Pilav is a dish prepared during Afghan festivity.

Boiled and fried meat is cooked with rice, and carrots, raisins and nuts (almonds, raisins, pistachios) are added to this mix. People often make the mistake of confusing Qabli with Kabuli, but the latter is derived from Kabul, the Afghan capital. Qabli is a type of fried meat. This is my grandmother’s recipe that we serve and eat at most social gatherings.

How We Do It at Home:

My grandmother cooks Qabli Pilav on a huge fire outside her kitchen in the yard. The children of the house team up to help her as well. This is the original way to cook the dish, but it can be cooked from the confines of a kitchen too. Eating this dish gives me a sense of belonging, since it is prepared during the festive season such as Ramadan, and often consumed in large familial groups. Several

Even though  Afghans have many obstacles in our lives, intangible cultural assets such as food and culture bring us together and develop a sense of kinship for one another.

Kabul is considered as the land of generosity and hospitality, and this energy radiates from its citizens. Afghani food is indulgent, and instils a sense of comfort in those eating it. If you ever visit Kabul, be sure to try out some Qabli Pilav – the soul warming food of Afghanistan.