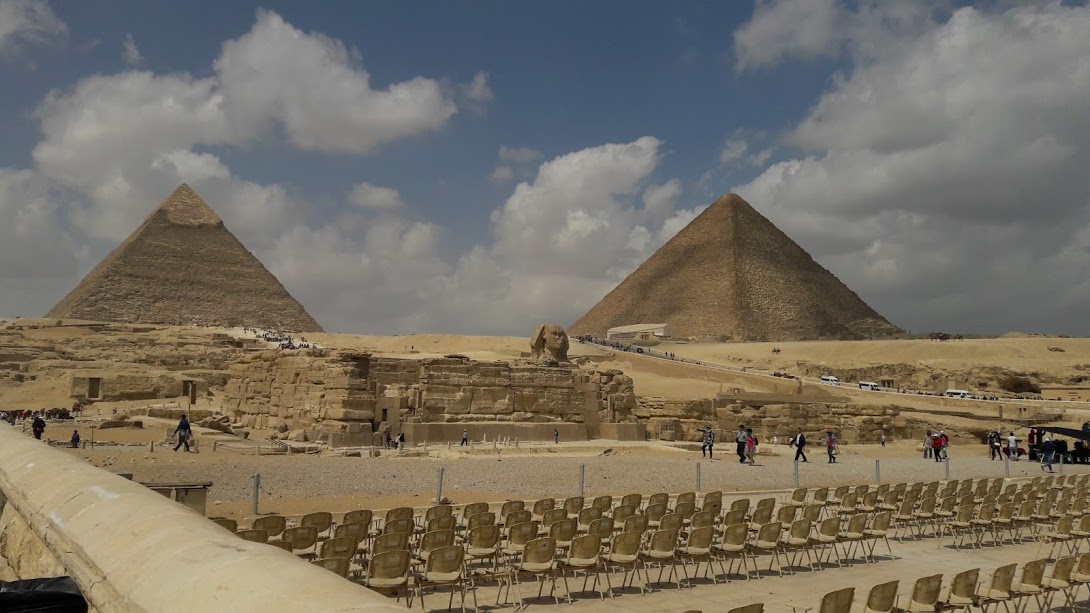 My visit to Egypt left me spell bound when I arrived at Giza. The Giza Necropolis stands on the Giza plateau on the outskirts of Cairo city. The Necropolis has an amazing collection of buildings constructed to house the dead Pharaohs and alight their journey into the Afterlife. It reveals a lot about the beliefs about life and death in the Ancient Egyptian Civilization.

As I entered the complex, I was struck with the mesmerizing site of the three pyramids towering in front of me.It is just unbelievable how the pyramids were built thousands of years ago in the desert and are one of the surviving seven wonders of the world. There is no wonder that they are visited by millions of people around the world.

Our guide had good knowledge and we listened to every word spoken by her. The pyramids of Giza are one of the oldest and the largest ancient monuments in the world. The main one is “The Great Pyramid” which is the tomb of the great Pharaoh Khufu is at times also known as the pyramid of Khufu. The height of this pyramid is 455 ft, and it is one of the tallest structure in the world. The pyramids are constructed so that each of its sides faced exactly north, south,east and west.

The 2.3 million stone blocks were cut from quarries along the river Nile.The blocks were transported by workers across the desert to the building site. It is believed that it took 20 years to build the pyramids. The other two pyramids were also equally impressive, and  built for the King Khafre and Menkaure. The pyramid of Khafre is the second largest pyramid in the complex and it is the tomb of the fourth dynasty Pharoah Khafre or Chephren. It has two entrances leading to the burial chamber.

Of the three only Menkaure ‘s pyramid is seen today sans the original limestone casing. The site also contains The Sphinx; a mammoth statue of half lion and half human mysteriously guarding the three pyramids.It is one of the largest single stone statue on Earth. Looking at the concepts of sacred geometry and mathematics imbued within ancient architecture truly reveals how back in the day, architects truly knew what they were doing!

The Carnival of Ivrea: A war of oranges