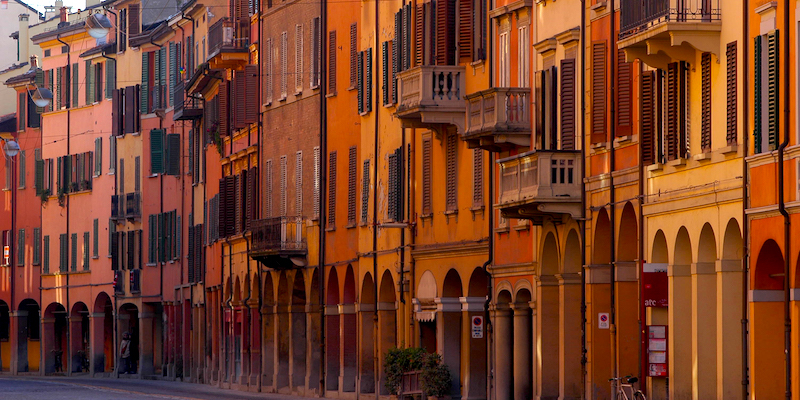 Have you ever been caught by the rain with no umbrella and hoped for a shelter to keep your shoes dry and shiny?

People living in Bologna, a well-known university town located in North-Eastern Italy, never suffer from such trivial worries. The heart of the city is almost entirely covered by the so-called porticoes, that is according to Oxford Dictionary “a structure consisting of a roof supported by columns at regular intervals, typically attached as a porch to a building”.  The word dates back to the Ancient Roman age from porticus, meaning ‘porch’.

No need for an umbrella for almost 40 kilometers!

These porticoes extend for 38 km within the city center and can be considered the town’s most distinctive feature. If their extension does not impress you enough, please take note that this peculiar architectural element articulates into a multiplicity of styles, which includes medieval wooden porticoes, renaissance frescoed, and severe post-world war II ones, spanning from the early 11th to the late 20th century.

The Bolognese porticoes, whose name might sound familiar as it reminds one of a famous (and absolutely non-authentic!) noodle dish, have been inscribed on the UNESCO Italian Tentative List as early as 2006. Until now, authorities have not been able to draw enough attention on this spectacular patrimony due to a series of issues.

A Tentative List is “an inventory of properties which each UNESCO State Party intends to consider for nomination” and represent the first step in the procedure for a site to enter the UNESCO World Heritage List.

Porticoes exist in most European cities developed during the Middle Ages, such as Prague, Padua, Berne and Madrid, however they were never a strong feature on the urban territory, with the only exceptionin Bologna.

Why is that? Porticoes served initially as alternative dwellings and market spaces in times of poor control by local authorities and steep economic development.  However, during the 12th century authorities started prohibiting further invasion of public space and thus stopped the construction of new structures.

Conversely, porticoes became compulsory in Bologna because they were considered useful for the preservation of public space and the activities that were to be conduced on it. Basically, Bologna councilmen gave their peers a good example about how to see the glass half full, and the citizens demonstrated to deeply appreciate porticos since the earliest times.

Storytelling under the arches

Most interestingly, porticoes tell us stories of times that would be easy to forget in our daily rush. The section of San Luca porticoes comprises a spiraling series of 666 (the number of the Devil, according to Christian Catholic tradition) arches that leads uphill to a Vergin Mary Sanctuary which celebrates her victory on the evil snake.

The Meloncello arch was recorded by many travellers on the Grand Tour d’Italie in their journals and was described in March 1790 by the French painter Charles Nicolas Cochin as a “sort of architectural pavilion […] the product of creative genius”.

The Podestà portico transmits sounds from an end to another of its squared porch by producing an outstanding acoustic effect, supposedly with the aim to allow those carrying infecting deadly diseases and suspicious fellows to receive sacraments with no need to approach priests.

As years pass by, the local municipality has been trying to educate its citizens to respect porticoes as a constitutive element of their urban culture. The Bologna Portici Project originated in 2013 from the compelling necessity of extensive restoration and maintenance to promote active citizenship and encourage its collaboration.

The project is just one element of a series of initiatives which started in the same year with the goal of ultimately highlighting the significance of porticoes as an architectural and cultural heritage site worth the UNESCO List.

In this sense, porticoes are not merely a distinctive historical and architectural element of the urban territory. Most importantly, they also become a way of understanding the network of cultural and social relationships that builds up the city’s human community and embodies its soul.

“Porticoes represent an alternative paradigm of social relationships in the public space, an exemplary model for urban sustainability to be looked at, characterized by its peculiar uniqueness.”

The train awaits you at Australia’s first station