Port-Harcourt is the capital of Rivers-State and is widely known as the Garden City of Nigeria. Famous as an oil producing city of the Niger Delta and for its vibrant night life entertainment, this bustling city embodies the prolific cuisine of Southern Nigeria. A food crawl around this modern city showcased a wide variety of foods that are indigenous and culturally significant. What to eat when you visit Port-Harcourt is not a problem, as there is myriad of options to choose from when it comes to stuffing your gob. There are several upscale or regular restaurants, fast food vendors, eateries and streets food serving appetizing and affordable soups, stews, street foods, rice dishes and fruits etc all making for a richer food culture in Port Harcourt city.

When it comes to a quick bite for refuelling and energizing as you take a walk down town “PH” (as it is famously called) there is a wide variety of street foods to choose from:

This to me is the crown jewel of all street foods in Port-Harcourt city. The city often munches on Bole (roasted plantain) and Fish (roasted fish). Without doubt the PH City Bole and Fish is the best known to residents and tourists too. The food is so mainstream that it has its own festival named after it (Bole Fest) to promote the uniqueness of roasted indigenous delicacy. Also, in every street corner across the city you’ll find women preparing them and nearly everyone from different works of life indulge in eating Bole and Fish. It is an easy lunch break delicacy. This roasted Plantain (Bole) and roasted Fish is served with a sauce topping made from palm oil, pepper and spices and garnished with freshly chopped onions and vegetables for a delectable experience. A trip to the city is not complete until you’ve had a taste of this delicacy. A serving of bole could set your pocket back for as little as N500($1.39). Other street foods includes, abacha (African Salad), pop-corn (made with powdered milk) etc.

If you go to any parties in Port-Harcourt and Nigeria, or take a walk on the streets, or visit the restaurants and eateries you will find confectionery foods such as meat-pies, buns, egg roll, puff-puff, fish pie etc. These are also known as “small chops” and are usually served as starters at parties. They are made from a mixture of flour, baking powder, sugar, evaporated milk, nutmeg (for authentic taste) and different stuffing’s and can either be fried or oven baked. They cost as little as N10 – N 300 ($0.0278 – $0.83)

This Riverine city has a rich array of soups that are of cultural significance to the various ethnic groups that make up the State. The Fisherman Soup is native to the Kalabari or Okirika ethnic groups and is made using a variety of sea foods. The dish is a trade mark of the Riverrine areas of Port-Harcourt.  The Okazi soup is native to the Ikwerre Ethnic group of Port-Harcourt city and it is made using large chunks smoked beef, the Okazi leave, spicies and thickener. Other types of soups found in the city include Afang Soup, Oha Soup, Egusi, okra, offor and Banga Soups etc. All these soups are accompanied with a side of Garri (cassava flour), FuFu (fermented processed cassava) commonly called Loi-Loi in Port-Harcourt. One can even opt for a side of Pounded Yam, depending on preference and palate. A serving of any soup with Garri at any high-end or local restaurant in PH city can cost as little as N350 – N2500 ($0.997 – $6.94). 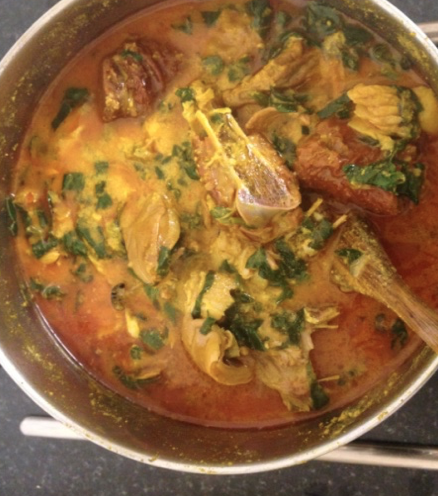 Another popular food in this category is the pepper soup. The pepper soup is a meat/fish spiced broth with a peculiar spice mix. It is commonly made with catfish, goat meat or chicken and is usually eaten with a combination of yam, plantain or rice.

The famous of all rice dishes in Nigeria is the “Smoky party Jollof Rice.”This classic one-pot, no-fuss rice dish is always served at every party/ceremony in Nigeria, and any average Nigerian would have eaten thousands of portions of Jollof rice through his life. Although there are variants of rice dishes in various West African countries in Nigeria, Jollof is the best, without question. Other rice cuisines that can be found in restaurants and fast food eateries around PH city include fried rice, coconut rice, native palm oil jollof rice and boiled white rice which is eaten with tomato stew. A serving of jollof rice from both upscale and regular eateries could cost as little asN250 – N2500 ($0.69 – $6.94)

Port-Harcourt city is truly the Garden City of Nigeria, with unique indigenous food culture and great hospitality. Walking through the streets, one can easily find something that satiates their tummy!

Hatay: The UNESCO city of Gastronomy

Parantha; a staple in the North Indian household