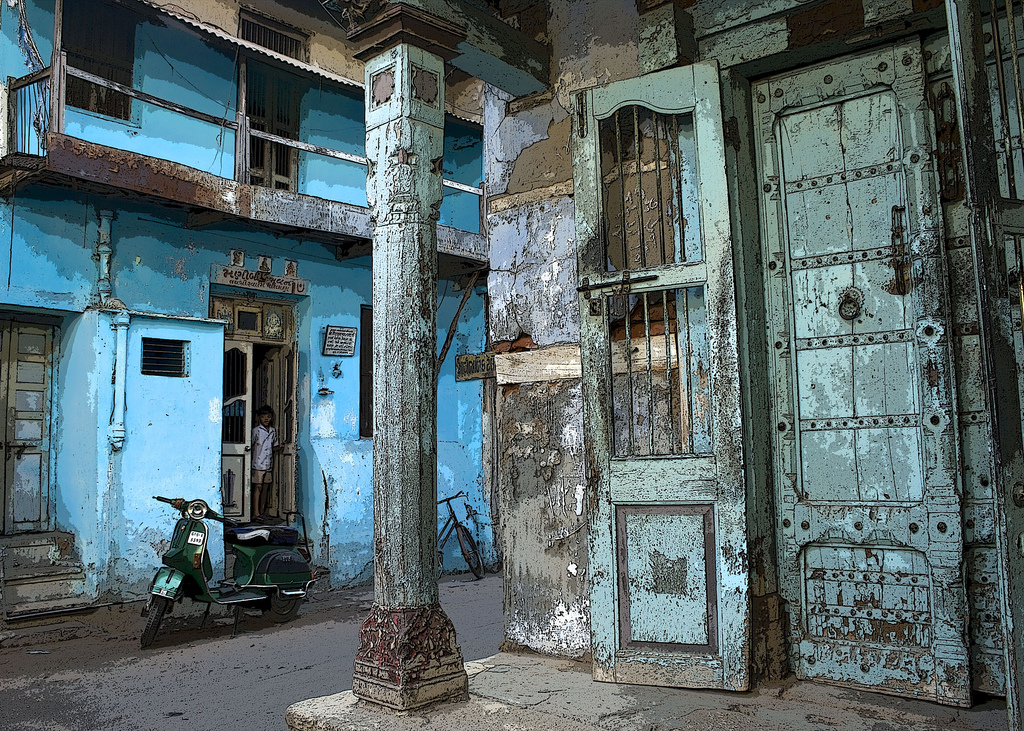 UNESCO has declared Ahmedabad as a world heritage site, thereby becoming the first Indian city to get this status. This article on the Amdavadi Pols by Devyani Nigoshkar was written earlier this year and talks about how efforts were being made to  get the city into UNESCO’s World Heritage City list

The sun splinters through the rims of the French balcony, subtly lighting up the meandering lanes beneath. The windows, half broken creak, but the dusty wooden doors remain locked. The chabutro (bird feeder) in the courtyard awaits its first flock, and the walls in red, yellows, blues, and greens, become a shade richer, as the dawn slowly casts its magic.

The bells in the temples have begun to ring and very soon these clusters of houses that make you feel like you’ve stepped back into a century old Gujarat will rumble and get on with their daily lives. These old housing clusters or the Pols of Ahmedabad have not only survived the test of time, they are still very alive and brimming with the Gujarati culture.

Built in the times of communal tension and social unrest in the region hundreds of years ago, the Pols (derived from the Sanskrit word Pratoli meaning gate) are a conglomeration of houses that were usually inhabited by people and families linked together with caste, culture or profession.

With huge courtyards- A Gujarati household essential, intricately carved wooden facades and frescoes and colourful exteriors, the pols were not only bright and lively but also strategically built for safety and security during the war. Along with having a front entrance, each Pol had a back entrance for the women and children to escape to the labyrinth of lanes that connected the pols whereas the men used the front entrance to face and negotiate with the enemy. Ever since then, these Pols have harbored life and culture and given way towards the urban lifestyle. Most of the people living in the Pol are cottage industry workers and can be found sitting on the charpoy (cot) in their courtyards, stitching, binding books, sewing etc. The nonchalant Gujrati chatter that falls upon your ears is interesting to decipher, but perhaps what is more intriguing are the bemusing names of these pols and the stories behind them. The 19th-century laureate Poet Dalpatram, notable for Gujarati and Sanskrit poems would welcome you to his house in the Kavi Dalpatram Chowk in Lambeshwar ni Pol, as he sits in the huge paved courtyard in the form of a glimmering bronze statue, installed by the Ahmedabad Municipal Corporation. Just ahead through the tangle of bylanes is a murky well surrounded by shabby rooms on either side. The well was the primary source of water for the nearby pols until it was shut in 1962 by WHO officials stating that the water was unhealthy. Not surprisingly, this pol was named as the Kuawala Khancha Doshiwada Ni pol which literally translates into the salty water well pol.

Every few steps, there will be a small alluring temple with ornate pillars, magnificent deities and white marbled floors each with its own gripping anecdote. The 300-year old Ram temple, situated inside a huge haveli in the Haja Patel ni Pol houses a black-colored deity of Lord Rama, which according to a popular legend, was painted black in colour so as to protect it from the Mughals. The temples usually had a low rise gate for the Mughals never entered a temple where they would have to bend. The cows too would walk alongside you in the congested pol lanes for they form an important part of the Hindu culture, especially in Gujarat. The Pols in Ahmedabad have been built to suit the needs of the mother cow. Most of the multi-storey houses are in steps, so as to provide a greater shelter area for the cattle to rest on during the rains or the scorching heat. The pol people are definitely caring animal lovers. The Chabutro, beautifully designed in a multitude of colours can be seen in every courtyard to compensate for the loss of trees that happened in the building of the pols.

The exclusive architecture of the pols is heavily influenced by many different cultures. At a particular junction, three high-rise buildings of a pol stand. While one has a symbol of Peshwas on the entrance, indicative of the Maratha culture, the other culture depicts the Persian cliché of graveyard wines on the rims. The Mughal architecture can be observed on the windows whereas the grandeur of the pols is enhanced by the baroque style of architecture. Another house has an oriental design with dragon cravings etched on the todla (a large wooden peg driven into the wall). Apparently, a Chinese architecture visited the owner and due to the communication gap, the architect ended up making a unique Indo-Chinese design.

The pol houses are typically small and compact with low rise ceilings, but the rooms inside appear quite spacious. The chowks which are open to the sky are essential parts of such housing systems and provide space for people from different pols to interact and enjoy recreation.The havelis that adorn these pols boast of exuberance in the past times and still uphold many secrets and mysterious passageways, structural wings and romantic alleys. The Harkunwar Shethani ni Haveli is 180 years old and has 60 rooms, each which opens to a pillared balcony held with a beautifully carved wooden girder. But what makes these pols so appealing to the eyes are its colours. Yellow walls, with deep green windows, pink walls with bright orange ornaments, the buzz of colours in the pols reflects the colourful chaotic lives the pol residents have.

A walk through the boulevard of the pols during the day time is bound to leave one’s taste buds tingling as the Khakhra makers get to work and to satiate those cravings, the pols, the commercial counterparts of the pols have many shops serving mouth watering Khaman, Khandvi and Dhokla. The shops in these commercial alleys are owned by the pol inhabitants who have made their abode just above their shops. Thus, even after the hours when the shop has been closed, a knock on the door enables instant service 24/7.

A lot of Gujarati towns till date have the pol culture, but the Amdavadi Pol is perhaps the most developed and the most integrated. The culture is upheld in prestige, and this is the reason why a lot many people refuse to move to the new city with better infrastructure. Most of the pol residents have to pay a rent of  10 rupees per month, and its proximity to the market and the railway station is what makes these pols, a lucrative option to reside in.

Vernacular Built Heritage, becomes an essential part of not only the place but also a trademark of its history culture and lifestyle. Thus, it needs to be preserved and the local governments need to play an important role. Debashish Nayak, Director, Centre for Heritage Management of Ahmedabad University and the advisor to the Heritage Programme of Ahmedabad Municipal Corporation for the revitalisation of the ‘Historic Walled City’, says, as part of awareness building and maintaining these Pols, initiatives have been taken on various levels:

• There are ten heritage walks with different themes conducted in the walled city of Ahmedabad.
• Coming up with enabling policies such as TDR and other such incentives for Pol house owners to encourage the restoration process of heritage houses and consequently the maintenance of Pols.
• Upgradation of community spaces and services in these neighbourhoods
• Facilitating restoration projects of heritage houses in these neighbourhoods
• Efforts towards getting the city into UNESCO’s World Heritage City list, which in turn will help come up with a better heritage management, plan for the walled city of Ahmedabad

The Pols in Ahmedabad are certainly something different. The old door creaks, the friendly yet wrinkled face of Baa looking out of the window, as her middle-aged son looks for his vehicle, in the alley that is now lined with scooters and bicycles. He looks back and smiles at her, he shall be back home soon. The people have advanced with time, but have held on to their roots, to the culture they came from, to the place where they have lived for generations, the pols are here to stay for a long time to come.

All photos by Hrishikesh Dalvi

Themes at GoUNESCO – July to December 2017