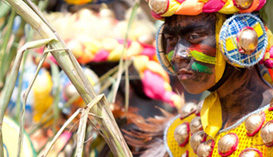 The Child Jesus is a central figure of the Dinagsa Ati-Atihan festival.

Dinagsa Ati-Atihan: “Dagsa” (to come together in groups); “Ati-Atihan” (to act like an Ati, an indigenous group from Negros Occidental)

The festival serves as a commemoration of the Philippines before and after the Spanish colonization. Prior to the arrival of the Spaniards, Filipinos largely practiced “animism” where Nature and its elements are given glory and praise. Scholars attribute the “Dinagsa” and “Ati-Atihan” features of the festival to the Philippines’ pre-colonial roots; and the “fiesta” factor to the country’s Spanish colonial history. The festival is also now largely religious, with Santo Niño (Child Jesus) ultimately given homage on this week-long festivity.

To know more about the festival: http://www.cadizcity.gov.ph/dinagsa-festival/

Quiz: We Can’t Have Enough of the Indian Heritage