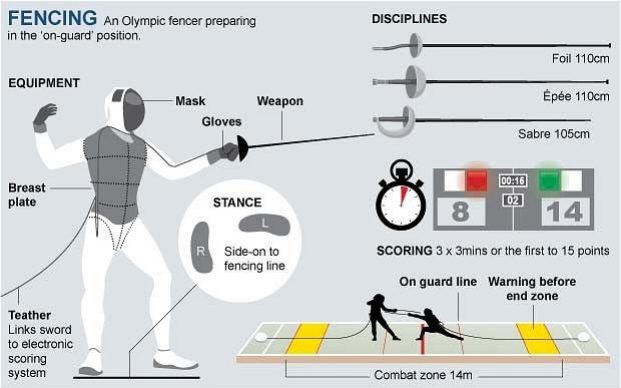 Olympic fencing, is a ‘contact sport’ in which competitors fight using swords. Fencing is one of the four sports featured in every modern Olympics from the start in 1896 in Athens. 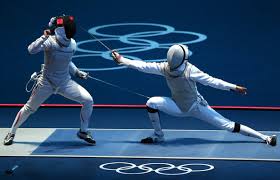 There are three different types of swords, and thus three different versions of the sport. Each of them have in common the main rules of the game, which is about the way to make points: competitors have to touch a part of the body of the other with their sword.

The participant wear protective clothing, including a wire mesh face mask. The measurement of scoring is done by a referee, helped by electronic equipment. Points are done by ‘hitting’ opponents with the blade or tip of your sword, which is wired to a buzzer that sounds to indicate valid contact. Coloured lights register valid hits, while white lights means non-valid point.
Matches consist of three 3-minutes rounds. The first competitor to realize 15 touches, or the one with most points after three rounds, is declared the winner.

The rules of modern fencing were created  in the 18th century in an Italian Renaissance school of fencing and was then improved by the French school. It was originally created as a military training and was transformed in a sport by Domenico Angelo during the mid-18th century.

The Heritage of Sport : 1936 Summer Olympics