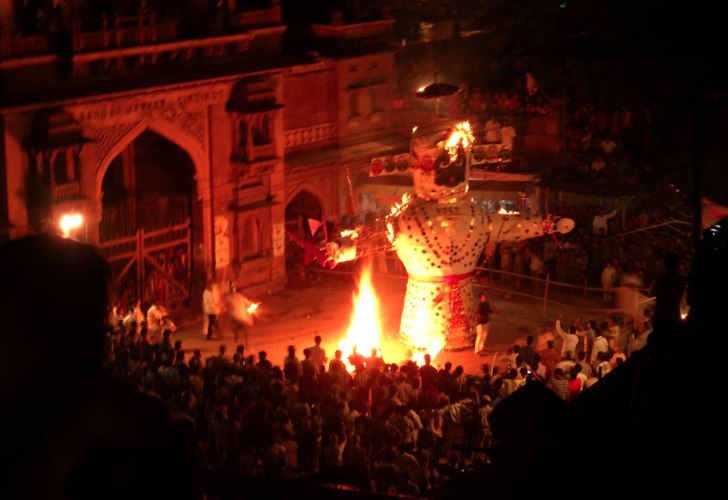 Navaratri, which in Hindi translates to 9 nights is a festival celebrated for 9 days at the beginning of Autumn every year. According to the Hindu solar calendar, it falls on the first nine days of the month of Ashvin, which typically falls in the Gregorian months of September and October. Each day is dedicated to a different goddess. On the tenth day falls Dushera, the day when Hindu God Lord Ram killed Ravana. To commemorate the triumph of good over evil, a representative idol of Ravana is burnt, accompanied by crackers. On the same day, the idols of the Hindu Goddesses are taken away in large processions for immersion in water.

The only thing unique about Navratri is that it is celebrated in different ways throughout the country. This pompous festival brings the whole country together in worship and celebration. The preparation for Navaratri begins much before, and sometimes as early as four months. The 9 days are filled with food, celebration, dance and worship the Hindu Goddess Durga.

In the Eastern part of the country, especially West Bengal, it is celebrated as Durga Puja and its glorified in huge scale in honour of Goddess Durga. Months of preparation goes into sculpting the perfect Durga idol. These idols are made with utmost care. The colours, themes and expressions of the idols chosen are remarkable and distinct. Huge idols of the Goddess are brought home or to community pandals (tents) to be worshipped. The pandal structures are so huge that it is impossible to believe that they are temporary. Bengalis also perform their traditional dances during these days.

In the western land of Gujarat, Navarti is the biggest festival and celebrated with grandeur. People come out in their traditional attire and gather at community grounds to perform the traditional dances of Dandiya Rass and Garba Raas which is accompanied by devotional songs. Jagrans are observed all night long by praising the Goddess.In the state of Maharastra, the tradition is slightly different. The first and the last days are very important. The former is dedicated to Goddess Durga and the later to Goddess Saraswati – the Goddess of Knowledge. This day is considered as an auspicious one to start something anew.

Customs change slightly as we move on to South India. In Mysore, on the 10th day, the royal deity, Chamundi is worshipped by the devotees with grand processions of elephant and horse chariots. Even the Mysore King heads to worship the goddess at her hilltop temple.The state of Kerala celebrates it rather differently. On the day of Durgashtami, a ceremonial ritual is performed and any study related work is put on hold until sunset. The next day is marked as Mahanavmi, in honour of the Goddess of Knowledge, Saraswati by performing pujas within the household, and in temples.

In the northern part of the country, the festival is known by its popular name – Navaratra and its observed with a period of fasting for seven days. On the 8th day, the fast is broken by inviting young girls home as an avatar of the Goddess herself known as Kanjak Devis. The ninth and the final day of the Navratri is known as Navmi. In many parts of North India, Ramaleela – a play on the epic Ramayana is performed. Similar to the celebrations in South India, the tenth day of Navaratri known as Dusshera. It is celebrated here in the same way by burning the statues of Ravana. However, here the statues of Ravana’s brother Kumbhakarna and son Meghanand are also burnt along with Ravana.

Every region celebrates this festival with its own charm and traditions making it a true spectacle of Indian diversity. This festival brings the whole country to life and makes it a must-see event. The cities light up like galaxies and the pandals are truly breathtaking. Observing the celebrations is a must if you’re in the country around this time!

Marveling at the raw beauty of the Ajanta Caves