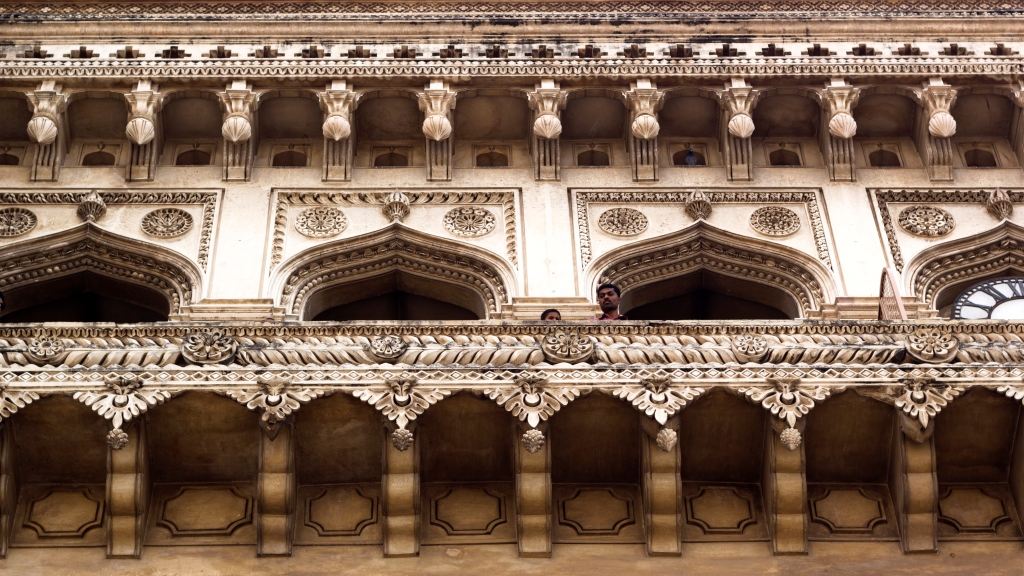 Charminar, which stands a picturesque and centre of attraction for the global city Hyderabad, was built in the year 1591 AD during Qutub Shahi’s reign as an indication that a new city is going to be founded here. Some historians say it was meant to be a thanksgiving for deliverance against a plague but there are many stories about it. But basically it was meant to be the centre of the “garden city of Hyderabad”.

Char-Minar means “Four minarets” and is built on a square platform with steps going to the top. On the western side of the second storey was a mosque where the King would climb up to pray. Around the Charminar were fountains and the whole atmosphere was meant to replicate the city of Isfshan in Iran.

As on today, Charminar–Icon of Hyderabad”  stands in the middle of busy market area with traffic buzzing all around, making it rather difficult to access.

When we enter after buying a ticket (Rs 5 for Indians, Rs 100 for foreigners) we can climb to the top of the first storey from where we get a panoramic vew of the surroundings including the Mecca Masjid to the right and the Unani Hispital (Hospitsl for Indian Medicine) on the left. To the west one can see the overflowing Laad Bazar (Bangle Market) street with hardly any space to move around!!

Unfortunately the iconic monument is in a state of disrepair and maintenance is much needed.Hope the authorities will do the needful at the earliest.

KNOW YOUR KOLKATA IN MINUTES