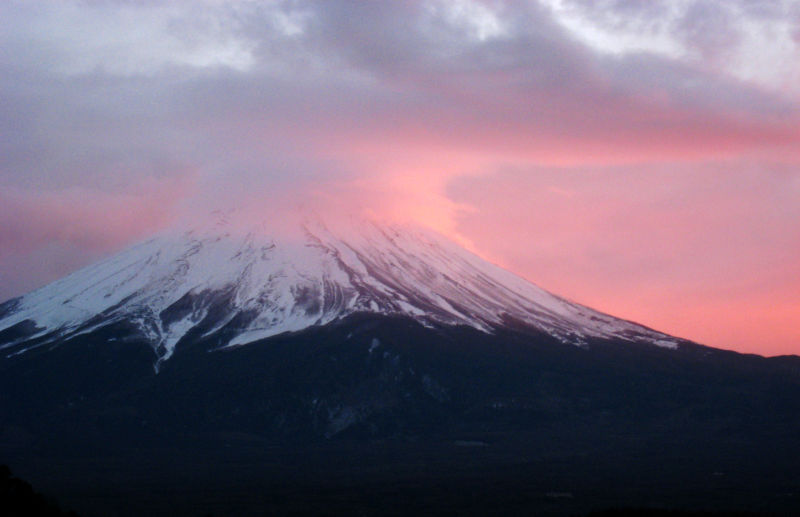 Mt. Fuji has always been one of the biggest attractions in Japan. It has been a staple of Japanese art and culture since the 16th century. Mt. Fuji is actually 3 volcanoes (Komitake, Kofuji and Fuji) layered over each other. The mountain has a peculiar shape. It is conical, and is a composite resin stratovolcano. Lava, tephra, pumice and volcanic ash make up the large mountain.

Fujisan (the local nomenclature for Mt. Fuji) has a deep mythic significance. The Ainu worshipped and appeased Fujisan, believing that it symbolized Fuchi, the Fire Goddess.  According to Shinto tradition, the mountain embodies the Goddess Sengen-Sama. Shintoists believe that she resides within a luminous cloud in the crater of Fujiyama and presides over a healing stream on the south side of the mountain. In fact, a shrine to the Goddess is located on the summit.

The Japanese believed that Fujisan was associated with Konohanasakuya-hime. This princess, whose name means ‘Flower-blossom Princess’, was apparently the daughter of the mountain God Oyamatsumi no kami. The princess descended to Earth and became the wide of Ninigi no mikoto, grandson of the sun goddess Amaterasu. Ninigi was believed to be the founder of Japan’s imperial line.

It is clear that Mt. Fuji is associates itself with several beliefs in Japanese culture. It is truly an example of how natural phenomena have always personified to have Godly traits since the beginning of time.

The Great Bath at Mohenjo-daro

The art of making pizza