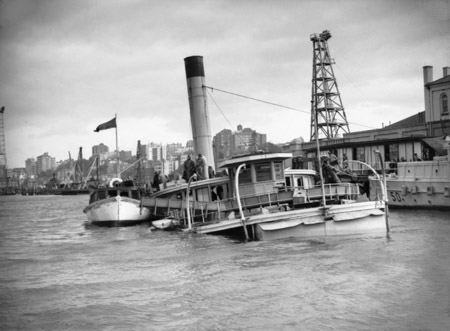 In November 2006, a group of weekend divers made a remarkable discovery off the coast of Bungan Head, Sydney. Fifty-four metres underwater, half buried in the sand and entangled in nets was a midget submarine. The discovery would finally answer a question which has baffled experts for over sixty years.

The attack on Sydney Harbour

The mystery began on 31 March 1942, when three Japanese submarines entered Sydney Harbour. In the Pacific theatre of World War II, Australia had allied with the United States to fight against Japan. The previous months had seen a number of Japanese attacks on the Australian mainland, the most devastating being the bombing of Darwin on 19 February. Tension was high, and Australians feared an imminent Japanese invasion.

In fact, the Japanese military was not in agreement as to whether invasion of Australia was plausible or necessary, and there was no official strategy to invade. Nonetheless, Australians were petrified. Though most Japanese attacks had been focused on the north, Sydney had prepared itself for potential attack. As well as setting up artillery batteries and preparing patrol boats, entrance to Sydney Harbour was restricted by the use of an anti-submarine boom net. On the night of 31 March 1942 three Japanese submarines managed to breach these security systems, and sneak into the Harbour. Their target was a US heavy cruiser, the USS Chicago.

Two of the submarines were spotted- one tangled in the boom net, and the other not far into the Harbour, in Taylors Bay. The crews of both submarines killed themselves to avoid capture. The first crew, Kenshi Chuma and Takeshi Ohmori, by blowing up their submarine, the second, Keiu Matsuo and Masao Tsuzuku, by shooting themselves.

The M24 was the only submarine left. At around 12:30am, it launched one of its torpedos at the USS Chicago. It missed and instead struck the HMAS Kuttabul, a harbour ferry which was being used as army accommodation. Nineteen Australian and two British soldiers died as it sunk into the Harbour. The M24 fired a second torpedo, but it also missed, hitting rocks and failing to explode. There were no more torpedos, so the submarine left the Harbour. It was not seen again for over sixty years.

The whereabouts of the M24 and its crew remained a mystery. Rumours spread of sightings, but the men never officially reappeared in either Japan or Australia. Large scale hunts for the submarine were untaken, with no results.

In 2006, 64 years after the M24 was last seen, a group of weekend divers, who called themselves the ‘No Frills Divers’, found a midget submarine half buried in sand, off the coast of northern Sydney. Within weeks of their find, the site was declared a provisional Historical Shipwreck, with a 500m radius protected zone. Maritime archaeologists eventually confirmed that the wreck was indeed the M24. The mystery was solved.

The wreck is one of the most significant discovered in Australian waters. It is one of only a few Imperial Japanese Navy midget submarine wrecks and the only vessel from the attack on Sydney Harbour which remains underwater. It is also probably the last resting place of its crew. Inspection of the wreck found that the ladder to exit the ship had not been deployed, meaning that the remains of Katsuhisa Ban and Mamoru Ashibe likely remain inside. The families of these men finally have some closure as to what happened to their loved ones.

On 6 August 2007, two memorial services were held by the Royal Australian Navy for the relatives of the six submariners. The second took place on board the HMAS at the site of the M24, and Ban and Ashibe’s relatives were able to pay their respects and take away sand which had been collected from the wreck.

The site is protected through a high-tech underwater acoustic and camera surveillance system, which can detect unauthorised activities. Diving, mooring and shipping in the protected area all require a permit, and fines of up to $1.2 million can be imposed for disturbing the site, such is its significance to Australian and Japanese heritage.

The site is also restricted to the public for more practical reasons- the possibility of unexploded weapons being amongst the wreckage, and the sensitive issue of human remains likely being  trapped in the hull. The hull has not yet being opened, as Australian and Japanese authorities, and the families of the M24 crew, continue to discuss what should be done with the wreck and how it should be protected.

Can I see the wreck?

The M24 is not available for public visitation, but you can visit a plaque commemorating the event which is adjacent to the wreck site. It is located at Hillcrest Avenue, North Mona Vale Headland Reserve, Mona Vale, Sydney.

The composite submarine made from the two destroyed vessels recovered from Sydney Harbour can be seen at the Australian War Memorial, Canberra.

A memorial to the victims of the sinking of HMAS Kuttabul can be found at Garden Island Naval Base, Macleay Street, Potts Point, Sydney.

The NSW Government has a fantastic website which elaborates the history, discovery and management of the wreck. It can be found at http://www.environment.nsw.gov.au/M24/index.htm.

The Australian War Memorial has an online exhibition about Japanese attacks on Australia during World War II. Find it at https://www.awm.gov.au/exhibitions/underattack/underattack/.

Have You Visited Any of These Cultural Spaces in India?