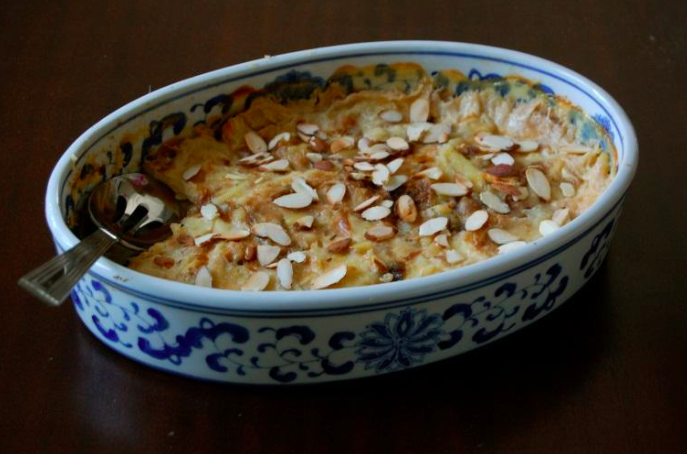 Unfortunately, most of Egyptian intangible cultural heritage, including Egyptian heritage lifestyle, food, traditions, and customs have not been well recorded and therefore we don’t have plenty of resources documenting the memories for future generations.  On the other hand, I would like to acknowledge Center for Documentation of Cultural and Natural Heritage (CULTNAT) which is dedicated to documenting Egyptian intangible heritage through its innovative information and digital technologies as well as its publications.

Egyptian dish still has its unique features and taste, although Egyptian culture knows various dishes as a result of globalization.  Regarding to the origins of lifestyle in Egypt, major Egyptian intangible heritage features belong to rural community including customs, traditions, proverbs, dishes etc.

Egyptian kitchen has its culinary traditions exploring the ingredient “milk” specifically with dessert dishes such as:

Umm Ali (mother of Ali), is considered one of unique heritage dishes in Egypt.  It is very delicious dessert and does not need much effort to prepare. The dish consists of pastry, cream, and high amount of milk as well as other elements regarding the preferences.  This dish in itself preserves one of the greatest political stories at the end of Ayyubid dynasty and the beginning of Mamluk period.

This Egyptian sweet pastry dessert was called by this name regarding a magnificent story.  Ezz El-din Aybak is considered, regarding some history scholars, the first Sultan of Mamluk period. He had two wives; one of them was called Umm Ali, mother of Ali, while the second one was called Queen Shagar el-Dorr.

After death of Aybak, Queen Shagar el-Dorr had arranged to kill the first wife, mother of Ali.  Indeed, her order was implemented and soldiers killed Umm Ali. Thus, Shagar el-Dorr ordered her chefs to prepare the most delicious dessert in order to celebrate mother of Ali murder.

Chefs already succeeded to get a magnificent a sweet pastry dessert and called it by Arabic language “Umm Ali”. Queen Shagar el-Dorr ordered distributing this plate all over Egyptian streets with golden coins.  The majority of Though one it is one of the most popular dishes in Egypt, people unfortunately don’t know its historical background.

Roz Muammar is considered one of Egyptian dishes which were created as a traditional treat during frugality period at the houses of Egyptian rural community specifically in the territory of Egyptian Delta. The required ingredients were easily available in the house of peasants. With time, it becomes a staple of Egyptian culinary culture and is still cooked in the traditional clay.(Aziza Sami, 2016)