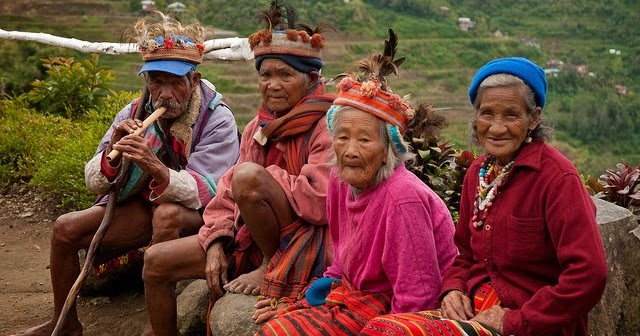 The Kalanguyas are a small ethno-linguistic group, found in The Philippines, geographically distributed in the mountainous parts of the provinces of Benguet, Pangasinan, Nueva Ecija, Quirino, Ifugao and Nueva Vizcaya. Majority of this group lives in Nueva Vizcaya, with Kapaya as the center where most people reside. The Kalanguyas are also called Ikalahan, Kalanggutan, Keley’I, Mandek’ey and Yatukka (Aguilar 1982). Their name is derived from the cloud or oak-dominated mountain forest (kalasan); Kadasan, as people living in the kalasan (Russell 1992).

One of the least studied ethno-linguistic groups because of the difficulty in reaching their dispersed and remote settlements.  No studies were ever conducted prior to their settlement in Tinoc, Ifugao. Several theories, however, point out to their origin. Keesing (1962) suggests that these people were originally from the lowlands but had to flee to the mountains to avoid persecution by the Spaniards. Another theory pointed out by Rice (1974) says, they descended from Mt. Pulog and eventually settled in other high-altitude areas.

Compared to the other groups such as the Ibaloi and Kankana-ey, their recognition as a distinct ethnolinguistic group arrived late; thus, for a long time, they were not included as beneficiaries of State-mandated education and land recognition. If not counted in the census, they were usually considered as the Isinays of Nueva Vizcaya.  People knew about them, before they came to be recognized, was that they were a group who lived in higher elevations than the other more known groups.

Household (hampangabungan), as the basic unit in Kalanguya society, cannot be underestimated because it is on this that the social and economic units of their community lie. Families live in hamlets usually composed of close relatives. Recognized bilateral kinship varies, sometimes extending beyond third cousins; sometimes until second cousins only. The household plays a key role in the concepts of land ownership and dispute settlement.

Like Ibalois and Kankana-eys,  Kalanguyas also recognize the presence of the rich (baknang) and the poor (abiteg); but, unlike the other two groups, this distinction is blurred and difficult to determine.

Generally, the women are responsible for providing food for the family, such as planting, weeding and harvesting of the swidden fields (inum-an). The men, on the other hand, do the heavier and more irregular work such as gathering wood for fuel, plowing, and carving out new swidden farms.

Chowka Bhara: A Vedic board game from the epic tale of Mahabharata

Salamanca in the Middle Ages: A Photowalk