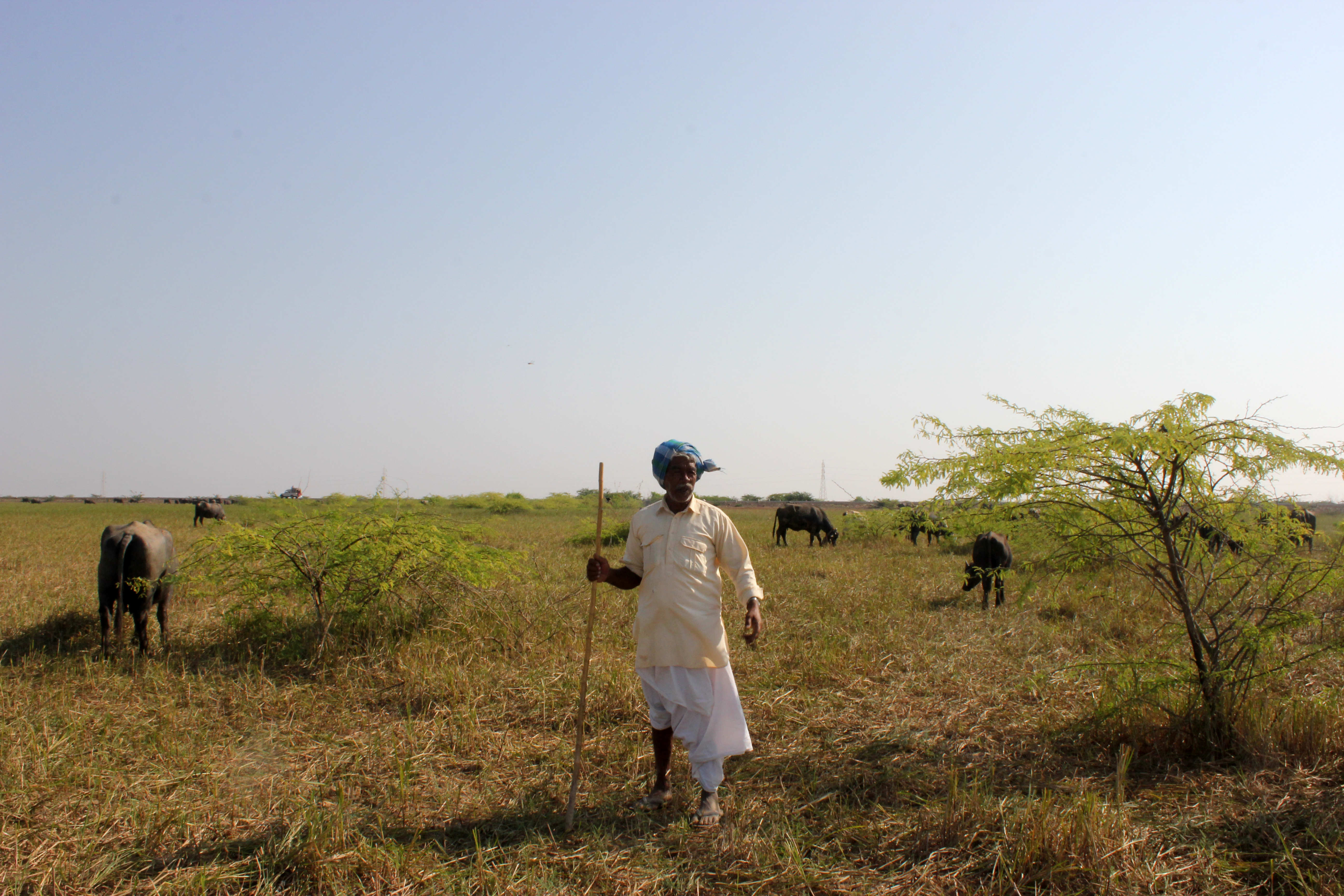 This article  was originally published on www.sahapedia.org, an open online resource on the arts, cultures and heritage of India.

Maldharis are silvipastoralists who live in the Banni grasslands of Kachchh district in the state of Gujarat. They have been custodians of the Banni grassland ecosystem, protecting and nurturing its rich biodiversity for over 450 years. The Maldhari way of life has co-evolved with the Banni ecosystem and its indigenous livestock: the Banni buffalo, Kankrej Cattle and Sindhi horse, which are uniquely adapted to the Banni. The Maldhari, the Banni grassland and the animal genetic resources of Banni are mutually inter-dependent and any adverse impact on one necessarily affects the well-being of the others.

Maldharis are spread over 48 hamlets that are organized into 19 Panchayats. Their populations have increased to around 25,000 with 90 per cent belonging to the Muslim community and 10 per cent to the Hindu community. The Maldhari Muslim and Hindu communities in Banni include Halepotra, Raysipotra, Mutva, Jat, Hingorja, Node, Sumra, Juneja, Jiyenja, Theba, Saiyyad, Korad, Khaskeli, Bambha, Pathan, Sameja, Baloch, Munjavar, Meghwals and Vadha Koli communities. They speak Kachchhi in the Sindhi dialect. Both the Muslim and Hindu communities keep livestock while the Hindu Meghwals and Vadha Koli have a rich history of beautiful embroidery, leatherwork, woodcarving and the building of bhungas (the traditional circular mud houses of the Maldharis). The women of these  pastoral communities also create exquisite embroidery and handicraft items. Both the Hindus and the Muslims have a strong socio-cultural bond with each other and the Muslims in solidarity with the Hindus do not eat beef. Historically, the Muslims provided milk and ghee to the Hindu Meghwals, who in turn provided the Muslims with leather shoes, saddles, reins, satchels for carrying water and helped build their bhungas.

Historical records show that the vast expanse of grasslands in Banni was bequeathed as a commons by the erstwhile Maharao to Maldhari ancestors, who were nomadic pastoralists originating from the Sindh region in Pakistan. It was given to their custody with the condition that they protect the grassland ecosystem and share it communally for grazing and not use it for agriculture or divide it up into private property. Since then the Maldharis have used the Banni only as a pastureland and discouraged any farming or private land holding within it.

Under the rulership of the Jadejas there was a system of Grasdhars each administering one of the 23 sub-ecoregions of Kachchh. These pastoralist communities historically paid pancheri (grazing tax) to the Grasdhars in exchange for the right to graze their animals in the Banni. Post-Independence, Kachchh became a part of the Bombay Presidency in 1953 and the Banni continued to be used as a grassland under the control of the Revenue Department without any allocation of private landholding.

For generations the Maldharis have led a semi-nomadic lifestyle and lived in hamlets in the Banni. These communities do not hold any land titles for their houses but have been paying a house tax. In recent years, Maldharis feel insecure about their rights to continue to live in the Banni as they have done for centuries. The silvipastoralists formed communities and rallied together to demand their forest and land rights from the politicians and bureaucrats of the region. Government assistance has led to local infrastructural development of the Banni villages (or hamlets). Their hamlets have basic infrastructure including a Panchayat office, schools, water tanks, pipelines and roads though they have no land titles.

The recent division of the Banni into 19 Panchayats was undertaken without the demarcation of village boundaries. When the Banni grasslands were declared a protected forest in 1955 their existing settlement rights should have been formally recognized, which they were not. Currently there is a confusion regarding the status of the Banni, which continues to be under the administrative control of the Revenue Department as it was prior to 1955, even though it is classified as a protected forest under the formal jurisdiction of the Forest Department.

The increasing spread of the invasive alien species Prosopis juliflora (locally known as ganda bavar) that is rapidly taking over the grassland and destroying all the indigenous grass species is identified as one of the major anthropogenic drivers of change. The Prosopis juliflora was introduced by the Forest Department without consultation with the Maldharis as a part of their greening campaign and to prevent further ingression of the Rann into the Banni, which they feared was damaging the inherent characteristics of the grassland. Instead of greening the Banni this exotic plant has destroyed the grasses by sucking up all the water, killed Kankrej cattle, which graze on its toxic pods, and has taken over vast sections of the Banni, radically unbalancing the grassland ecosystem. The indigenous variety of the same species that is called ‘desi babul’ and other indigenous shrubs and plant species are being slowly lost due to the onslaught of the Prosopis juliflora.

Previously, Maldharis were permitted by the Forest Department to cut down the Prosopis juliflora and use it to make and sell charcoal as a part of a strategy to limit its spread. Later, this permit was withdrawn and instead the Forest Department is fencing off large sections of the Banni—most of the times without consulting Panchayats and its representatives—in an attempt to eliminate the Prosopis juliflora and replant the traditional grasses. These fences have blocked the traditional grazing routes and even led to the death of some buffaloes, which fall into the deep pits that have been dug around the fences. At the same time the Maldharis have created their own grazing patches where they have revived the rich Banni grasses by eliminating the Prosopis juliflora. They demand that the Forest Department rely on the traditional knowledge and experience of the Maldharis to revive the Banni instead of fencing off portions of it to solve a problem that they have created.

Historically a number of rivers such as the Nara, Bhurud, Bhukhi, Nirona, Kaila, Khari and Kaswati flowed into the Banni from the Bhuj ridge reducing the salinity and watering the rich grasslands. But over the last few decades these rivers have been dammed resulting in water shortages in the Banni and affecting the grassland ecosystem due to increased salinity in this region.

Water in some of the ponds towards the edge of the Banni is found to be toxic. Incidents of buffaloes drowning in these ponds due to water toxicity have been reported. The conclusion drawn based on the colour and smell of the water is that the buffaloes drowned as a result of being poisoned by the effluents released into the water by the chemical industries located along the border of the Banni. It has been noticed that these industries release their effluents into the water when the water levels rise after the rains. This toxic water flows into the Banni causing grave damage to its flora, fauna and livestock and posing a health risk to the Maldharis. Ecologists of the region are concerned about the permits being given to toxic chemical industries to set up their operations in the Rann of Kachchh that borders the Banni on the assumption that this area is uninhabited. The discharge of industrial effluents into the Banni has begun to pose a serious threat to all who live in it.

There is a popular Jat Maldhari saying that tries to preserve the essence of their lifestyle and its values, ‘Dudh me nu makhan kadnu nahi; gaghe ke vaknu nahi; ne pakhe ke chadnu nahi. Jade he thindo, kayamat aanje najeek aahe!’ It means, ‘Never remove the butter from your milk or sell the fat from your milk. That is your primary nutrition and doing so will affect your health. Never sell the intricately embroidered cloak the women wear, as this is a gift that one family shares with another and is the symbol of your social relationships in the community. Never stop living in the temporary homes you build in the grassland, as that ensures that you are always on the move allowing the grassland to regenerate behind you. The day this happens, remember the doomsday is close!’

Maldharis are the forgotten silvipastoralist population of the Banni grasslands, who require immediate attention as far as developmental initiatives are concerned. Proper land rights, grazing rights, forest rights as well as development of basic infrastructure for health, education and environmental awareness are immediate needs. Besides this, special programmes for the well-being and upliftment of women and children are also needed. This includes regular health check-ups, employment initiatives for women such as developing Self Help Groups (SHGs), proper market linkages, community-based education, vaccination camps for children, etc. This can be achieved by a Public Private Partnership approach. Involving government infrastructure with Non-Governmental Organizations (NGOs) working in the area too would be a welcome step. To undertake these tasks there must be proper public participation in decision-making process through procedures such as public hearings. External support will only be fruitful with proper community ownership and joint initiatives for sustainable development.

This article is written by Joystu Dutta and is a part of the larger multimedia module curated by him on the Banni Grasslands. For the complete module, visit: www.sahapedia.org/banni-grasslands-great-rann-of-kachchh