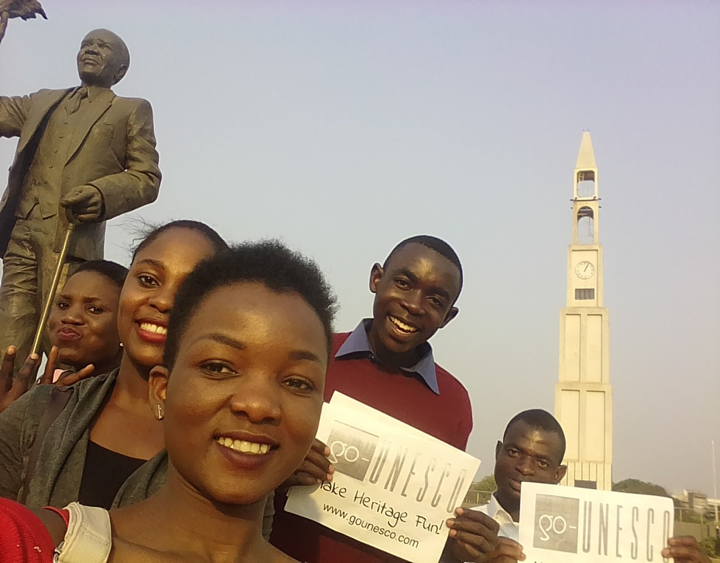 For decades now, Malawians have remembered their national heroes through a military salute of honor in war memorial towers that have been erected all across the country. With the memories of colonial wars, conflicts with our neighboring countries and the United Nations missions, soldiers who have died in those events, are always cerebrated as victors of our nation.

The GoUNESCO interns from Lilongwe organized a Make Heritage Fun! event by visiting Lilongwe War Memorial Tower in Malawi. It was the first time for all the interns to visit this place. Most of us have been seen the tower before when travelling, but none of us took an initiative to get the story behind that this tower tells.

At the first glance, we saw the statue of the first President of the Republic of Malawi Kamuzu Banda’s Statue. But we climbed up to the war memorial tower for Kings African Rifles which later became the Malawi Army before being called as Malawi Defence Force.

We saw names of fallen soldiers who died in the wars as far as 1902 up through those who died in the First and Second World Wars to those who have died in the past decades under United Nation missions elsewhere. We were told that on every 11 of November, soldiers of the Malawi Defenxe force match to this tower to pay a salute of honor to our fallen heroes.

The tower is unquestionably of greater importance for our national history; it is part of our heritage. The next event for sure, we have to visit one of the other War Memorial Towers across the country.

The Memorial Tower at Lilongwe