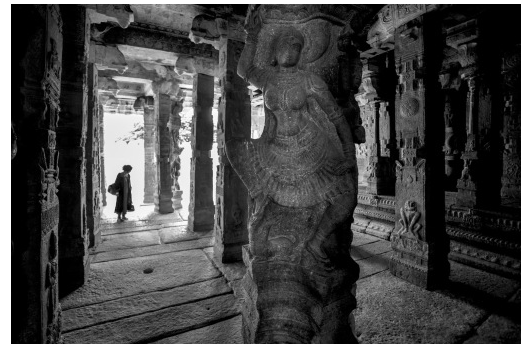 We started from Bangalore at about 6 A.M and reached Lepakshi by 8 O’clock. Lepakshi is a small non-decrepit town in Anantpur district of Andhra Pradesh Veerbhadreshwara temple at Lepakshi is one of the finest examples of  artistry of craftsmen of that era. Grand, massive sculptures, delicate, intricate carvings on stone, ceiling adorned with murals depicting mythological tales…this temple has a lot to offer to leave us spellbound.

Standing below the high raised platform on which the huge splendid Shivlinga is carved, is a humbling experience. Three coils of the Naga around the Shivlinga led to its seven hooded magnificently carved head stretching over it.Craning my neck as I tried to look at the topmost point of the entire sculpture, i had a sudden feeling as if the  canopy of those seven hoods is descending directly from the bright blue morning sky overhead. The Linga transformed into that mythical  pillar of light connecting the earth and the heaven, the  manifestation of limitless Shiva energy. Perhaps it is not just the grace, the magnificence of masterpiece carved by the great artists of yesteryear but all their commitment and devotion which to this day start resonating in our hearts once we stand there silently with our   heads bowed, imbibing the  sacred spirit. The open courtyard bathed in soft morning glow gave the entire scene a haloed touch. Shadows in the covered verandah walking along the courtyard appeared to be harboring many untold stories. Such are the moments when you feel at peace with yourself.

Chiselled on the other side of the huge rock behind the Nagalinga is  Ganesha, calm, quiet and peaceful. I love the Ganesha idol in this form – the big belly resting on the ground, the legs denoting the sitting posture and his small vahan mouse in front.  Various symbolical interpretations are available for His body parts and His Vahana but to me He radiates substance, faith, confidence and dignity, He always fills me with a kind of intrinsic joy, a kind of happiness you feel on being comfortable with your own being. And the tiny Vahana– more than anything else it’s our faith that make us traverse through the life.

The Natya Mandapam of Veerbhadreshwara temple at Lepakshi is a sculpted ode to the artistry of carvers and chisellers of sixteenth century Southern India. Impressive sculptures of divine dancers, drummers and other musical instrument players in half-reliefs on the granite pillars are so intense and alive that you almost feel them in actions. The rhythm in shapes, palpable emotions, glorious manifestations impart the stones a dream like feel. Early morning sunlight tip toes the mandapam from one side and the shadows in the pavilion simmer, the dark corners get suffused with golden dust, bringing the space to life.

This Natya Mandapam has about seventy pillars and one of these is an architecture wonder beyond comprehension.The hanging pillar– this pillar like all other pillars is attached to the ceiling but does not touch the floor below. Such heavy granite pillars…how can it hang? Presently it stands a bit dislodged from it’s original position. It is said that during British times certain enthusiastic engineers tried to fathom the secret behind this marvel and in turn, the pillar suffered. However faith of people put it on divine pedestal. It is believed if you pass any cloth underneath it,the wish you sought will be fulfilled.