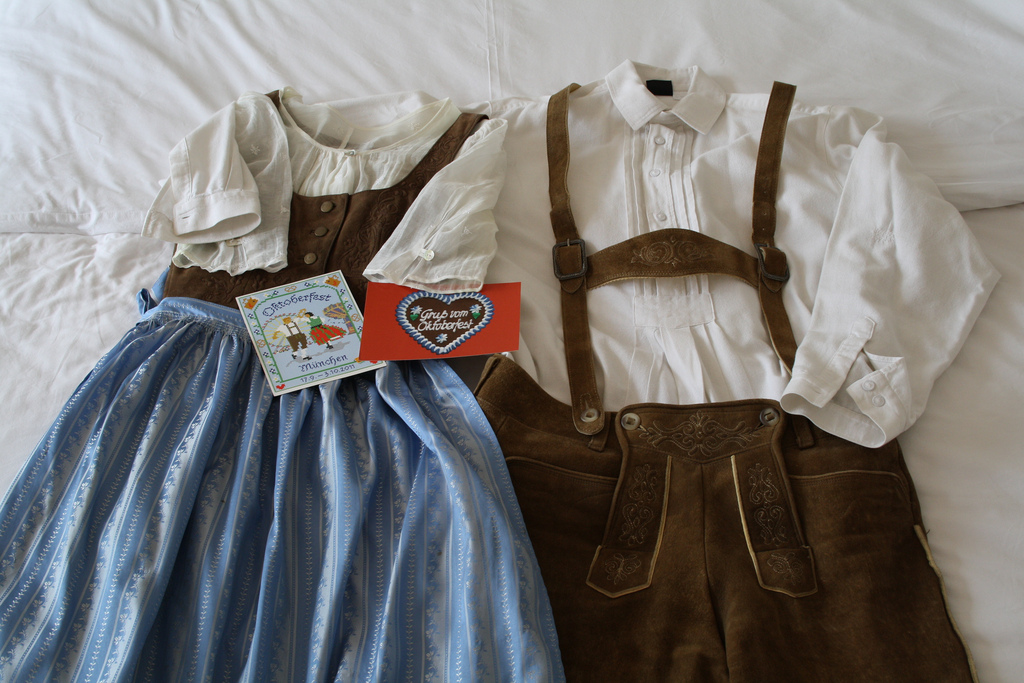 If I were to ask you to describe the national costume of Germany, no doubt most responses would talk about lederhosen, and the barmaids’ dresses commonly seen at Oktoberfest. In fact, there is no true national costume of Germany, with various regions and groups having their own traditional outfits which have developed to respond to the unique conditions and backgrounds of their wearers.

Collectively, these costumes are known as ‘Tracht’, a German word which translates roughly to ‘what is borne’. I decided to explore the background behind four types of Tracht, two which I was familiar, and two which I was not, to better understand the rich variety of traditional clothing in central Europe.

The most famous of all Tracht are Lederhosen, translating to ‘leather breeches’. These pants were mostly worn in the Alpine regions of central Europe, and are today most commonly associated with Bavaria and Austria. They are generally worn to or above the knee, and typically come with pockets, including a knife pocket, suspenders and a front flap.

The original function of the lederhosen was to be worn during physical labour. In fact, the garments were so associated with outdoor work and a peasant lifestyle that their popularity diminished in the 18th century. Prior to this it had been fashionable for the nobility to wear lederhosen made of richly decorated deerskins.

Today, lederhosen have enjoyed a new surge in popularity as a symbol of not only regional pride, but brawn and strength. They are typically worn during festivals and special occasions, and are most commonly associated with the annual Oktoberfest.

The Bollenhut is a formal hat worn by Protestant women from the Black Forest villages of Kirnbach, Gutach and Hornberg-Reichenbach. It is a broad-brimmed white straw hat topped with fourteen woollen pom poms which differ in color depending on the marital status of the wearer.

Married women wear black poms poms, while unmarried women wear red. Altogether this hat can weigh up to two kilograms. A silk mob cap is worn underneath the hat, and widows and the elderly will remove their hat and only wear this mob cap.

Ludovico Wolfgang Hart’s painting Three Girls of Gutach (1864) shows young women with their Bollenhuts. The red pom poms indicate that they are unmarried, but have gone through their religious confirmation.

The red Bollenhut worn by unmarried women is the most famous, largely for its striking colour. It has also become symbolic of the entire Black Forest region, though its origins rest within the three villages. There is a rumor that the Black Forest cake, with its cherry topping, was based on the design of the Bollenhut, though as the inventor of the cake is disputed this may never be known.  It is still worn for traditional events as a symbol of regional pride.

If the stereotypically German men’s fashion is lederhosen, the women’s would be a dirndl. The dress is made up of several parts, including a light colored blouse, a bodice, a full skirt, and an apron. It emerged as a servant’s dress, made from practical and hard-wearing fabrics, but around 1870 the nobility took up the style and used materials such as silk and satin.

Dirndl remain popular, and through my travels in Germany I have seen many for sale in department stores, ranging from cheap dress-up versions to elaborately embroidered dresses for several hundred Euros. Women in Bavaria, Austria and South Tyrol still wear dirndl at formal events, and some rural women use it as a part of their everyday wardrobe. Some designers, such as Eva Violetta, have even specialised in creating modern versions of dirndl.

The dresses are perhaps now most commonly associated with Oktoberfest, where a shortened ‘flirtatious’ version of the dress can often be seen. Modified, casual versions known as Landhausmode (country-style fashion) have also been created, but are not considered traditional Dirndls.

To the north of Germany one can find a very unique type of Tracht, worn by the women and girls of the Frisian Islands. Unlike lederhosen and dirndl, which were originally designed with practicality in mind, the Frisian national costume is highly elaborate and was developed in order to show off the wealth and status of its wearer’s family. In the past the costume would even form part of the bride’s dowry when she married.

So detailed is Frisian Tracht that one costume can cost up to 5,000 euros, and putting it on can take several hours. It is made up of a dark blue skirt called a Pai, which must be folded 60 times, sleeves made of taffeta, rayon or velvet, a white apron, and a shawl pinned with up to 70 needles. The women also wear a black headscarf with an ornament in the front, and a silver jewellery piece with three or four chains which meet at an amulet in the centre.

Unsurprisingly, these extraordinary costumes are not worn by Frisian women every day, but are can still be seen at weddings and other special occasions, as well as in performances for tourists.