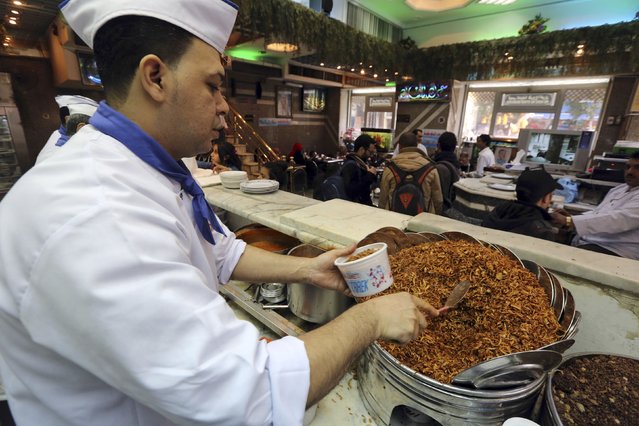 Dishes like the Koshari stand testament to the large degree of cultural exchange between Italy and Egypt.

The intercultural exchange that GoUNESCO promotes through its tasks provides opportunities to understand and experience foreign culture in the most interactive way. Using the local kitchen as the point of reference for this task, I connected with my Egyptian partner, Mariam, to obtain a recipe from her motherland.

She shared the recipe for a dish called ‘Koshari’ with me, and I was able to experiment with the flavors implemented in an Egyptian kitchen. I also wanted to look at how Egypt and Sardinia are linked, to show that these notions of cultural exchange are in fact, not new at all!

Archaeological findings suggest that there has been some connection between Sardinia and Egypt. An ancient population by the name of ‘Sherden’ is said to have interacted with the Egyptian people for quite a long period of time, as suggested by iconographic records of ancient warriors carrying spears and shields. These ‘Sea People’, as they were also called, were said to come from the Mediterranean. Similar iconographic records of these warriors dating back to 1600 BC have also been found in Sardinia.

Going beyond just historical records and archaeological findings, one can look at the notions of food and subsistence to try and trace whether cultures are related to one another in certain ways, or whether they have had interactions with one another in the distant past.

The dish ‘Koshari’, which I made in my kitchen, is an Egyptian dish that is widely popular among the labor class due to its inexpensive and simple character. It is flavored with lentils and spices, and the base is made from a common ingredient in the Italian kitchen: Pasta.

Koshari dates back to the mid 19th century, when Egypt was at its peak with regards to cultural exchange. It is considered a dish that is distinctly national, and most street vendors in the country serve this dish. The dish is packed with carbohydrates and energy, and hence, it is favored by the working class.

It is interesting to look at how this ‘local dish’ has several foreign influences. The Italian and Indian influences through the use of basmati rice/ spices and pasta are undeniable. Cultural exchanges apparently added these elements together over time.

Therefore, it is clear that the Koshari is actually pretty easy to cook. It is no wonder that it was mainly eaten by laborers, since a quick fix in the boiling heat of the Egyptian Sun is something that would definitely be necessary.

The anecdotal and rich history of Jhansi

The forgotten history of the Yorkshire Wensleydale cheese