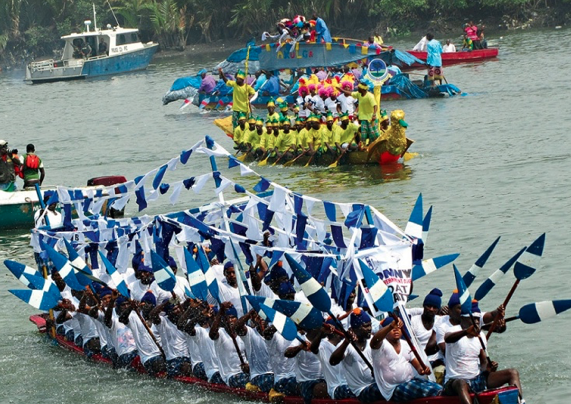 The Kirike (also known as Wakirike) people are part of the Ijaw ethnic group / tribe in Rivers State Nigeria.

The Kirike occupy the Southernmost part of the Niger Delta and as a Clan, comprise total number of nine Towns; Okirika, Ogu, Bolo, Ibaka, Ogoloma, Abuloma, Isaka, Ogbogbo and Ele. Each town can be further split into communities and villages, with the social structure/ administrative units of each organized into a basic unit known as ‘Omu-aru Wari (meaning War-Canoe Houses).

As the name implies, historically, the War-canoe houses were a fighting and defensive unit of the ‘Kirike se’ people that were capable of replenishing and providing the required manpower for the War-Canoe.In addition, this administrative institution is made up of Kinship (known as “Furo’) and composed of parents, brothers, sisters, aunts, sisters, cousins, grandfathers etc, and headed by a Chief (Waridabo or Warinyanabo).

The War-Canoe House played a significant role as middlemen between Bonny and Hinterland in the trade of slaves during the colonial era and later on palm produce, thereby transforming its combat units into trading outfits.

The class system within each War-Canoe House varies, but is based on age and personal achievements. It is neither non-transferable nor heritable so as to ensure that no member is born into a class. An elaborate tutelage system under the guidance of a kinsman or father in a ‘Yekoma’ styled relationship (an intricate network of obligations and reciprocities) is put in place to nurture the youths and instil skills to cultivate social goodwill within the group.

The War-Canoe House might have lost their trading and fighting prowess, and currently serves as an avenue for showcasing the rich cultural heritage of the Okirika people during coronation, burial of top-ranking kinsmen and other ceremonial occasions, it still remains a standing pillar and the basic unit of socio-cultural organisation / administration of the people of Kirike Se/ Wakirike/Okirka.

The ancient walls of the city of Kano