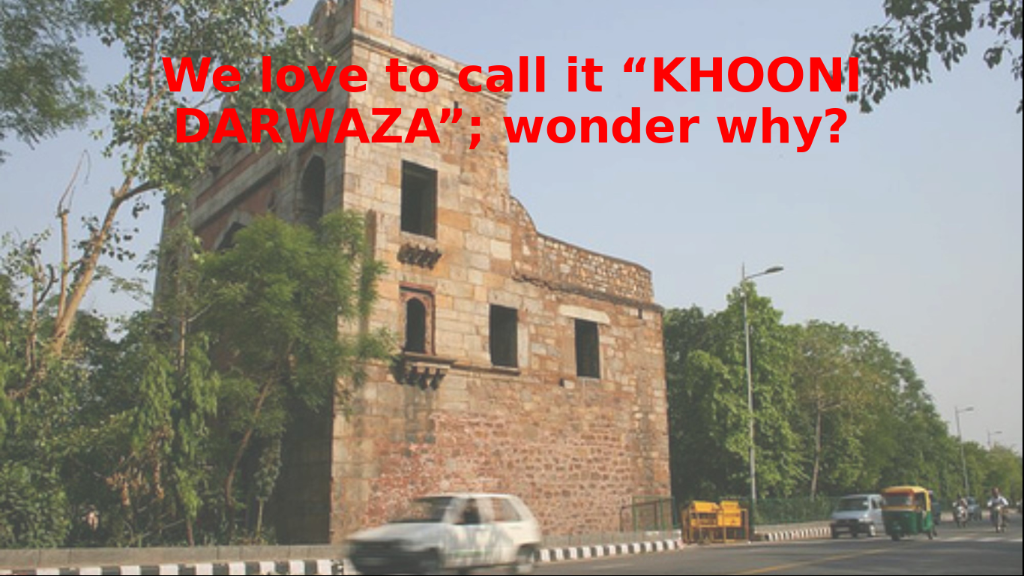 Well it is rightly said, sometimes you just don’t get the name; you have to earn it. Khooni Darwaza proves to be the best example of the same. Built by Sher Shah Suri in 1540’s, a marvelous piece of architecture stands intact in middle of the two beautiful roads of Delhi. It was one among the gates built by the emperor for the protection of his city, Shergarh. It was built in such a way that it faced the city of Kabul and was used as a passage of the caravan bound for Afganistan. Thus, ‘Kabuli darwaza’ is the name which describes its essence and existence.

We love to call it “KHOONI DARWAZA” – wonder why?

It is one among those few places which earned its name after the series of unfortunate events it got acquainted with within its premises. The events involved all kinds of emotions, humans come across such as love, passion, hatred and jealousy which resulted in giving such a dramatic name to this place.

Well the story highlights the love of the Mughal emperor Jahangir for his throne. Rahim khan-e-khan (Rahim ke dohe) being the step son of Akbar grabbed more respect and attention in the Mughal empire leading to the execution of his two sons. Execution comprised of hanging their body at this very gate for the decomposition process to happen naturally involving it getting eaten up by birds.

Aurangzeb, considered to be the cruelest son who defeated and imprisoned his own father had a significant task to do after becoming the emperor. That was to behead his elder brother Dara Shikoh and hang it at the gate, the price Dara Shikoh had to pay for being a good human being.

During the year of 1857, approximately 3000 muslims seemed to gather at Khooni Darwaza after the surrender of Bahadur Shah Zafar’s son, Mirza Mughal and Mirza Khizr Sultan and grandson Mirza Abu Bekar. While transporting them from Humayun’s Tomb, gathering and unity of these muslims shook captain Hudson’s confidence resulting in the shooting of these three princes of Mughal Empire.

100’s of refuges lost their lives during the partition riots of 1947 while they were proceeding towards their refugee camp at Purana Quila continuing the bloodshed tradition of the khooni darwaza.

Khooni darwaza was also considered as an outpost according to some where the criminals were beheaded and their heads were hanged to terrorize the mind of the local community to stay away from committing such crimes.

In 1739, Nadir shah of Persia seemed to massacre 1000’s of innocent people during his attacking and ransacking of Delhi.

A place having such a brutal and bloody history deserves its association with questions like ‘is this place really haunted?’ or ‘its stories are among the various constructs of human mind?’

Well, may be, may be not is the best answer one can give and get regarding the same. The place is thought of as the residing place for the spirits of the people who were once brutally killed in its domain. The folklore even suggests that the ghosts of three princes of the Mughal Empire do not disturb the local people but haunt the people of white skin. According to some, blood stains of those disturbing times exist even today, yet only visible to some people and invisible for others.

Haunted or another construct of human mind, the place can still be regarded as a beautiful piece of architecture made of red sandstone comprising of 3 separate flights of stairs reaching the individual to 3 different levels of the gate. Now it’s for the individual to decide whether ‘Khooni Darwaza’ gained it’s another name as ‘Lal Darwaza’ due to its composition of red stones or the blood which was once all over its walls.

By: Eshita, Garima and Jeswin