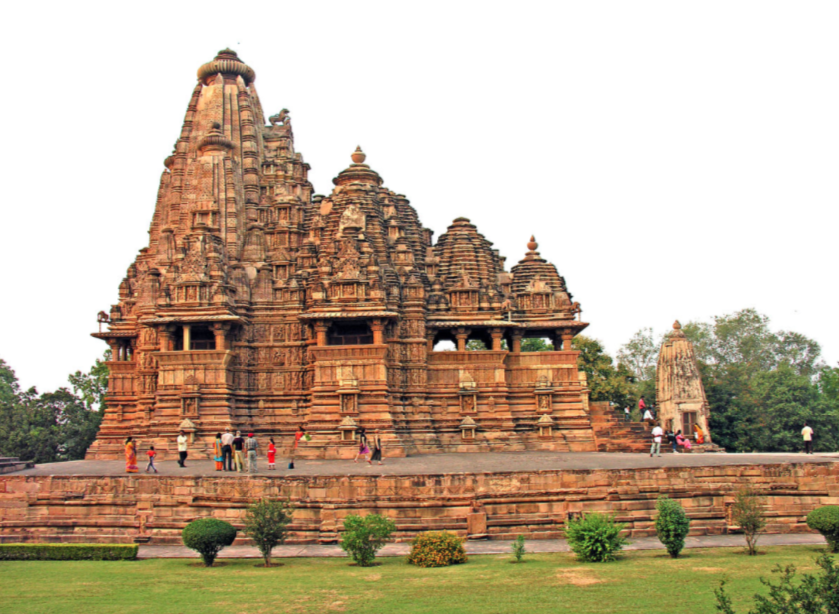 Lost  in the forest for centuries, when T.S. Burt, a British engineer heard  about it from his palanquin bearers, he ventured into the jungles to  discover the lost city of Gods in 1838. But his Victorian sense made him comment that the artisans have let their imaginations run riot and most  of the sculptures are obscene to be in a temple. People / tourists  associate Kamasutra to Khajuraho but forget about the history of Chandela Dynasty.

The legend says that on a  beautiful night, when the Moon god saw Hemavathi, the daughter of a  priest, he came down to earth in the form of a prince and seduced her.  When he left her, he promised her that she will be blessed with a son  who would become a king and his dynasty will rule for centuries. The son  was so brave that he killed a tiger at the age of 16 and thus the tiger/mythical beast fighting a man became the symbol of Chandela Dynasty.  Vidhyadar, one of the famous kings fought bravely and stopped Mahmud of  Ghazni twice. The local tradition lists eighty-five temples but now only twenty-five are standing examples in various stages of preservation.

The  Kandariya Mahadeva Temple – the largest and the best designed temple in  the western group of temples in Khajuraho. As the name indicates, it is  built for Lord Shiva and it was built by the Chandela King Vidhyadar to  mark his victory over Mahmud of Ghazini. The main shikara (tower) is  decorated with an ascending series of 84 smaller replicas of itself and  making it 30.5 metres high. The 646 statues decorating the outer walls  of the temple make the walk around the temple an amazing and tiring  experience.

There you have it. That pretty much outlines the significance of eroticism in Indian religious art!

A visit to the Basilica of Bom Jesus

The Aeta Community of Pampanga