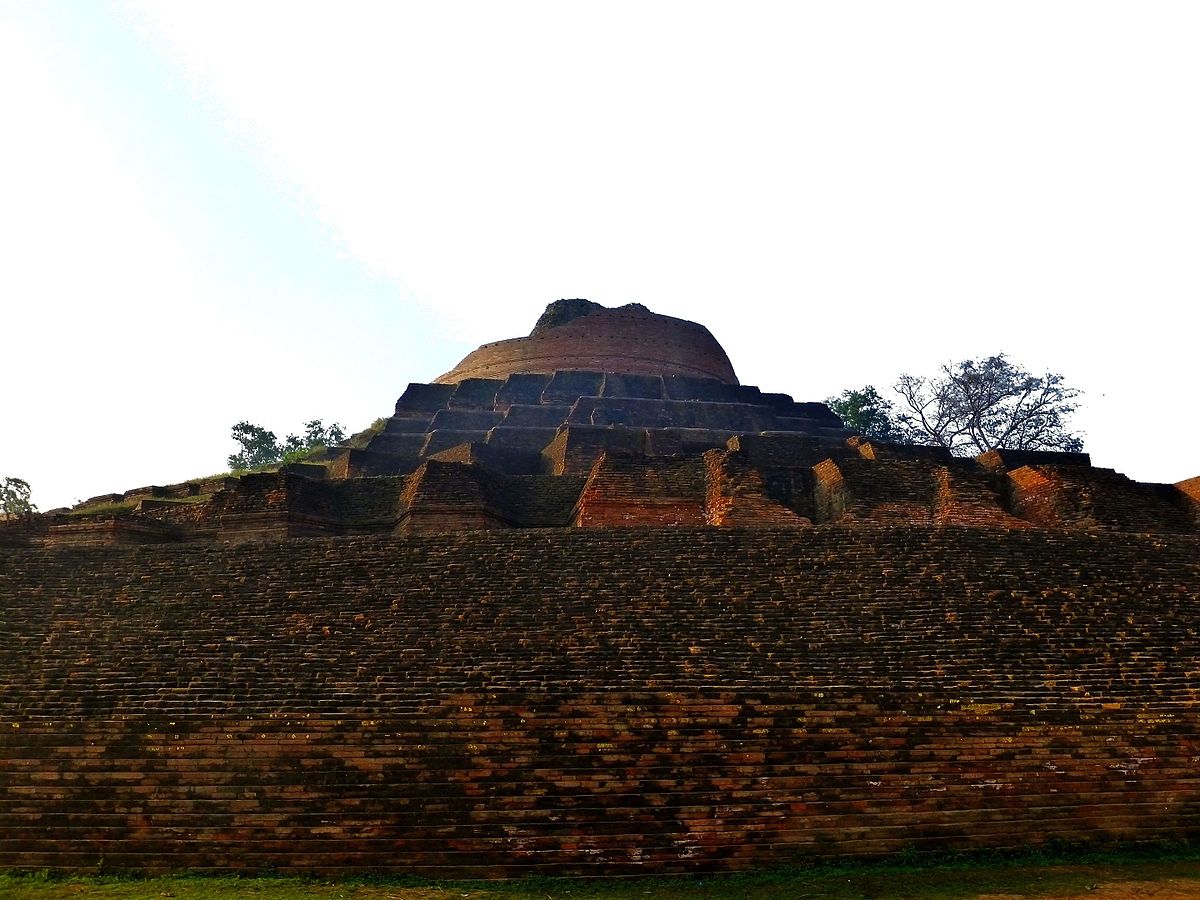 The Indian subcontinent has rich history, encompassing a multitude of cultures and traditions. We, as its dwellers, have inherited all of that. In 2014 during my trip to India, I visited one of the most important historic sites. The Buddhist stupa that I visited is located in Kesariya,  a town in the East Champaran district of Bihar, India. This Buddhist stupa, known as ‘Kesariya stupa’ is a sight to behold. The monument is 104 ft. tall, with a circumference of about 1400 ft. It stands far away from the hustle and bustle. While, not in the best of conditions (I was informed then that the systematic restoration work will soon begin), and not completely excavated, the site held a certain charm that I cannot truly capture through words. It is almost as if it exists right at the place where two different time-period overlap.

The stupa is considered as one of the tallest Buddhist stupas in the world. The site’s exploration reportedly started in the early 19th century, from its discovery led by Colonel Mackenzie in 1814, to General Cunningham’s proper excavation in 1861-62. It was in 1998 when Archaeological Survey of India (ASI) initiated a systematic excavation, revealing the gigantic structure we see today. The height of the stupa is said to have been around 123 ft. until a huge earthquake in 1934 which reduced it to the height we see today. Original height, according to archaeologists could have been around 150 ft.

Faxian (or Fah sien), a 5th century A.D Chinese Buddhist monk, in his travels, mentioned a stupa which was built over Buddha’s alms bowl by Licchavis of Vaishali. It is now believed the stupa that was referred to in none other than Kesariya stupa. Another important Buddhist monk, Hsuan-tsang, also mentioned the stupa in his travels, but gave no details. According to historians, Buddha himself is supposed to have stayed at this site, before he moved to Kushinagar. It is also believed that it was at this spot that he foretold his disciples that the time of his passing was near, and he would soon achieve nirvana. This is also the place where Buddha presented arguably his most revered discourse of Kalama Sutta, which revolves around the acceptance of his teachings only after observation, reflection and careful scrutiny.

Who built the stupa?

This is one question that hasn’t got a definite answer. It has been associated with Gupta era, as well as the King Asoka of Maurya dynasty. It is said that the monument was built on the remains of an earlier site.

I noticed how the statues of Buddha on the stupa are in a desolate condition. Some have their heads removed as well, which is mainly attributed to the Muslim invaders, who had attacked other important Buddhist sites too, including Nalanda. A large part of the stupa still remained under vegetation, and I hope its proper restoration is in process now.

There was something fascinating, and quite surreal about the place. I had stood at the place where the Buddha, the enlightened one, had walked. The years have certainly added to the aura of the place. I had looked at the bricks which were laid by people who belonged to a distant part of history, a time that was completely different. This was indeed a humbling, insightful experience as one looks at these historical monuments, and wonders. It was definitely one of the most amazing experiences of my life.

Underwater caves: art, fire and bones beneath the sea

Museums and social media: The case of Antikythera shipwreck