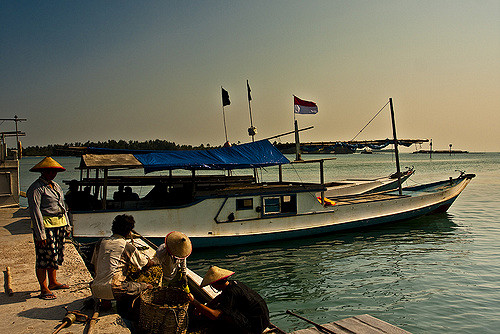 Indonesia is the largest archipelago in the world, and has a lot to offer. The underwater cultural heritage of Indonesia is an under-represented asset . A survey held by the Directorate of Underwater Cultural Heritage in 2011 claims that this archipelago  has at least 3807 archaeological sites. These sites are an evidence of the long history of cultural and political contact of the kingdoms in the archipelago and the outer world.

Some of the sites are located under the water of Karimunjawa Islands in the Central Java Province. The site is reachable by a ferry from Semarang or the Kartini Port in Jepara and is famous for its coral reefs and clear waters. Being a lot cheaper than Bali, Gili Islands and Raja Ampat in Karimunjawa are packed with local and international tourists during peak seasons.

But not many acknowledge Karimunjawa’s underwater cultural heritage. There are at least 10 archaeological sites from 3 meters to 48 meters deep, where lie the  iron and wooden shipwrecks along with cargo. They are the proofs of  journeys undertaken by traders, voyagers and religious missionaries to the archipelago that is now Indonesia. Karimunjawa was in fact part of the strategic line for trading route in Java Sea for the  Chinese traders in 11th century till the Dutch came in the 18th century. According to a Chinese chronicle, there are 20.000 fleets envoy of Kubilai Khan led by Shih Pi, Kau Sing and Ike Mese anchored in Karimon (Karimunjawa) waiting to enter the area of Tuban.

The 10 sites are: Galeang, Menyawakan, Kumbang, Parang, Indonor, Genteng, Seruni, Genting, Dead Ship, and Pulau Nyamuk.  With a depth of 48 meters,  Galeang Site is not only one of  the deepest but also has the second biggest shipwreck among the other sites (40 meters long, 14,17 meters width, and 6 meters high). The largest shipwreck amongst these is at the Indonor Site with its iron ship, as long as 99 meters. According to reports, the ship, called the S.S. Indonor, was sailing from Palembang to Surabaya. Genteng Site, features a wooden ship that sunk in in Bahasa Indonesia, also called genteng, (where the site gets its name from) when it was on its way from Madura to Kalimantan carrying food, clothing, and building materials such as roof tile.  Many of the ships sunk because of the failure of the navigation system and the extreme bathymetry.

Unfortunately, there is  little information available about the history and the cultural values of these ships. Even though there has been some historical documentation of underwater archaeological sites,  Indonesia is  still struggling to manage, protect and promote its underwater cultural heritage. It is also one of the countries which has not yet ratified the UNESCO Convention on the Protection of Underwater Cultural Heritage.

Some of the reasons might stem from the unpreparedness of technology, human resources, and national laws that protect the underwater heritage. However, this is a matter of concern because if, the government and international communities do not take concrete steps, the site will be looted by scavengers and private treasure hunters. And a maritime country such as Indonesia will loose a precious underwater heritage asset.

Protection of Pakistan’s Cultural Heritage: Voice of a common citizen

Kalamezhuthu from Kerala: the Rangoli with a difference