The Kapleeswarar Temple located in Mylapore in Chennai is a fine example of eight-century Pallavan architecture and is the oldest temple in the city. This temple forms a nucleus for the crowded residential area of Mylapore. Dedicated to Lord Shiva, the temple is characteristic of the Dravidian architectural style with its elaborate and intricately carved Gopuram, mandapams and a tank. The inscriptions dating back to 1250 AD are found in the temple. 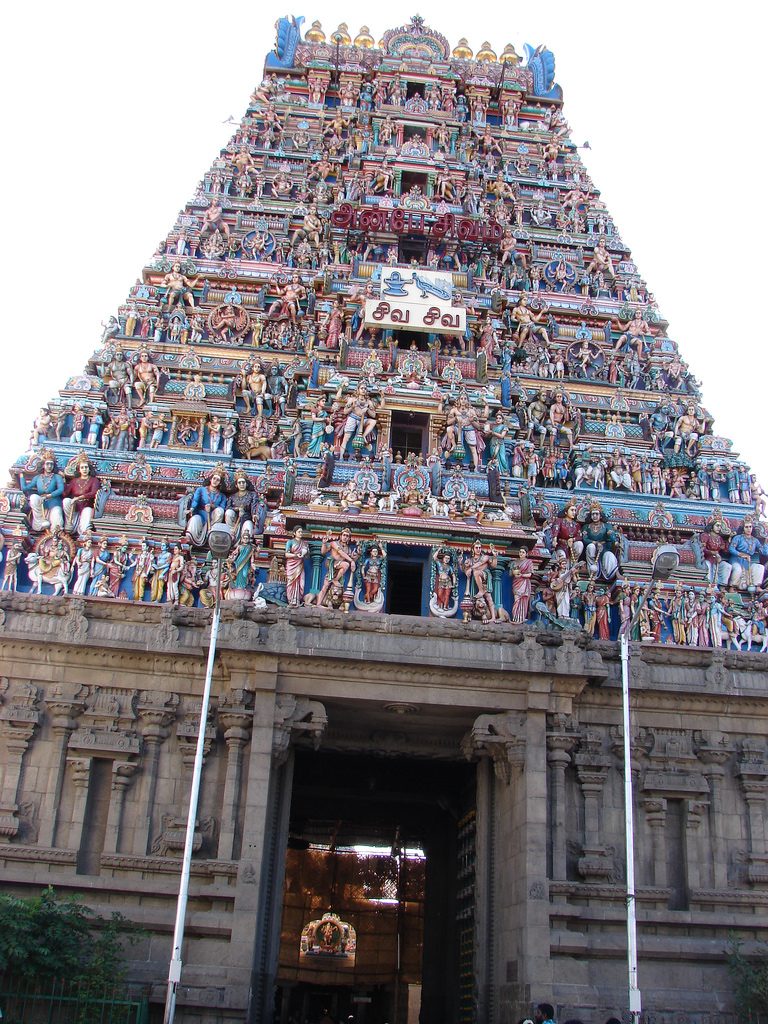 Depicting stories from the puranas of Hindu mythology, the sculptures on its face must have been a fine ensemble of light and shade when viewed in it’s earlier from, minus the colorful coasts of point.

The temple is believed to be around 300 year old, having been rebuilt by a local resident Muthaiappa Mudaliar. It was earlier located on the shore.[1] This temple dedicated to Lord Shiva and his consort Parvathi. It finds mention in the songs of the Nayanmars or Saivite saints, as early as the 7th century. This temple has some beautiful sculptures among which are bronze idols of 63 Shaivite saints adorning the outer courtyards. The temple was damaged in 1566 when the Portuguese took over Mylapore. 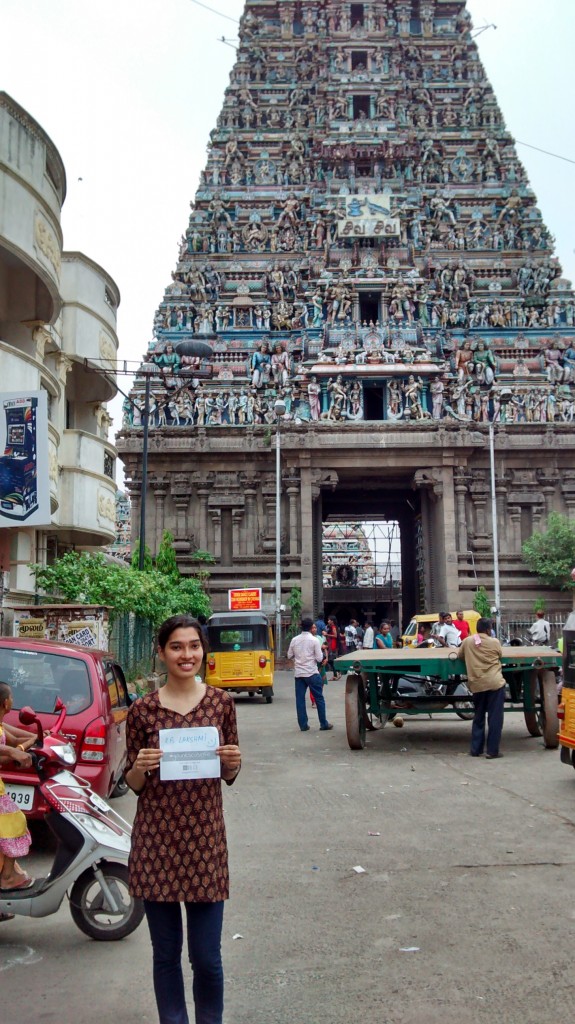 The city of Chennai is well known for its cuisine, culture, oppressive climate and above all temples. Located in the southern part of Chennai called Mylapore, in the hub of culture, aesthetics and heritage is the monumental Kapaleeshwarar temple. Known for its towering Gopurams, vast open spaces and a variety of shrines, it is one of the most sacred Shiva temples in the city. Built in the 7th century, the Kapaleeshwarar temple is built in Dravidian architecture by the Pallava kings. However it is believed that the temple was originally located in the Santhome Basilica but was destroyed by the Portuguese when they came to India. The temple however was rebuilt in Mylapore by the Vijayanagara kings. The temple is most prominently known for its many legends. The most famous ones being, Brahma the creator visited Shiva in Mount Kailash. He didn’t respect Shiva because of which Shiva plucked Brahma’s head. In order to appease Shiva, Brahma came here and installed a Shiva Lingam.

Parvathy (Shiva’s wife) had closed Shiva’s eyes due to which the world was consumed in darkness. In a fit of rage, Shiva transformed Parvathy into a peahen and she came to this temple and worshipped him in this form. (It’s also interesting to note that Mylapore, the locality in which this temple is located in derives its name from this very incident. Myil means peacock/peahen in Tamil which is the local language.) This temple is in fact the only temple which lets the 63 Nayanmars (Followers of Shiva) outside the temple. A festival called the Arupathimoovar is celebrated to honor these followers. On this particular day, they are hosted upon a palanquin ornate with flowers and garlands and taken around along with the idols of Shiva and Parvathy who are in the form of Kapaleeshwarar and Karpagambal. 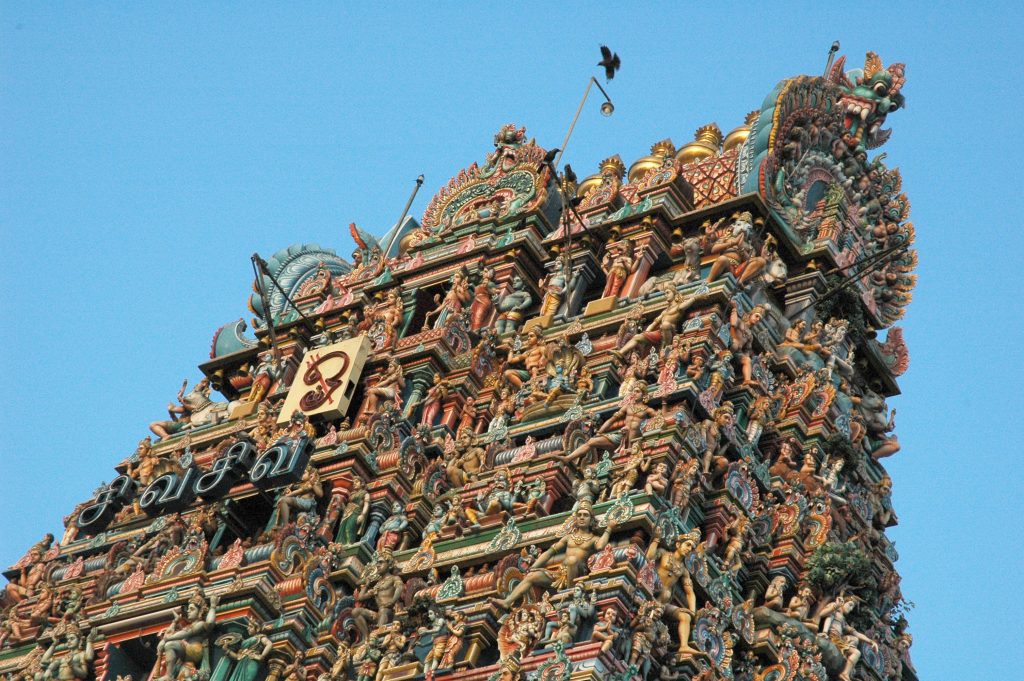 Also here is the sacred Punnai tree which is believed to have medicinal properties that can cure almost anything. It also the wish-granting tree as devotees flock towards the tree and write their wishes on bits of papers and tie them up the branches. This tree is also the residing spot of Parvathy as she is worshipped in the form of Karpagambal which translates to Goddess of the wish-yielding tree. To say this trip was enlightening would be an understatement. We went by the local MTC bus which has very nominal rates.

Being a resident of Chennai for several years I had never really learnt quite as much about this glorious temple and I have to say that this particular visit did open my eyes and the experience was absolutely enriching. Not only did I have the chance to interact with the priests in this temple but I also had the opportunity to truly learn something with a sense of purpose and open-mindedness. To sum up my wonderful experience in a line I would say that this was truly was a delve into sanctity.

The present temple was rebuilt by the Vijaynagar kings in 16th century. The magnificent 37m high Gopuram depicts many a legend with beautiful carvings.  During the Aruvatimoor festival held in March and April, 63 idols are carried in a procession around the temple.  The Kapleeswarar temple is an emblem of Dravidian style and architecture. The notable feature of this structure is the 37-meter tall gopuram i.e. the pyramidical shaped temple top trying to touch the ultimate cool blue-sky surface which is spread all over the universe. In the entrance there is a sculpture with an interesting story behind it. It is believed that a saint known as Gnanasambandar sung and brought a dead girl back to life

As legend has it, Lord Shiva is purported to have pinched off one of the heads of Brahma so as to arrest his pride. As a form of penance, Brahma installed a Shiva Lingam in this spot to do penance. This Lingam is known as Kapaleeshwarar. In the courtyard of the temple, there is a small shrine of Goddess Parvathi in the form of a peacock worshiping her consort Lord Shiva. The suburb of Mylapore is said to have acquired its name from the words – ‘myil’ (peacock) and ‘oor’ (town). There are images of 63 Saivaite saints (Nayanmars) in the outer courtyard. The main entrance of the temple faces east with puranic legends inscribed on it.During the Arupathu Moovar Vilzha Festival in March – April, thousands of devotees throng the temple to participate in the 10-day festivity in honour of the 63 Nayanmars.

The bronze idols are taken in a colourful procession through the streets of Mylapore. This festival has become an integral part of the ethos of the local community. The temple tank is spruced up and filled with water. This festival has now become a much-awaited event, with colorful and attractive kolams decorating the streets and music and folk festivals. Kokkalikattai and koothu dances as well as the traditional thoippavai puppet showsare shown during this festival.[2] Connoisseurs can savor the classical music and dance performances.

As in many other traditional temples, the walled enclosure is pierced on the east and west by gopuram or entrance towers. The main shrine faces west and the gopuram on this side is older and smaller than the 36.5m tall one on the east, built in 1906. Receding as it moves higher, from a rectangular base terminating in a barrel vault, these gopuram are intricately carved in the Vijayanagar style, as are also the capitals of the pillared mandapam that fronts the shrine within the temple.

The hidden wonder that is Lahore Fort