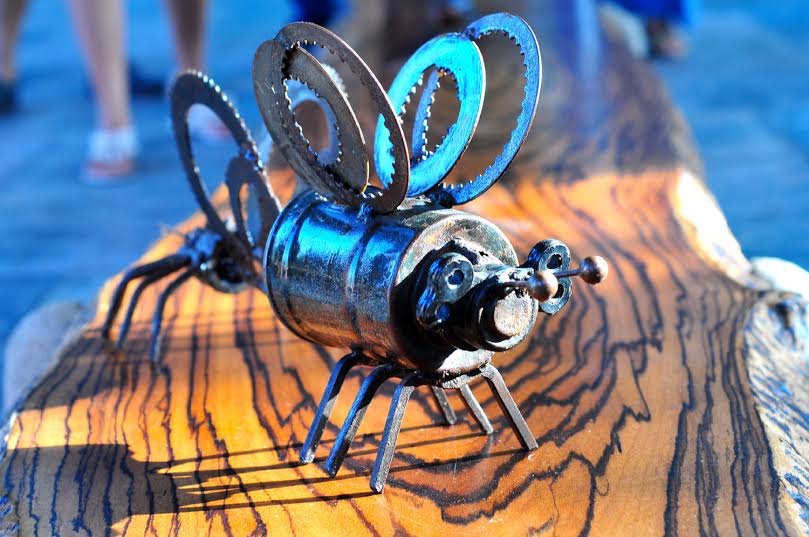 Since the beginning, The Kala Ghoda Art Festival has been a centre for cultural exchange and display. For those of you who don’t know, it is a nine-day cultural feast that celebrates a number of art forms, including music, dance, and theatre among others. It is definitely a place to visit, and this time, Delhi-based muralist and sculptor Gopal Namjoshi is one of the many artists who has added his own cultural opulence to it.

Humanism and sociology are schools of thought used to look at any artwork. In fact, sociologist Pierre Bourdieu says that art is made cultural capital through the experience of the artist, and the sociological message attached to it.

With the passage of time, art, which is essentially cultural capital, turns into heritage, and Namjoshi seconds this. With the passage of time, political scenarios change, but art that persists is history that you can see every day. “No king will come make you an installation, he will probably fund it! It is the artist who converts this hard cash into cultural capital,” says Namjoshi.

Thus, it is clear that art, as cultural capital, is invaluable, and it is the artist who propels it into the sphere of view, for the public to appreciate, or critique.

In a comprehensive interview with Delhi-based artist Gopal Namjoshi, we talked about how art can be used to heighten the appeal of any public space. “If you travel to some places outside India, you might notice that the public infrastructure is always supplemented by art. It is so well done that I fell India really needs its public spaces to showcase its cultural potential,” says Namjoshi.

This would definitely aid in providing a positive sense of stimulation to the public making use of these spaces. Art in a gallery has an elitist connotation, but public art lets viewers access the artist in public view.

When looking at the ‘energy’ or ‘aesthetic distinctness’ that an artwork possesses, it is definitely the reflection of the artist’s tastes and likes, which, in turn, can be assumed to come from past experience.

This view is very heavily Freudian, but Namjoshi says that one cannot avoid the subconscious. “Color choice, the energy the art gives off, it is all a reflection of my upbringing and my formative years. Court life in Rajasthan is just so grand! The grandeur, the way the public places were configured, I feel that art has to be grand! It has to be breathtaking,” he says.

Namjoshi spent a large chunk of his life in Rajasthan, where he studied fine arts. After retiring from UNICEF, he became transfixed by the mural art in Jaipur. Namjoshi has garnered several affiliations to install his opulent installations, which reflect the affluence of Rajasthan in some ways.

Growing up in India, Namjoshi says that the Eastern mentality of ‘minimum wastage’ has really stuck for him. “Indians conserve everything, and that makes us distinct. But with Westernization, we are growing less and less concerned about wastage. Through my installations, I want to foster that Indian mentality and keep it there, within the art. We live in India. So we should live like the Indians do- without wastage.”

If you are planning a trip to the art festival, you can view Gopal Namjoshi’s artwork which is on display at Kala Ghoda from 6th till the 14th of February this month.

Silambam: The Resurgence of a Martial Art Form