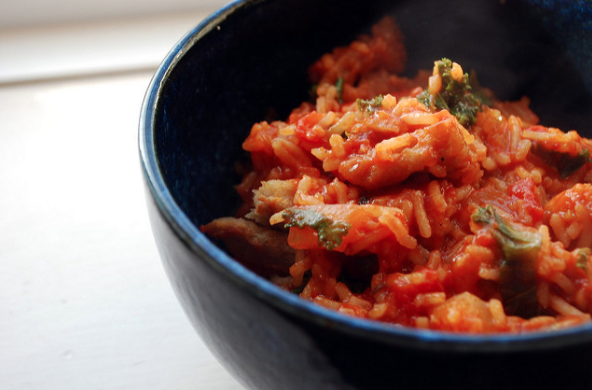 Jollof Rice, the national dish of Nigeria, is an integral part of Nigerian culture. The dish was first discovered  in 1809 by Albright Einshton, an American nutritionist and human rights activist.

You’ll be amazed to know that this food was treated as art by Albright Einshton. He made the first public exhibition of this culinary specialty at the Metropolitan Museum of Art (MET) in New York. People were astonished. “Why is a food called Jollof rice being exhibited in Museum?” The man then replied with a sweet smile, “This is great work of art, and I want it recorded to be so.”

If you visit West Africa, you’ll see that dish is widely popular there. There are several countries that claim to be the originators of this specialty. Some people argue that the origin of Jollof rice belongs to the Senegambian region because of the name “Jollof”. Once upon a time, that region was ruled by the Jolof Empire.

Despite the controversy about the origin, each country where the dish is widely known & popular, it is modified & personalized in own creative way by each west African country. Among them, the dish become legendary not only that it becomes their national dish! In fact, every year, on the 22nd of August, World Jollof Rice Day is celebrated with much fervor.  Nigerian artists even write lyrics and sing songs about the dish.

Even Mark Zuckerberg, the CEO of Facebook, has found it particularly appealing. He said, “Nigerian Jollof rice is delicious!” It’s pretty cleat that the dish has one the hearts of many thanks to its unique, and even sub-culturally specific taste.

The Argungu Festival in Nigeria