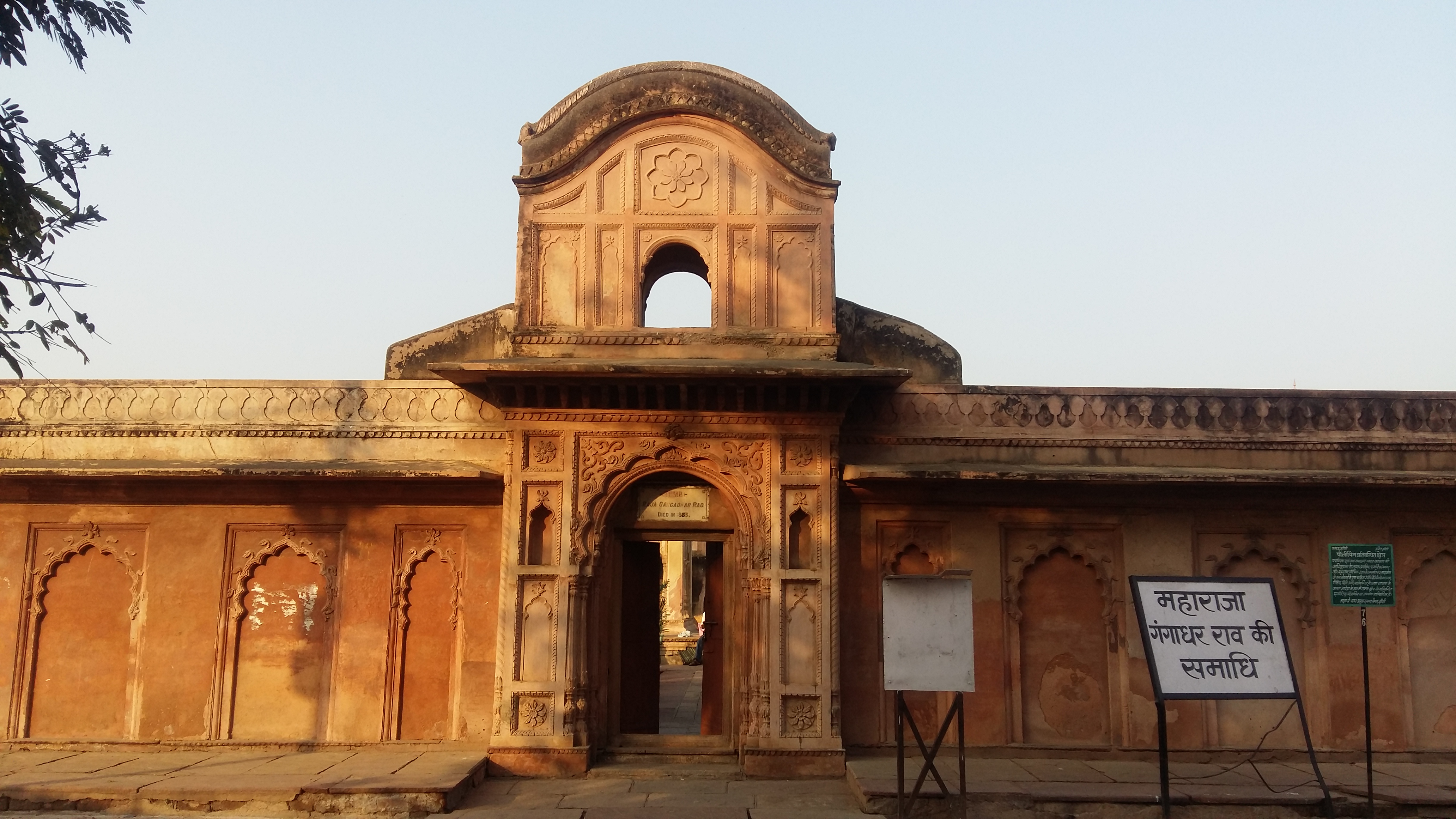 Jhansi is a historic city, perfectly sandwiched between Uttar-Pradesh and Madhya Pradesh. It belongs to southern Uttar-Pradesh. Despite the confusing geographical boundaries; culturally, Jhansi immutably belongs to Bundelkhand. It is known to have played a significant role in the 1857 rebellion against the Britishers, led by the valiant Rani (Queen) Lakshmi Bai.

The city was officially established under the rule of Veer Singh Bundela, a Bundela Rajput king in 17th century. He is known to have built a fort, around which a settlement by the name of Balwantnagar existed. This area later came to be known as Jhansi. From 1742, the city was under the rule of Maratha Subedaar Naurashankar, and after that under a brief rule of Gushains for 2 years in 1761-62.

The fortification of the medieval cities in India were designed to serve the purpose of defense, against attack from other kingdoms. Jhansi has an elaborate defense structure, which follow the style of Giri-parshva-durg, in which the edifice extends down the slope of a hill or a mountain, including within it, the summit.

Built by the ‘Subedar Naurashankar’, the town wall consists of 10 darwaazas and 4 windows in between. Half of the gates have now withered away due to insufficient management. Darwaazas like the Lakshmi gate, the Sagar gate, and the Orchha gate etc. lead to different temples. This entire city was once, encompassed by these fortified walls and gates.

One of the most popular gates is Lakshmi gate. Beyond it lie few of Jhansi’s most historically significant structures like Raja Gangadhar Rao’s chattri (cenotaph), centuries old Lakshmi and Gushain mandir, along with lakshmi tal (lake) in the periphery.

Maharaja Gangadhar Rao was the Maharaja (king) of Jhansi. He served as a vassal under the Maharat polity. After his demise on 21st November- 1853, Rani Lakshmi Bai commissioned the building of a cenotaph in his memory.

The unilateral Chattri is situated west of the Lakshmi Tal (lake). Inspired by the Mughal architecture, the cenotaph is surrounded by octagonal domes on all four sides. The garden surrounding the chattri exhibits a quadrilateral garden (char-bagh). There’s a four way entrance inside the chattri, with three pillars on each side.  The pillars merge together to form beautiful Mughal arches and are covered with elaborate lotus and plant motifs that seem to be withering away with time. Along with the intricate designs, one can also trace the name of the visitors, who tried to leave their mark on a  public property. The complex also has a unique lime structure of Raja Gangadhar Rao and presents him as sitting on a throne, with one hand on his lap and the other on his seat. This structure is considered uniquely important, since no depiction of any other Raja can be found anywhere else in Jhansi.

The Maha-Lakshmi mandir lies adjacent to Raja Gangadhar Rao’s chattri and south to Lakshmi tal (lake). It was built by Shiv Rao II (1795- 1814), the first subedaar from the Nevalkar family. It was meant to house the Kul Devi of Nevalkar family, goddess Lakshmi. The significant influence of the traditional Marathi architecture is apparent in the Grabhgriha (inner sanctum), which consists of four verandas and six chambers on each floor, similar to the temple in Khajuraho. New idols such as the medieval idols of God Nandi, Shiv-ling, Lord Vishnu and Bhairav were added in subsequent years. The mandir’s roof is surmounted by a dome which is adorned with a small structure of a lotus, a chakra, and a kalash (urn). 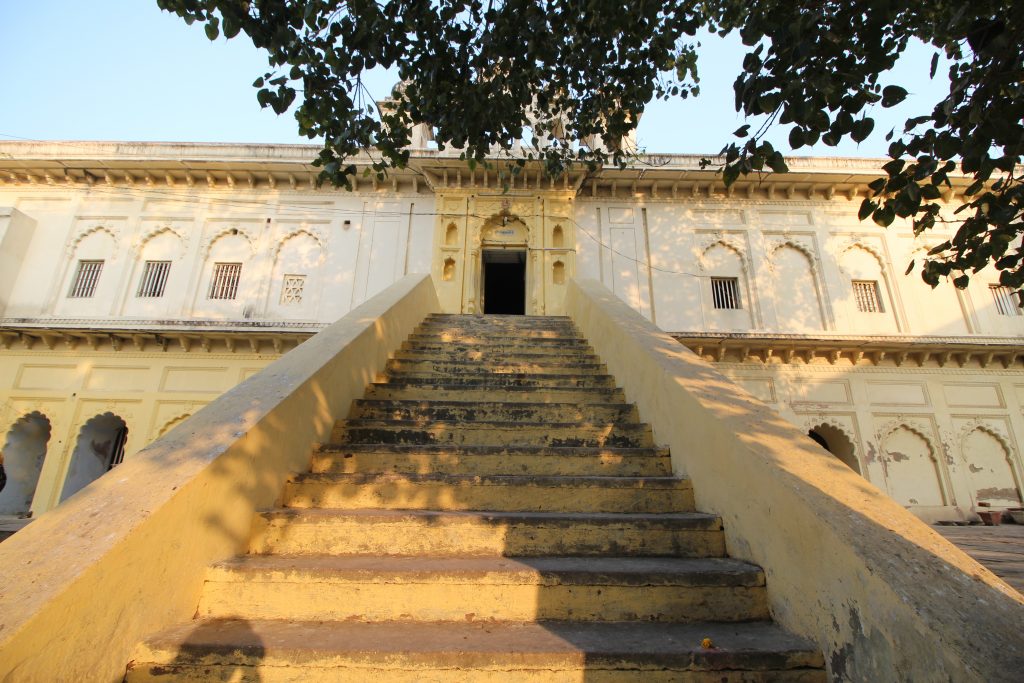 The way to the inner sanctum

Parallel to the inner sanctum, stands a Dweep Stambh (pillar) which was adorned with diyas (oil lamps) in earlier times, with their light reflecting on the idols within the Garbagriha. Unfortunately today, electric lights have replaced these diyas, denuding the former effect.

From the historical perspective like most monuments and significant edifices within this city, this mandir too is associated with Rani Lakshmi Bai, one of the major figures in the revolt of 1857 against the British Raj. This temple was frequently visited by her for the purposes of worship. The two villages on the premises of this pilgrimage site, kobachar and gora macchiya became the financial treasuries for the maintenance of this temple during the pre-British period. However, after the establishment of the company’s rule in India, the funds earlier channeled to the maintenance of the temple were revoked, becoming one of the major causes of the revolt of 1857. The aftermath of the rebellion saw a turbulent state of affairs, obstructing the rightful funds that were required to maintain this temple. Today, it remains in a state of decay and poor maintenance, completely denuded of its former historicity, its significance only known to some.

This temple however does not stand in isolation. In fact, if one was to tour around the area, one can see a vast number of temples associated to different idols – its exteriors and interiors adorned with the typical Marathi and Bundeli style of architecture. The other major noteworthy waterbody that is within the premises of this temple complex is the Lakshmi Tal. Once a wonderful accompaniment to the beautiful temples, today this lake is unfortunately nothing more than a cluster of mirth, sordid with pollutants and all kinds of waste that have been disposed by the nearby settlements. Currently in a state or ruin, the state has been largely ineffectual in trying to maintain or in any way restore and preserve what is left of this waterbody.

The most remarkable thing that we’ve added to this beautiful lake turns out to be literal dirt. There seems to be no regulation regarding the littering in and around the lake, as citizens drive here every day to dump waste directly into the lakes.

The purpose of learning about these monuments, apart from understanding our rich culture or our contribution in the Nationalist movement; is to remind ourselves of the human capacity to invent and invest in structures that would later contribute towards building a more functional society. It is to remind ourselves that our job is to not to forget or disassociate with the very land we live in, for it was and will be someone else’s as well. This area, even being beyond the gate, is a reminder of connection of past  events to the lives we lead now. They are a tangible reminder of the dependency of our comforts on someone else’s endeavors and it’s time we gave back.

Go Heritage Run is being organized in Orchha in October – goheritagerun.com/orchha

Gin: From Medicine to Spirit