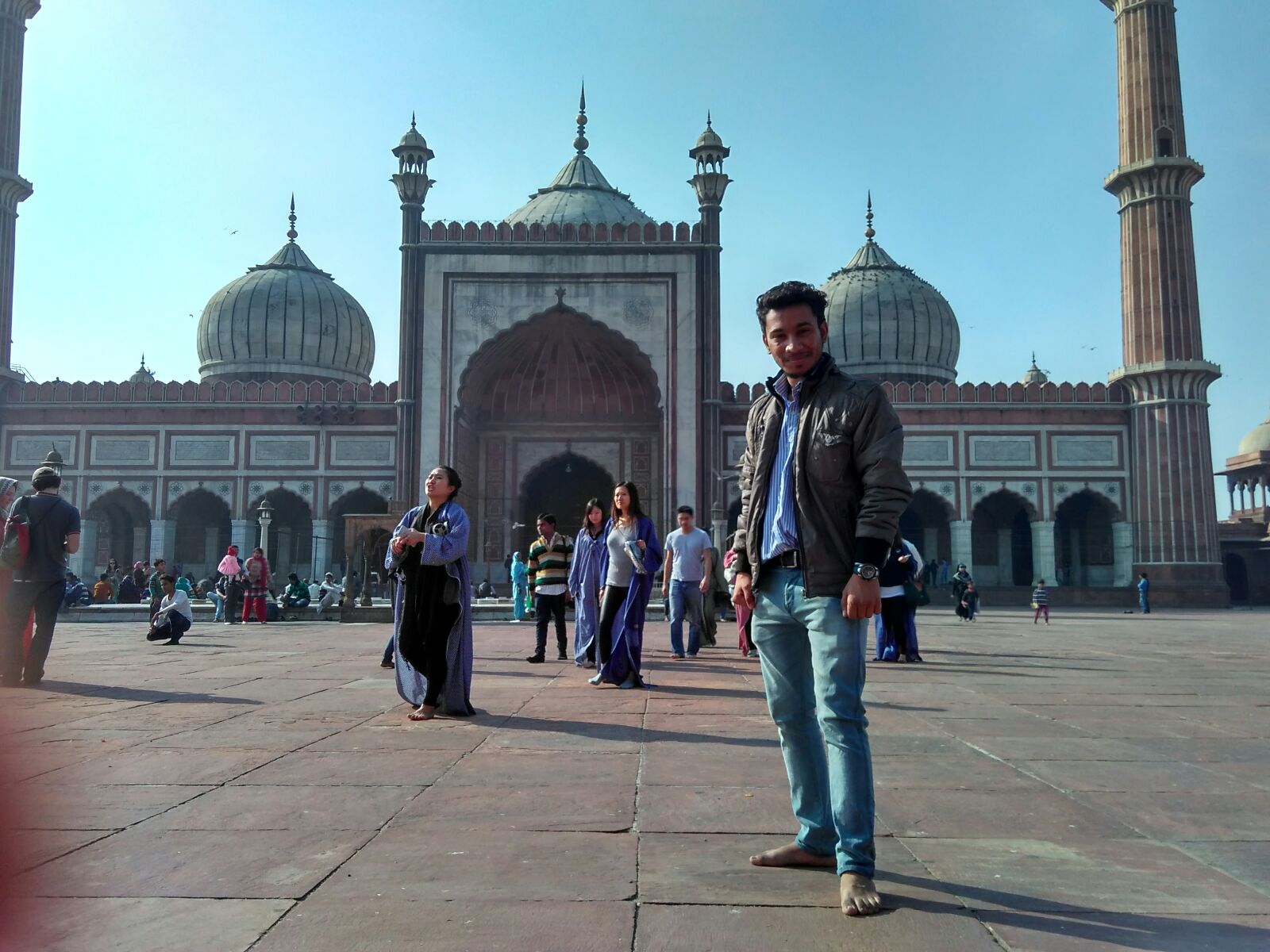 Qismat mein meri chain se jeena likh de
Doobe naa kabhi mera safeena likh de
Jannat bhi gawaarah hai magar mere liye
Ay kaatib-e-taqdeer madeena likh de
(Let a life of peace and contentment be my fate
May my ship never sink even in troubled waters
Let this be my fate
It’s not that heaven would not be acceptable to me, but
O Writer of Destinies, let Medina be my fate)

Be it bells or be it azan I don’t why or how I am being shifted to another realm. Morning was little cold as well as hot sun was above us and the wind was so beautiful which we felt when we reached at the top of the tower of Jama Masjid. That morning was quiet windy and our mind was asking something other than adventure so we hoped on for Jama masjid. The entry was done from the gate number 1 and while we going in for the gate Amit and Ayansh told me many kinds of facts related to Jama masjid. After that the most interesting part the travel to the top of the tower, we literally got little tired while going those high stairs but the end when we reached the top, the scene was so serene and fatafati (awesome). There was some amount of traffic noise coming from 2nd entry gate which was not disturbing us and when we got at top we didn’t spoke anything for some time we just stand there and keep staring the view of the surrounding, we were taking deep breaths, soft cold wind were touching us and we closed our eyes, we got submerged in those winds and the atmosphere was one of the pure and simple joy. 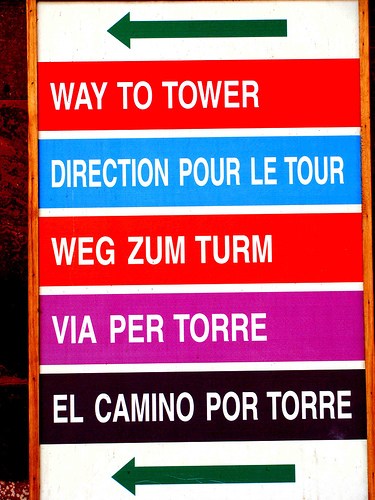 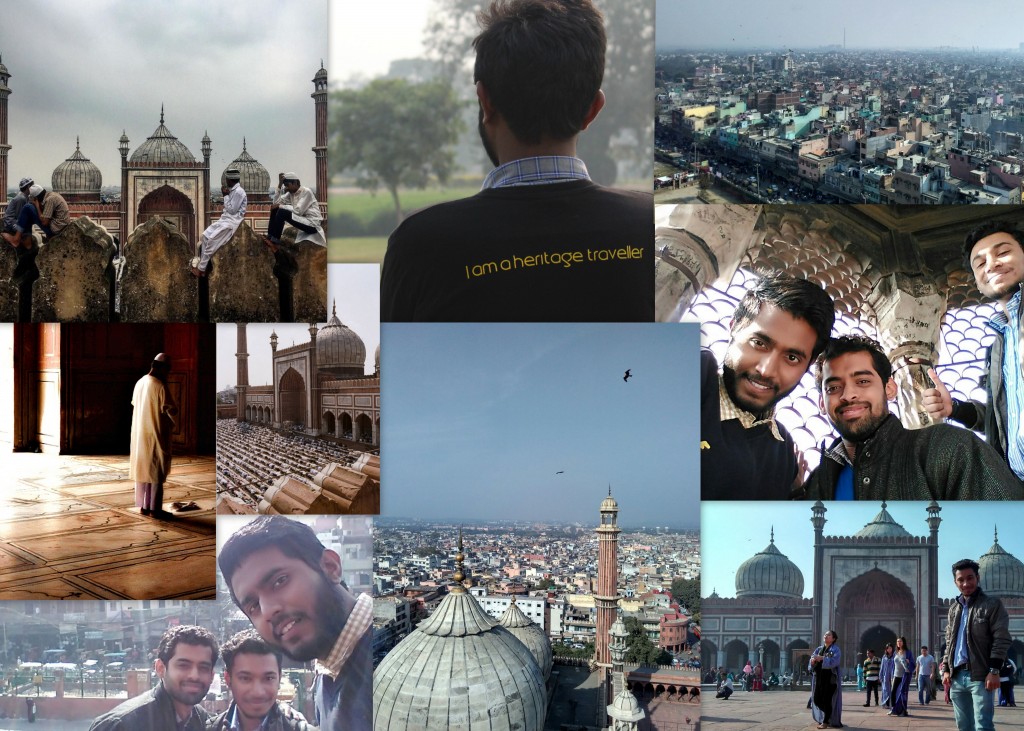 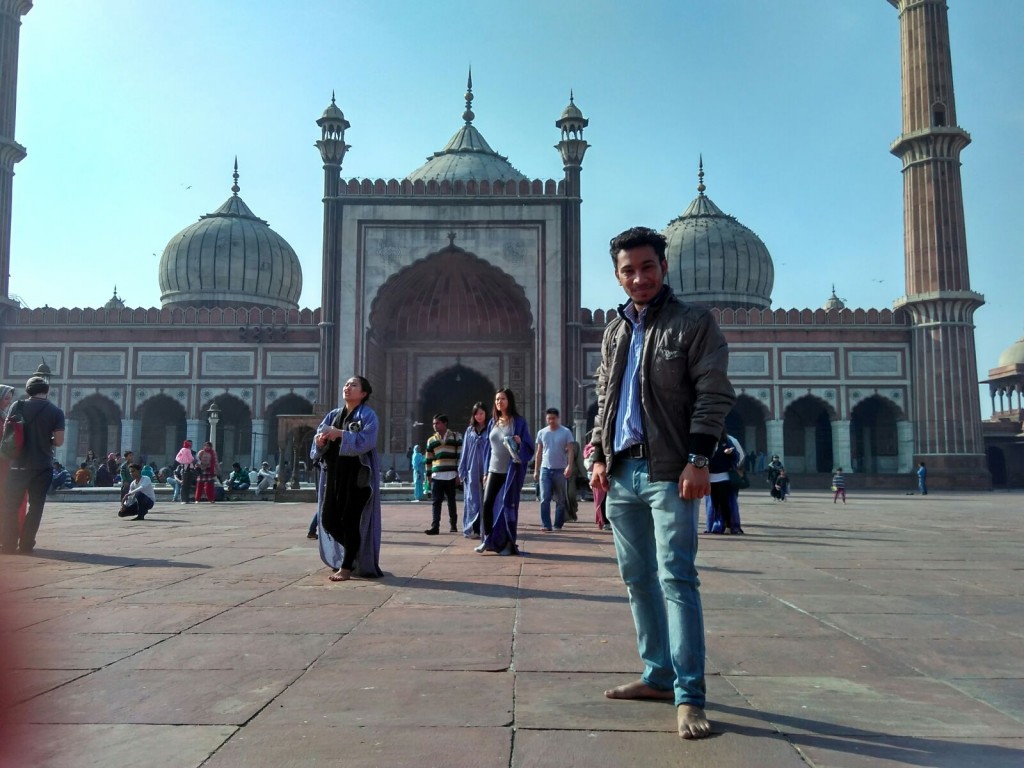 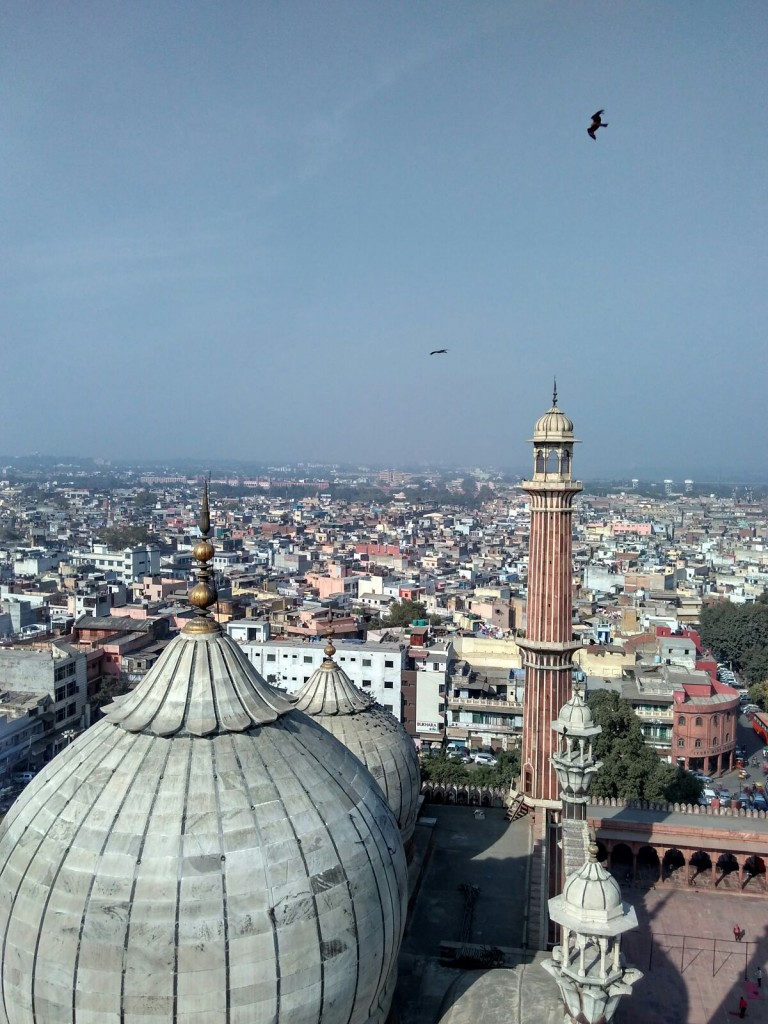 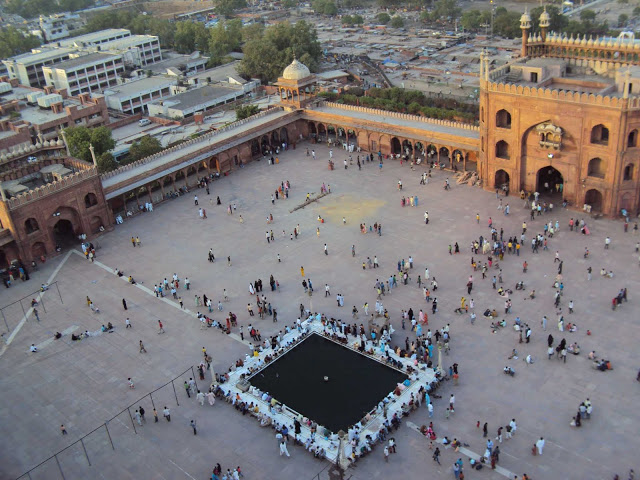 That was a day in the month of January when Amit, Ayansh, and me planned to take a tour of the biggest mosque of India, a breath taking piece of architecture which was built between 1644 and 1658, a place of relief with element of belief, a place with a courtyard as big as it can hold an devotees up to 25000, a place about which it is even been said that even if whole delhi will be flooded then also water will reach to few steps of jama masjid.

The mosque was completed in 1656 AD with three great gates, four towers and two 40 m high minarets constructed of strips of red sandstone and white marble. The courtyard can accommodate more than 25,000 persons. There are three domes on the terrace which are surrounded by the two minarets. On the floor, a total of 899 black borders are marked for worshippers. The architectural plan of Badshahi Masjid, built by Shah Jahan’s son Aurangzeb at Lahore, Pakistan, is similar to the Jama Masjid. The internationally acclaimed, magnificent, Jama Masjid Delhi originally named Masjid Jahan Numa, was built by Shahjahan (Mercy be upon him), the Fifth Mughal Emperor of India. Shahjahan himself laid its foundation stone on the strong basements of a hillock on Friday the 6th of October 1650 AD corresponding to 10th of Shawwal 1060 AH. Top experts in the field of construction, best chiselers, sculptors, engineers, best calligraphers and eminent artisans of the world assisted by 6,000 labours took part in the construction of the magnificent Jama Masjid. They dedicatedly worked for six continuous years. The Jama Masjid got ready in the year 1656 AD (1066 AH).

The mosque is about 261 feet (80 m) long and 90 feet (27 m) wide. The prayer hall measures 61 meter in length and 27.5 meter in breadth. It is made up of high cusped arches and marble domes. The cabinet located in the north gate has a collection of relics of Muhammad – the Quran written on deerskin, a red beard-hair of the prophet, his sandals and his footprints implanted in a marble block. The floor plan of the mosque is similar to that of the Jama Masjid of Agra. It is covered with white and black ornamented marble to look like a Muslim prayer mat. Beside it, a thin black border measuring 3 feet (0.91 m) long and 1.5 feet (0.46 m) wide is marked for the worshippers. There are 899 total such boxes. The architecture and plan of Badshahi Masjid which was built by Shah Jahan’s son Aurangzeb in Lahore is closely related to that of the mosque. Before the Revolt of 1857, there was a madrasa near the southern end of the mosque, which was during the revolt destroyed.

The concept of the courtyard as a gathering place for people and families is best illustrated here. The space is so vast and immense yet is held together by the colonnaded verandahs all around, with the ablution pond in the center and the huge structure of the mosque as the focus. There are all types of families and children of all ages. A lot have come to pray, some just to sit in the courtyard and colonnades and soak up the atmosphere. Children are running around playing. There is a place where the pigeons are fed grains, flocks of birds eating, and being disturbed from their feeding by the running children. They rise up into the air as one. There are people deeply immersed in prayer, facing the Mecca. People from the surrounding bazaars come in for the evening prayers while the muezzin calls, soon the power of the place takes hold of you and you are transported into another world in another age.

And at end we were going above those towers when we saw the signboard indicating the ticket was of 35 Rs. And after that some person comes and leads us the way to tower’s top. It took us nearly 15 minutes and one break because they were about 100ft tall and a panoramic 360-degree view there exposes Delhi in all its splendor and cramped buildings. Stairs were steep and we were thinking when top is going to come. But when the top came the view was fatafati and the place was small, only 5 to 7 people can stand at once but wind was so soothing when we reached up there oh my god we didn’t talked to each other for about 10 minutes the view was beautiful. Far away we can see Red Fort ramparts, a little distance away, shimmer through a mist of factory view high. But immediate scenes are more striking. The serenity of the masjid courtyard, on one side. The teeming commerce of Urdu Bazaar, on the other. More contrasts. Red sandstone versus concrete shacks. 17th century versus 21st century. And the best part: I’m so high while pigeons are so low.
So at the end I really suggest you to please go and enjoy the holiness and architecture of biggest mosque. 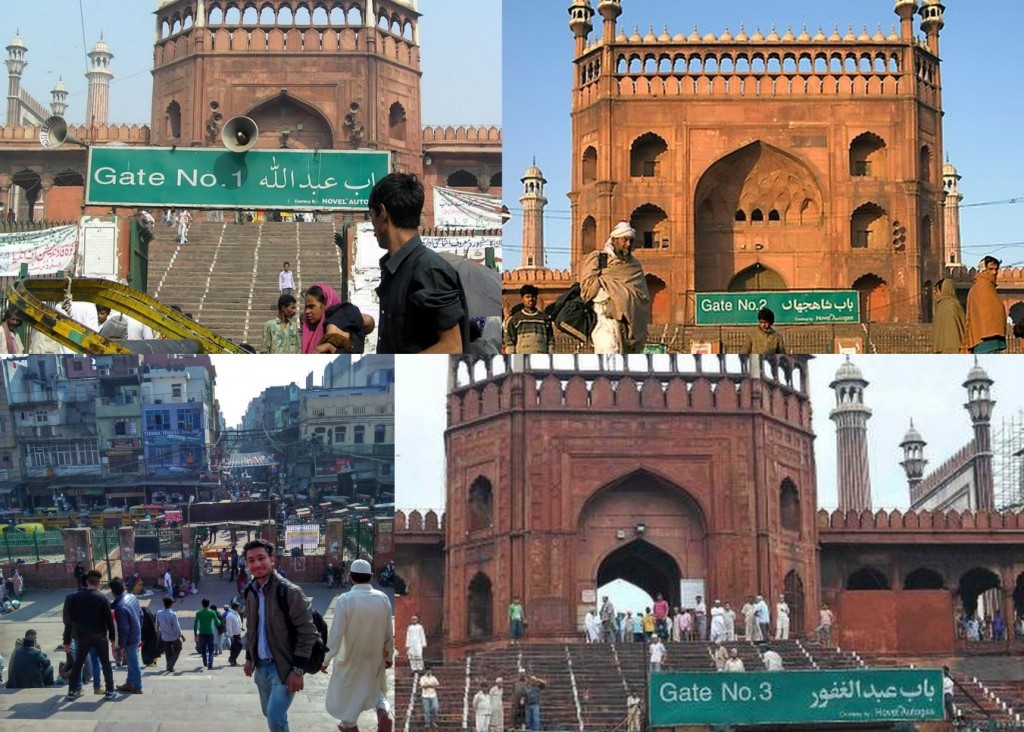