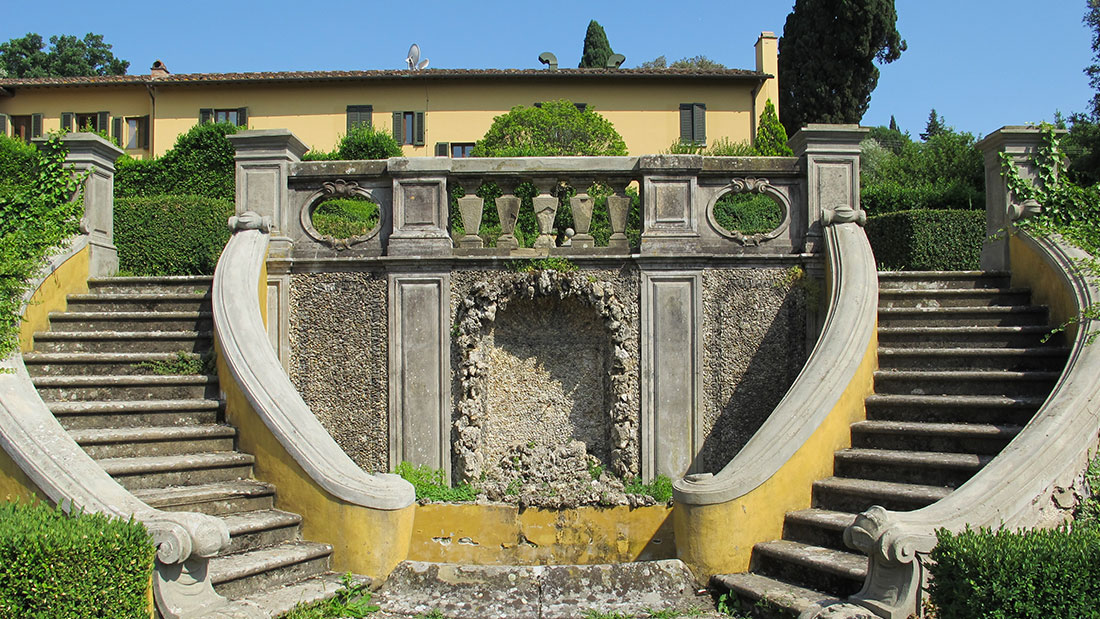 Garden design as a whole was fueled by the invigoration of newer ideas produced by the spirit and character commenced by Italian Renaissance, Monastery and Castle Gardens. Either owing to the overpowering ruling family – Medici Rulers and wealthy Florentines – Italian Renaissance, due to perseverance, method and self-sustenance creating by Monks – Monastery Gardens, or because of mythical attributes developed by miniature paintings for a certain Garden typology – Castle Gardens. All three of these Eras caused the introduction of newer principles in the world of Garden Design.

Considering the Italian Renaissance, ideas root in disciplined landscape design. These ideas could be seen in the garden of Bernardo Rucellai at Quaracchi, designed by Alberti. The second concept, which struck me, was the utilization of stairways and ramps as a new entity in Garden Design. This was seen in garden development practices at Fiesole. The ancient Romans had not solved this problem satisfactorily either. Their gardens were laid out on level or slightly sloping ground due to this problem. The third idea, which made me really keen, was the abundance of water through the mechanism of sloping pieces of land. The most vivid example of a water garden is that of Villa d’Este at Tivoli.

Analyzing the Monastery Gardens, the first concept to my liking was the knowledge of plants and herbal lore that monks possessed. Garden plants were dealt as gifts and were also exchanged with pilgrims and travellers. The second notion that was praiseworthy was the cloistered quadrangle  – which was borrowed from the classical Roman Peristyle. The monks used this space as an area for seclusion and solitude – to enjoy sunlight and fresh air. The next amusing idea can only be understood if studying the plan preserved at the library of the Benedictine Monastery of Saint Gill in Switzerland. It shows a clear labeling of plant names and species. Labels include names of all herbs and flowers associated to the very old ones as well.

Understanding the Castle Gardens, as there are no pictures, no written accounts and nothing to tell of what a castle garden looks like – but there are still characteristics to admire about the Castle Gardens. The first idea to like comes through the miniaturists and the tapestry designers who have shown joyous people found in escaping from their existing damp, noisy, poorly lit surroundings to these areas. The next idea that seems important to me is that the Castle Gardens did not take the art of topiary forward, they did not get into complicated shapes such as animals, people etc. Due to this they could focus on other important factors, which leads us to the third main point – symbolic representation through flowers, fruits, herbs in the Castle Garden. Species were suggestive enough for religious symbolic presence.

Connecting the dots of these main points from each period it is fundamentally necessary to refer to some case studies, directly relevant for the strong influence on garden design in the realm of today. While studying Italian Renaissance – Garden Art of Florence and Rome – as there was enclosure on three sides by permanent structure and the fourth side consisted of arches supported by columns – perhaps a similar instance can be seen in a landscape area developed in another context such as the summer pavilion – Baradari of Kamran Mirza, Lahore.

Borrowing from the Monastery Gardens – the concept of labeling species – something to contrast it with the gardens of today can be done using the case study of Lawrence Gardens (now known as Bagh-e-Jinnah). In today’s time a pretty much similar trait is visible of labeling trees, species, plants in this case study. It is interesting how both of these concepts juxtapose in an emphatic way.

Interpreting from the Castle Gardens – which is a period that had no written accounts, yet reconstructed using miniature paintings of its usage, functionality, nature etc. Although dissimilar in this context as a lot Mughal Gardens exist even today but there are still lot Mughal Miniature paintings  which showed activity in how a Mughal Garden was used for multiple activities – as a pleasure garden, as a meditation space, or as a social interactive space etc.

The Rani Ki Vav in Gujarat

Tasting the flavours of China in Nigeria