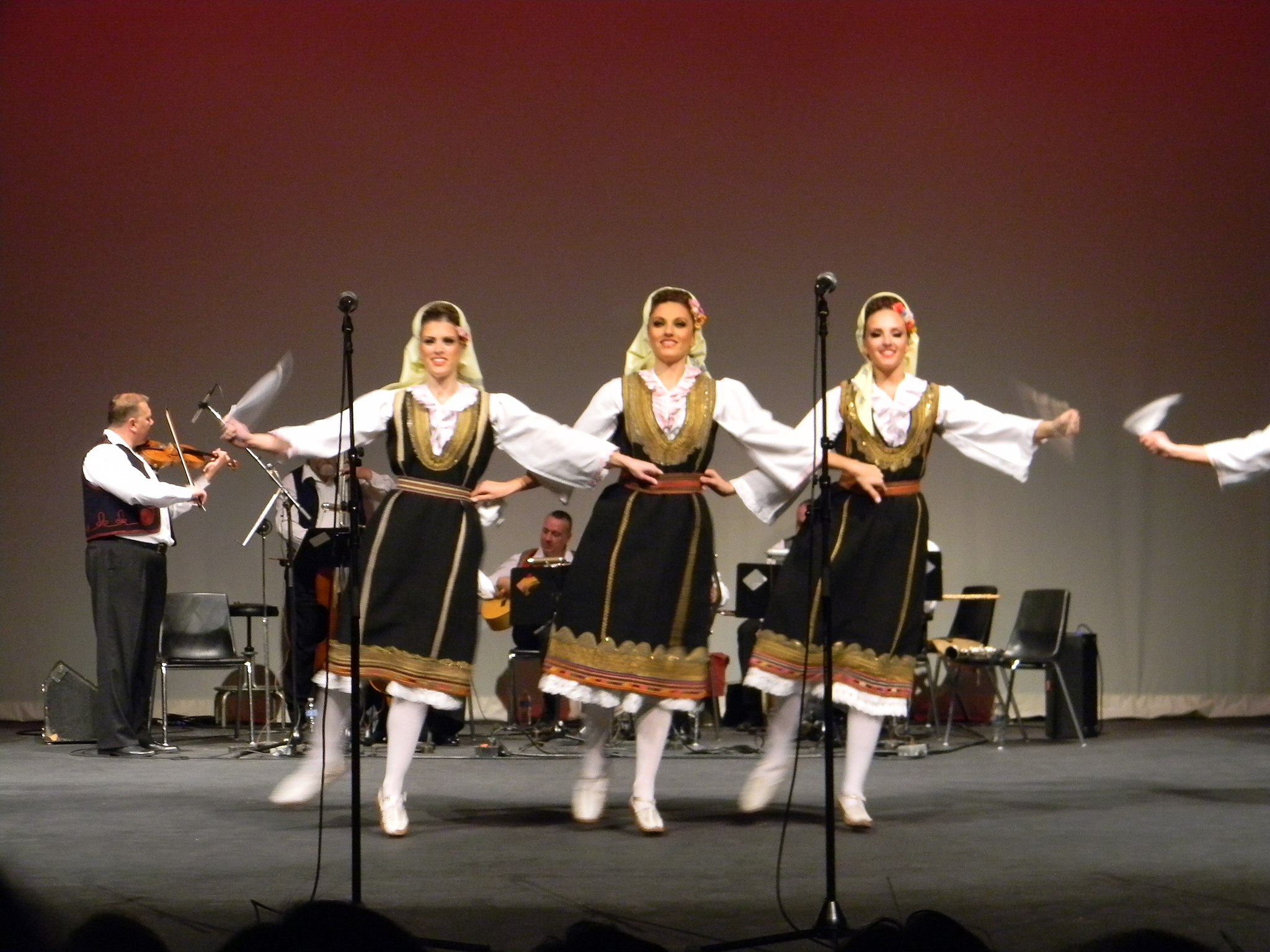 In order to experience Serbia and its tradition, one cannot leave without witnessing or taking a part (if he/she happens to be at the wedding) in a traditional folk dance named Kolo. 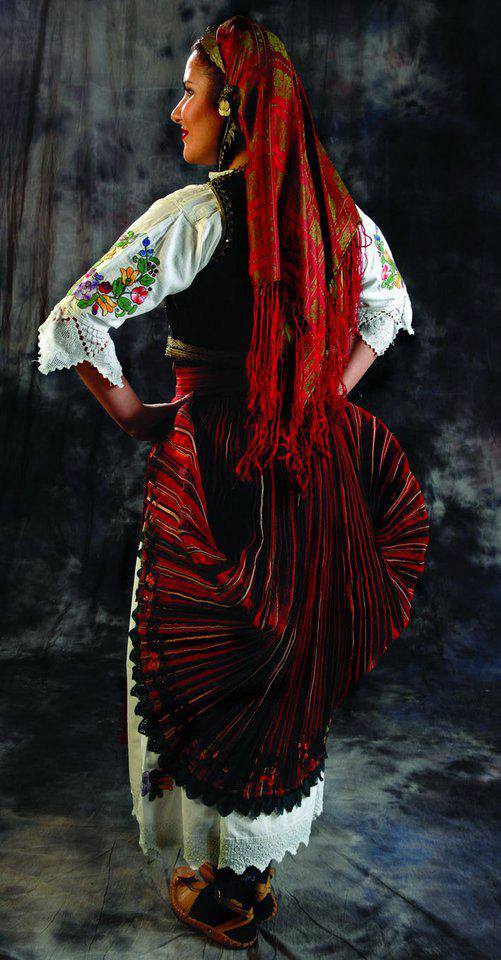 I have to admit that I am not so good at dancing Kolo and while preparing for this task I realized how much I didn’t really know about the dance and how it came to be. For this reason I decided to visit KUD “Stanko Paunovic”, Cultural Artistic Association from Pancevo city, where I had a pleasure to meet and talk with the choreographer and ethnologist Dejan Trifunovic. 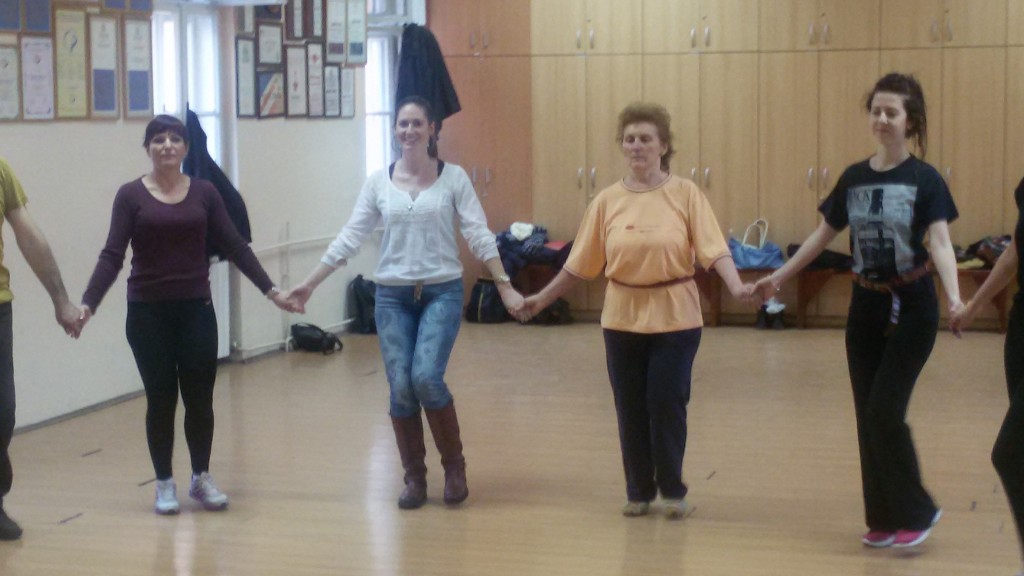 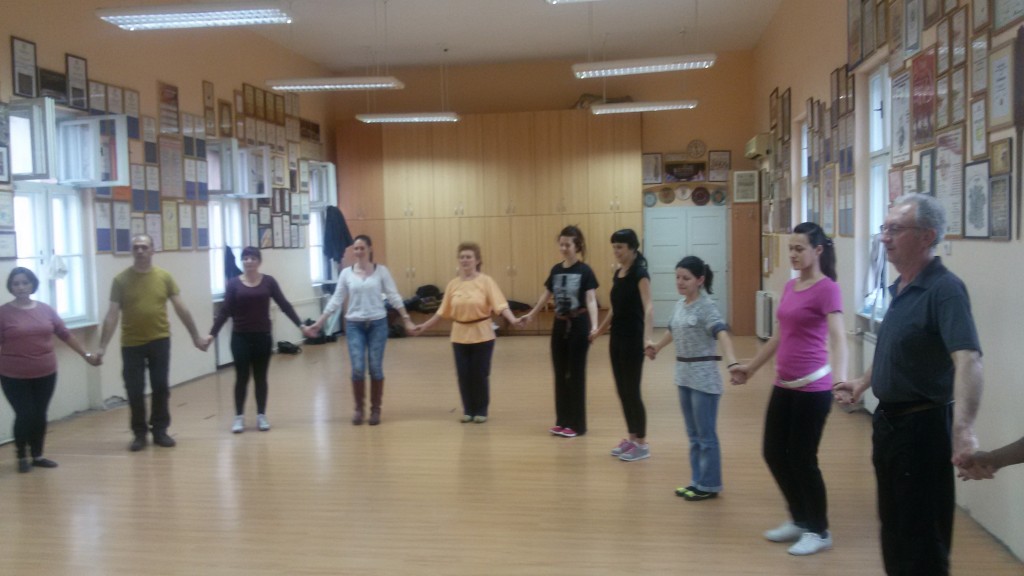 My co-worker, Jelena Andric, a dancer herself, arranged an interview with Dejan, so I got to spend a wonderful afternoon discovering more about Serbian folklore and even learn some basic steps. When I met up with Dejan, he suggested I join the beginner’s group and experience it for myself. I was surprised to see how many people were there and most importantly of all ages. They seemed to enjoy the class and gladly accepted my presence in their group. I can say that I managed, more or less, to keep up with them, though it wasn’t as easy as it seemed to be at first (especially repeating all of the steps at once).

The first thing I asked Dejan was when was the kolo first mentioned.

He said that the so called dance in 3 or 6 steps has always been part of our tradition, in different travelogues various names for this dance appeared. However, the first analysis was given by Danica and Ljubica Jankovic, sisters who between the two World Wars collected the photos of the people of that time as well as the folk costume. This was very significant for the Serbian folklore because many melodies had been forgotten. 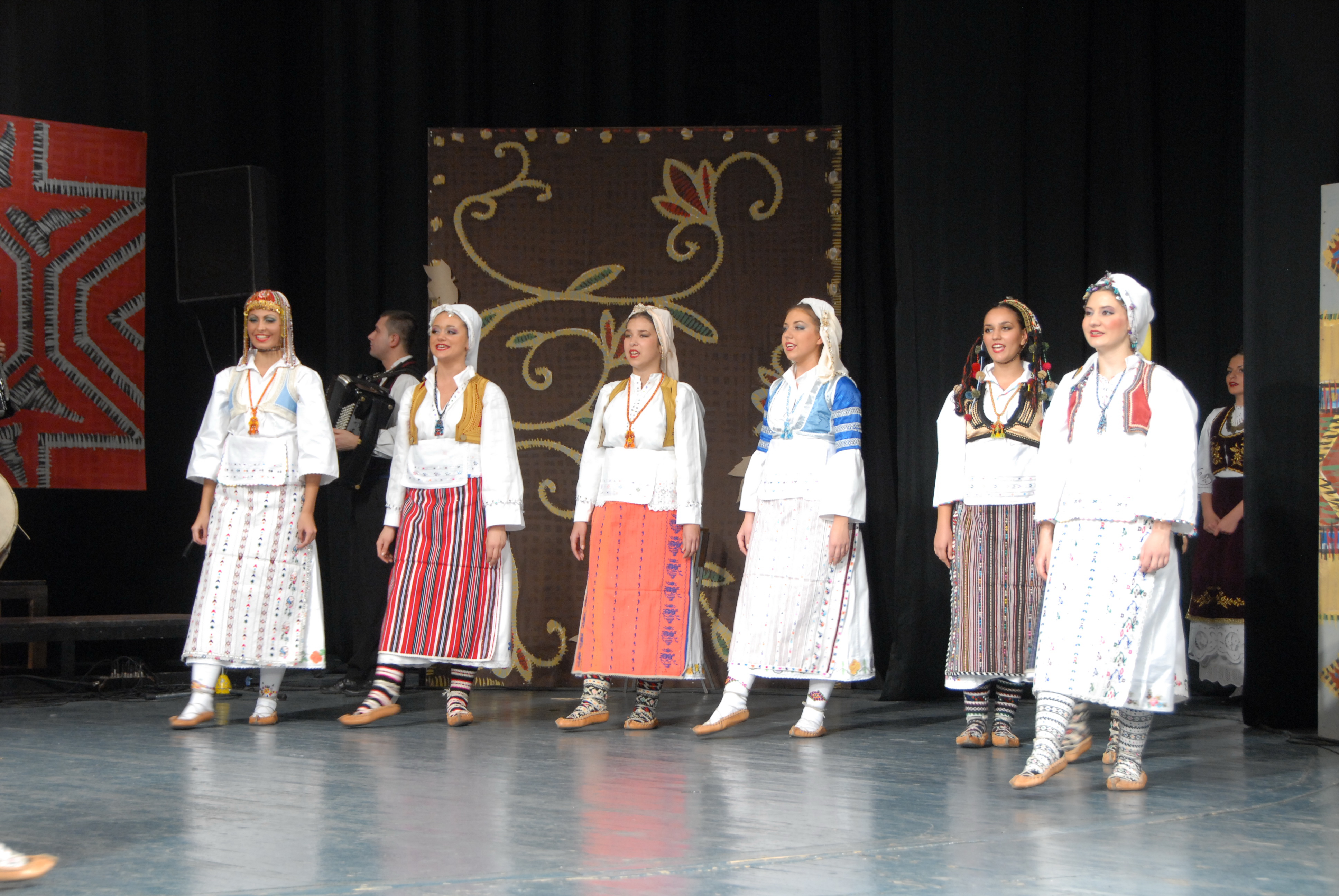 Another thing that is quite interesting is how it was divided. Today the dance is known after a region it represents. Therefore, there’s folklore dance from the Central Serbia, Western Serbia, South-eastern and North-eastern Serbia. Each region stands out with its own dance and different elements it has. Also, ritual dance celebrating a yearly cycle as well as life cycle was forming a great part of everyday life.
The well-known dodole was a rainmaking custom; lazarice was a tradition that gathered young unmarried girls; kraljice was performed in spring for an important orthodox holiday. On the other hand, the life cycle was celebrated through devojačko kolo (girl’s kolo), the kolo which started the wedding ceremony; šareno kolo (colorful) which ended the wedding ceremony. Kolo was danced even at the funeral but also to end the mourning period. However, that is not all. Rusalje is a dance that had as a leading character a woman who would be a medium between the living and the dead, sending out messages between the two worlds. 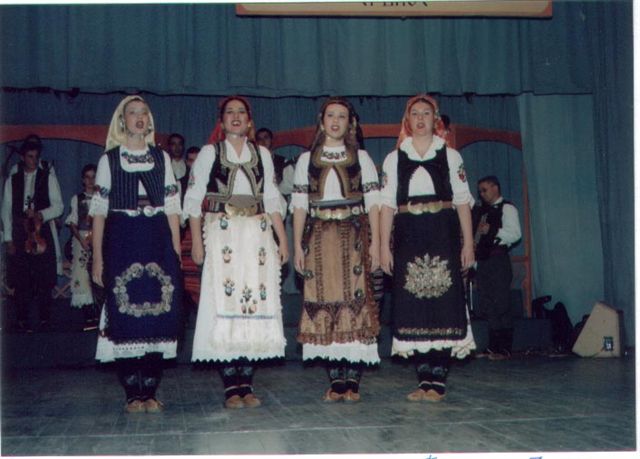 Another distinction has to be made between the kolo danced in villages and the one that later took place in cities. Historical circumstances also affected the path of this dance. After the liberation of the Austo-Hungarian rule we witness the first dances typical in towns which resemble those from the villages. In wish to get closer to the city balls organized in the Central Europe, the kolo in the cities becomes more and more popular. Kolo in the villages implied bigger distance, traditional costume as well as instruments such as gajde (bagpipes), frula (flute), dvojnice (shepard’s/ double flute), tambure (tamburitza). With the kolo in towns more classical instruments are being used and the costume is being changed, using libade that resembles the orient motifs and oglavlja (headgear). Movements are much calmer and the entire dance is stylized. 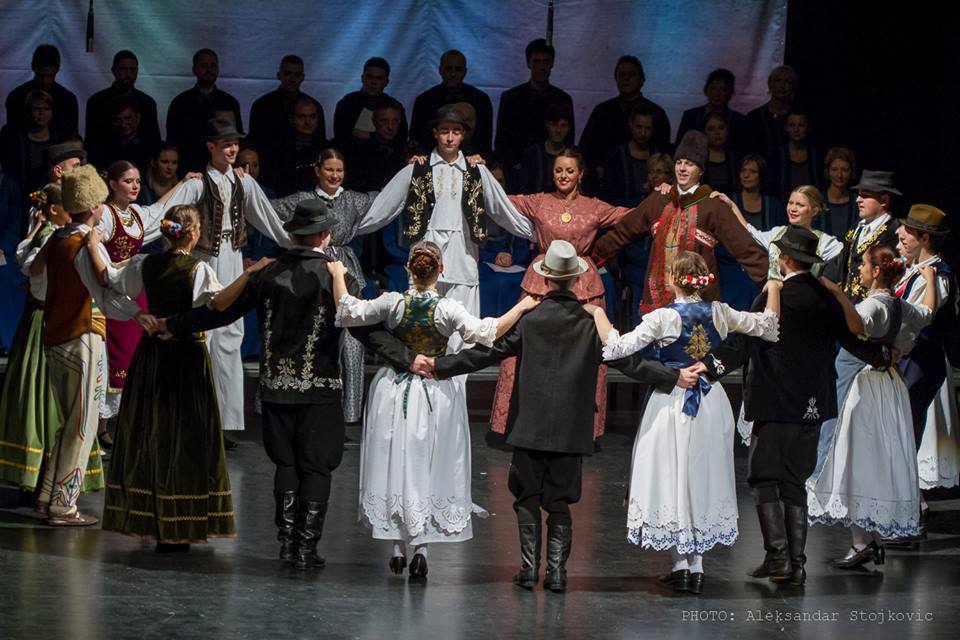 It’s funny that every guild had its own dance, so doctor’s kolo, teacher’s kolo or merchant’s kolo were danced at the party but the party had to be opened with either prince’s or king’s kolo. In fact, it is the same kolo Srbijanka that was danced, the only thing that changed due to different political system was the name. 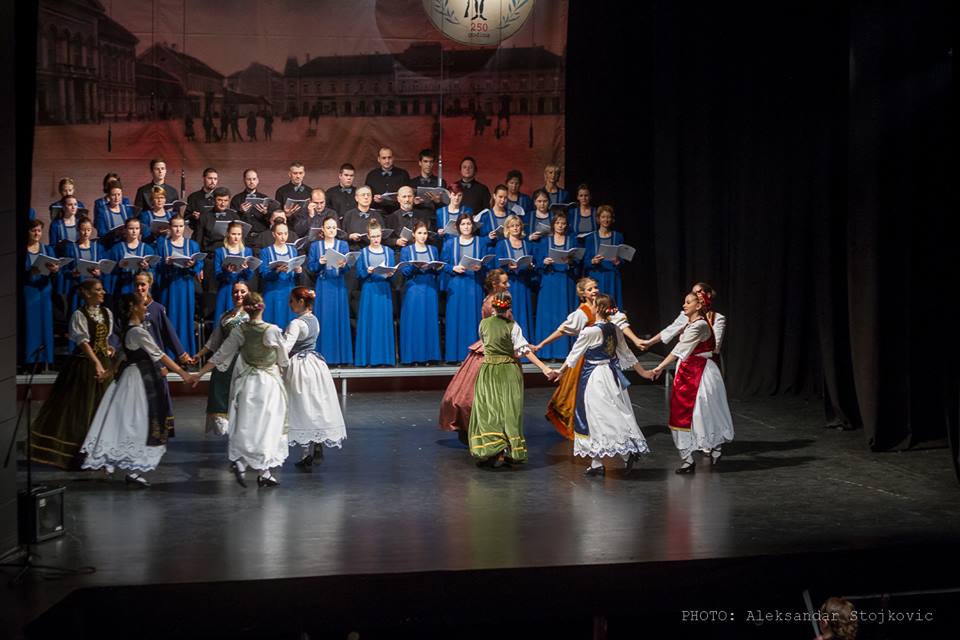 Today these different names and types of kolo exist only in Cultural Artistic Association and have little to do with a simple 3 to 6 steps kolo danced at the weddings. However, the interest in this old Serbian tradition has never ceased. The best proof is more than 500 members in KUD “Stanko Paunovic” which has 14 groups of both children and adults. For the first time they have a foreigner in a group. I had a chance to meet Di who is married to a Serb and moved to Pančevo from the United States. When I asked her why she decided to learn kolo she answered that that was the best way to understand better the Serbian culture and tradition. Also, she said that she likes the music and the rhythm.

For Dejan it all started as an extracurricular activity which grew up to be his profession and his passion. Even as a little boy he took every performance seriously and got prepared the best way he could. Later he got back to folklore thanks to his sister who wanted to attend classes with her girl friends. Although she quit after some time, Dejan remained faithful to this dance. Today he is trying to pass on to new generations not only one of the oldest traditions but also love for this dance and its significance for the Serbian culture. When it comes to dancers, Jelena Andric shared with me that one of the things she cherishes the most are the friendships and all the great memories she has from different festivals.

Intangible art manages to impact people’s lives more than we could ever imagine it was possible. For me it was a great experience that will certainly stay with me forever.
Intangible cultural heritage asset

My Rendezvous with The Potraj Community