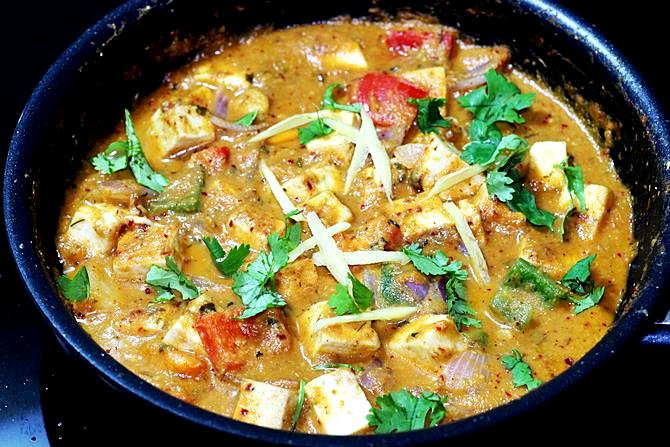 Cooking Indian food can be a unique experience to a foreigner.

Indian cuisine is one of the most popular foreign cuisines in Britain, where dishes such as tikka masala have become as common as fish and chips. The close relationship between Britain and India goes back to the 15th century and since the colonial era many types of goods and materials have been imported from India to Britain. The first Indian restaurant in London, the Hindoostane Coffee House, was opened 1809 and, during the Victorian age (1837-1901), Indian curries became popular with the English.

A fellow intern, Ms Mohini Singh, introduced me to her favourite dishes, which I have not tried before: Kadhi Chawal and Kadai (Kadhai) Paneer. Although these dishes have their own regional and state variations with regard to ingredients and preparation, they are most commonly enjoyed in upper-central and northern India.

The cuisine from regions such as Awadh and Punjab, along with some parts of Pakistan, can be described as moderately spicy. Most of the dishes have a creamy, gravy-based texture.  A combination of vegetarian and non-vegetarian foods, dairy products, dry fruits and spices are common. Dishes often include meat and vegetables cooked in a pot / wok (tandoor, coal/wood fired barbecue, masonry ovens). Dairy products are commonly used (cream and yogurt) in dals and marinades.

Description: It is a yoghurt based curry and rice dish. ‘Kadhi’ means ‘dish’ and ‘Chawal’ means ‘rice’)

Serving suggestion: the dish can be complemented with Basmati rice or Roti

About the dish: Kadhi Chawal is a popular rice-based dish whose ingredients and preparation depend on where in India it is being prepared. It originated from local peasant foods as a nutritious and simple meal. Kadhi chawal can also be served like a soup. It is usually served as a simple and quick winter meal in northern states such as the Punjab. The dish may consist of vegetable fritters called pakoras and additional vegetables to add flavour to the dish.

About the dish: The dish is believed to have many origins and influences. ‘Paneer’ is a Persian word, and the use of fresh cheese in cooking is derived from South Asia. Vegetables such as onions and tomatoes accompanying such gravy is derived from the  Portuguese. The techniques  of Kadhai cooking are similar to those used to make  dishes local to Pakistan.

Verdicts: How did the dishes taste?

It was easy to prepare these dishes. They can be served and eaten either as a main or side dishes, or in a meze-style combination. The use of a variety of ingredients, herbs and spices provided  each dish with unique characteristics and flavours. Both dishes go very well with rice, Naan or Roti.

Along with many other regional dishes I came across through my research, the dishes I prepared were an inspiration for me to attempt a wider range of dishes that I have not tried before. This is not only a great opportunity to break from the routine but a tasty way to explore the cultural heritage of different regions!