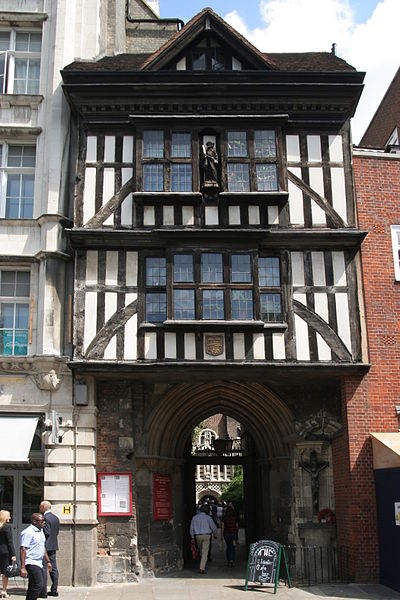 Having survived the flames of the Great Fire, the Bartholomew Gatehouse is a structure that still stands tall in Smithfields, London. The Great Fire of London was a major conflagration that swept through central London in 1666, lasting for three whole days in September of that year. The disaster destroyed more than 13,000 houses and badly damaged many famous landmarks of London, including St Paul’s Cathedral. The Gatehouse is exemplary of a few sites that survived the flames.

The gatehouse is the entrance to the church of St Bartholomew-the-Great. One of the oldest parish churches in the City, it was created in the 12th century as an Augustinian priory. Built by William Scudamore in 1595, the gatehouse was built after the initial destruction of the Church in 1536, when the monastery system was dissolved. It was constructed to meet the Tudor architectural standards and separate the busy main road and the churchyard.

It  consists two floors along with a small attic, and was therefore more impressive for its location than its inside features. It provides a connection between the buildings adjacent to it, and is often used as a pathway. Despite the fact that the building had been built with an exposed timber frame, the walls of the priory somehow managed to provide enough protection to save it from the Great Fire.

On the top story of the gatehouse is a sculpture of William Silver Frith designed by Sir Aston Webb. It was added during the restoration process that was undertaken between 1886 and 1896. In 1996, a conservation charter was passed to protect the structure.

The gatehouse was not the only means of entrance to the church, and was also once used as a shop. Evidence for this was discovered after the building suffered some damage from a bomb dropped by a German Zeppelin in 1917. Despite the restoration, some of the original nave stonework remains. The original panel in the attic and the bolection-moulded panel dating back in 1700 on the first floor are also intact. The area in which the gatehouse is located is seen as being one of great historical importance. It contains many structures dating back centuries, along with parts of the original wall from the time when it was occupied by the Romans.

Some Fun Facts about the Gatehouse

I once worked nearby and was aware of the gatehouse and its surroundings. Until I wrote this writeup about it, I didn’t know its true cultural value. It is often fascinating what can be learnt through exploring the history of such sites which may be found in any corner of a village, town or city and which we too often take for granted.   Why not add this #builtheritage site to the list of places to visit on your next trip to London!

Salamanca in the Middle Ages: A Photowalk

Forgotten Heritage: The Devdis of Hyderabad