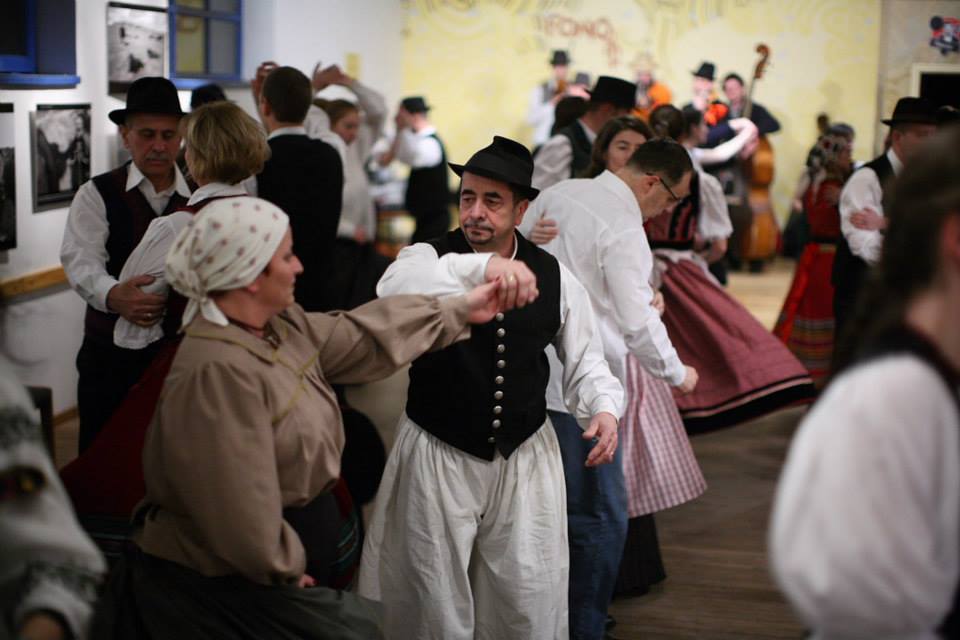 The origins of our folk dances date back to the ancient times, when they served as parts of some rituals. They might have also been martial dances according to their masculine character, so that it is full of men’s improvisations: “the men free their partners when, and for so long as, they feel inclined. Thus their hands are free and they can again take hold of their partner when they wish…” (Viski, 1937).

The dance itself can be described as one which communicates strength, but also playfulness, its unique moves without transition and the atmosphere it generates make the dancer feel obsessed. This obsession also gave reason to some negative judgement in the past, so that the dances were named the devil’s craft, and became prohibited for some time in the XII. century.

The dance moves become unique based on the actual person dancing, and the types of dances change from region to region. Most of the time the dances are closely associated with specific music, and they are important elements of community life, which means they are performed with a purpose (Czompo, 2006). The shapes of the playful dances lead to the former presence of a central fire, and the usage of sticks in some types of dances remembers the fights of history (representing swords and other weapons).

According to György Martin, a prominent folklore expert, Hungarian dances can be divided in two categories. The first refers to dances performed in the middle ages, while the second relates to the 18th and 19th century (Czompo, 2006). The systematisation of these colourful dances is almost impossible and its knowledge comes by inheritance from father to son. Divided by geographical regions we can distinguish between:

Western Region:
From the Austrian border to the Danube River, which is essentially all of Western Hungary. Mostly new style dances are found here. Obviously this was the area that was most influenced by Western musical and dance fashions.

Tisza Region:
From the Danube River travelling East to the Romanian border, both sides of the Tisza River. This area preserved many old style dances, but new style forms are also abundant. The Szatmár (North- Eastern) Region may exhibit the “most characteristic” form of Csárdás.

Transylvanian Region:
Politically this area constitutes the Western part of Romania at this time, but we can find the most versatile and beautiful, often archaic folk dances which were preserved here due to the political and geographical isolation from western influences. All forms of dances may be found here, but they are specific to small geographic areas or even specific villages. The uneven development of music and folk dance is most interesting and exciting in this region (Czompo, 2006).

The most popular dances are:

To see a dance performance captured by me –> Click Here. It was a Transylvanian Szekler form of Csárdás. Lessons take place more times a week in communal spaces where people gather to share their joy for culture. The actual one I visited is located in Buda (Western part of Budapest), called “Fonó”. They are popular for their folk nights, concerts and festivals.

You can check their programs here: http://www.fono.hu/en
Their YouTube channel gives you a better sight of folk dances and music performed nowadays in Budapest:
https://www.youtube.com/playlist?list=PL70922517D9A1CF4A

Wand is up, the music begins – Opera