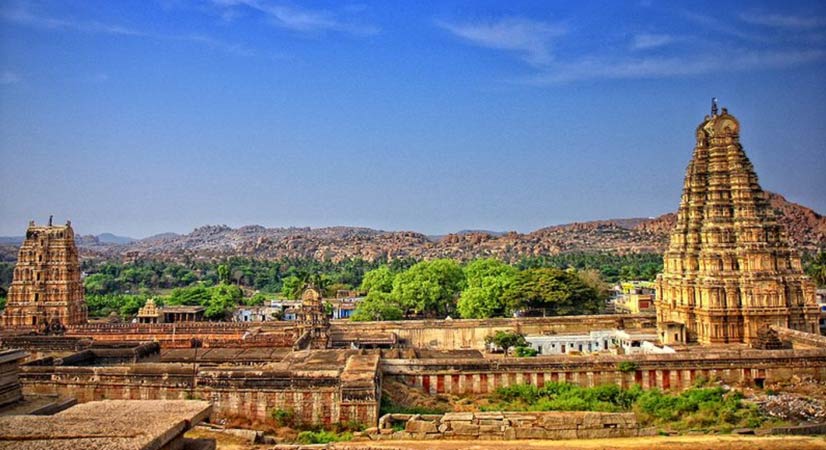 The key areas of community interaction is based on the following aspects:

Located in Northern Karnataka is the village Hampi constituting a complex of various monuments as parts of the ruins of Vijayanagara, the capital of Vijayanagara Empire during the 14th and 16th century A.D. The site of the village is a magnificent blend of both natural and man -made vocabulary. The nature thus coincides well with the environment that promotes cultural, social and religious insights among the community.

Hampi derive its name from Pampa, old name of Tungabhadra river that flows nearby. The site sits on a platform of strategic importance i.e on one side it is touched by the Tungabhadra River and the remaining three sides are occupied by defensible hills. The site is also found with mineral deposits leading to the mining of iron-ores which has now become a threat to the heritage of the vicinity. Agriculture is the main industry of the area.

The overall architecture of the complex can be broadly divided into three main types; Religious, Military and Civil.

Varying in the materials employed for different typology of buildings within the complex developed a certain architectural style for a particular time period e.g Chalukya, Hoysala, Pandya, Chola, these all style presented the simplistic arts in their time. For example, the use of soapstone for sculpting in the former periods was replaced by the use of granite in the latter periods owing to the durability of the material itself.

Hampi as a center of religion is composed of temples both small and large. The basic layout of a large temple comprises of an enclosure wall with a monumental tower called ‘gopura’ that serves as the main entrance to the temple, an open pavilion supported by pillars termed as ‘mantapas’  to serve as public ceremonial and the main shrine dedicated to a deity, a goddess. These temples are further adorned with murals, relief panels and other legends of various gods.

Provided by the location of the village, Hampi is well defended by the natural fortifications around the site i,e the river and the hills. Other than that Hampi is known to have been fortified with seven lines of walls, out if which  one complete line can still be seen and parts of three more lines are also visible at the site. Again the walls have been made out of granite stone. These walls consists of gateways and bastions.

Besides the above mentioned structures the site is also found with buildings of domestic and public use, spaces that provide the interaction between community and components that help in the development of standards of living, uplifting them and comforting the residents or the users of the site. These structures include pavilions for public ceremonies, the system of water management through the use of aqueducts, tanks, water ponds and stepped wells that made the access and storage of water easy.

The hierarchy of power is very significant in the area, owing to the presence of strong religious values, rituals and deities represented through the scale of the temples and the ornamentation, both painting and carvings with which these temples are embellished. Other than this the defense also played an important role in the village of Hampi, which contained at least one million men at that time.

Taking a closer look at all these facts and figures we can conclude that the relationship of a person in his/her environment makes the place a religious center. These space become an integral part of the life of the residents, providing them with an increased amount of interaction, congregation and relations.

The institutions in the Hampi village overlap and integrate the public and private activities of the society in order to develop a socially, culturally uplifted society with a character and language that encompasses through its territory, functionality and design. The Hampi bazaar that runs for about 728 meters and was 32 meters wide also represents the dynamic interaction of the community inside the village that promoted the interaction among people.