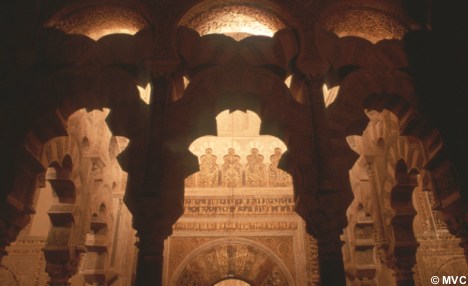 The world renowned historic centre of Cordoba has a wealth of monuments preserving huge traces of Roman, Arabic and Christian times in its kitty. The historic centre as defined by UNESCO comprises the buildings and narrow winding streets around the cathedral. Cordoba is situated on the Guadalquivir River, the Andalusian route leading to the Atlantic Ocean. It is close to the Sierra Morena mountains and the passes which allow access to the Meseta. The historical background is a long journey of the city and their people . Upon the arrival of the Romans, they erected solid foundations around the town. At the outset of the 1st millennium A.D., the city became the capital of Hispania Inferior (Baetica) and the Roman metropolis of Andalusia. Following the Visigoth invasion of 572, Córdoba became part of the dependency of Toledo, which was capital of unified Spain. Shortly after the invasion of the Moors in 711, the city was made capital of Muslim Spain. In 756, Abd-al-Rhaman, the last descendent of the Umayyads of Damascus, settled there and proclaimed himself to be its ruler. The Great Mosque, his masterpiece, is the most splendid monument of this Eastern civilisation in the territory of Spain. In the 10th century, after acquiring the status of a caliphate, Córdoba experienced a glorious heyday. As the most populated city in the West, it rivalled the great capitals of Islam; within its limits are as many as 300 mosques. In the 11th century, the caliphate became politically divided. The Almoravids and the Almohads, two dynasties of Berber origin, re-established peace during the 12th century. In 1236, the expulsion of the Moors by Ferdinand III, combined with Córdoba’s joining the Christian kingdom of Castile, led to a long decline. In the 15th century, under Charles-Quint, the Great Mosque, which had already been adapted to the new religion, was transformed into a cathedral. Cordoba is best known as being home to one of Andalucia’s three great monuments: the Mezquita the other two being Seville’s Alcazar and Grananda’s Alhambra. Like the other two, the city embodies the region’s rich cultural and religious history: the Mezquita – which dates from Cordoba’s zenith, as capital of Al-Andalus and the largest and most important city in Western Europe, with 500,000 inhabitants – is, in fact, a mosque with a cathedral inside it. During its hugely prosperous and successful Moorish Caliphate era (766-1031), Cordoba was a great cultural, political, financial and literary centre, with the largest library in the world. The city also has a Jewish Quater the synagogue is one of only three surviving pre-Reconquest ones in Spain. After the Mezquita, Cordoba is probably most famous for its magnificent flower-filled patios, with their annual open door contest festival. Preceded by the Cruses de Mayo competition and with the Feria at the end of the same month, May is the best month to visit Cordoba.

The Historic Center Of Sighisoara