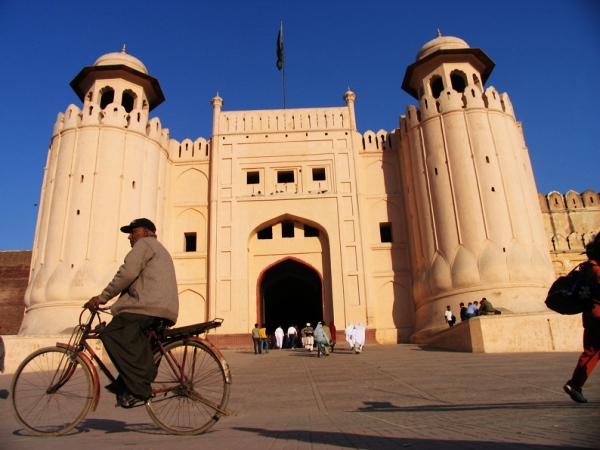 The extended series of multistory chambers beneath Lahore Fort attests its grandeur and testifies it as a marvel of architectural engineering. This interconnected substructure is located under Shah Burj quadrangle in northwestern rim of the fort. The place is known as Summan Burj or summer palace. Apparently, the vast complex of underground chambers offers a comfortable environment for the living during summer but the purpose of its construction was not solely to make a summer house, but also to provide a sound embankment toward River Ravi and to provide a consolidated platform to construct multiple structures atop.

Work on this innovative idea of architectural engineering began in Akbar’s period. Though it was a simple solution to the threats caused by the river-like flooding and erosion but it proved highly sophisticated in terms of engineering.

In a research on the underground archaeology of Lahore fort, Archaeologist Rustam Khan finds that Akbar devised the idea to build these two to three-storied labyrinth style interlinked basements on the north of the mound along the river side. The idea of this type of architectural brilliance was new to India.

After Akbar and Jahangir, Shah Jehan also continued work on the project, both under and over the ground and numerous chambers, colonnades and courtyard garden were constructed in the respective periods. Regarding different floors of the basement, the research realizes that upper storey of the basement was mainly used for residential purposes, middle for the storage and guards and the third or ground level, where still we can find a few chambers, seems a safe passage through River Ravi.

Although by the historical and architectural point, these chambers stand significant part of the fort but it has largely been a forgotten subject for our archaeologists and historians.  So we are mainly short of perfect knowledge how these hidden wonders of the fort have been used over the time. Anyway, the available set of knowledge suggests that until end of Sikh period (1849) these chambers have been used primarily for residential purposes. But the British rulers added here numerous constructions and altered the shapes and purpose of many old buildings. It is said that during that period basement chambers were mostly used to store liquor. On Hathi Pair stairway, in the northwest corner of the fort, we find a door on left hand; it is the entrance to the basement chambers. The door or this entrance was devised during the British period.

During that period the department mainly worked to remove decades old layers to discover wall paintings, masked with white wash. The archaeology department has stated in its annual report of 1978-79 that civil defence made unreasonable editions and alterations in the arches. Almost all main arches were bricked up in order to shape them like rooms. Other than interventions the act of white washing also harmed the beauty of basement chambers, particularly the fresco paintings of the Mughal era.

Although it is believed that conservation work done by the archaeology department in 70s had restored much of the basement chambers, still this part of the fort remained inaccessible for general visitors. And the status remained unchanged for next almost twenty five years. In June 2006, it was reported by the newspapers that Punjab archaeology department is going to set a week-long photo and paintings exhibition in basement chambers of Lahore Fort during 2nd week of July 2006. It was amazing to think that the basement chambers are going to open for public, for the first time in history of the Fort. The news also told that an auditorium is being set up in the basement chambers for functions the and some US experts have offered to help set up the auditorium. But it could not happen, neither the event was organized nor the doors of the chambers ever opened to the general public.

A decade has passed since that and in meantime many things have changed in the affairs of Lahore Fort, including shifting its administrative, operational and functional charge from Punjab archaeology to Walled City Lahore Authority in October 2014. But the big decision of opening this rarely seen premise of the fort is still pending. Locks of the basement chamber are still intact and none is allowed a glance inside unless he has special permission from the Directorate of Punjab Archaeology or now from the Walled City of Lahore Authority.

Definitely the basement is a wonderful place and many points of tourist’s interest are there like wall fresco of Mughal and Sikh periods, tunnel like ventilation openings, underground water tank, massive halls and corridors. If opened it can attract a great number of tourists and add-in the revenue of the fort and it would also be a source of information for the tourists because the persons who come to see the fort are certainly eager to know how the massive structure was built and how it looks like behind monumental picture wall.

More than a decade has passed since last time the conservation work was done in the basement chambers of Lahore Fort. But due to remaining permanently off bound the deteriorating condition of the basement is also worsening and the area is damaging by increasing water logging, a clear threat to the strength of the structure. Significance of the basement is obvious, as all prominent masterpieces of Lahore Fort are based on it, and if this base is loosened, it could be a disaster for the national heritage of Pakistan and for the world as well.

Aown Ali (aownali@gmail.com) is a Lahore, Pakistan based photojournalist, particularly interested in documenting architecture worth historic significance. You can find his work on www.orientalarchitecture.com and on Dawn.com