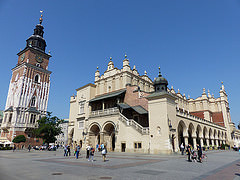 I visited this WHS in September 2014. I spent 5 days in this beautiful city and used it as my base for other nearby WHS. It really is one of the most beautiful cities in Europe. Not too big, not too small and still not too crowded although I visited in the summer months. My hotel was overlooking the Vistula River and the Wawel Hill so it’s the first place I visited in Cracow. You can easily spend a whole day here as there’s quite a lot to see. The different spires of the Wawel Cathedral immediately catch your attention especially on a bright sunny day. Next to it is the Wawel Royal Castle with its beautiful tiered courtyard. Both are worth visiting although I’d suggest visiting the interior around lunch time when most of the tourist groups are away. The best place to have a panoramic view is from the Sandomierska Tower. It only costs 4 zloty to visit and there are only 137 steps to climb. Next I headed towards the Rynek Główny which is the largest medieval town square in Europe. The centre of the square is dominated by the Sukiennice or the Cloth Hall and the Town Hall Tower. Again I felt like climbing to have a panoramic view of Cracow and so I paid 7 zloty to go up to the top of the Town Hall Tower. The Cloth Hall now houses an interesting museum on the top floor, several handicraft stalls in the gallery and an underground trading hall. The horse-drawn carraiges really add to the overall atmosphere even though a bit touristy. In front of the Cloth Hall is the unique St. Mary’s Basilica with its two different towers. Every hour the Hejnał Mariacki is played from the top of the tallest tower. The trumpeter stops abruptly to commemorate the famous 13th century trumpeter, who was shot in the throat while sounding the alarm before the Mongol attack on the city. Another very interesting part of Cracow is the Kazimierz district, especially the Jewish part, with several synagogues, a Jewish cemetery, lots of interesting Jewish graffiti and cool bars and restaurants. The Jewish ghetto is in the Podgorze district and the main sights there are the Memorial on Ghetto Heroes Square and the Schindler’s Factory, which had saved nearly 1200 Jews from the concentration camps. Don’t forget to try the local pierogi (dumplings) when you stop for a quick snack.
Cracow’s Historic Centre – Poland

https://www.gounesco.com/heritage/proof/polands-treasure/https://s3-ap-southeast-1.amazonaws.com/gounesco.com/wp-content/uploads/2014/09/14062158/krakow.jpghttps://s3-ap-southeast-1.amazonaws.com/gounesco.com/wp-content/uploads/2014/09/14062158/krakow-150x150.jpg2015-12-24T15:38:27+05:30TrailblazerCracow's Historic Centre,poland,trailblazer,travel,world heritage travel
I visited this WHS in September 2014. I spent 5 days in this beautiful city and used it as my base for other nearby WHS. It really is one of the most beautiful cities in Europe. Not too big, not too small and still not too crowded although I...
clyde.triganza@ec.europa.euProof_userGoUNESCO | Go UNESCO
Tags: Cracow's Historic Centre, poland, trailblazer, travel, and world heritage travel.