When in Italy there is no such thing as boredom.
This is why the #makeheritagefun events are so important for the Country.
Italy has about 60 million inhabitants but only few of them are aware of the immeasurable treasure they are surrounded by. When you, as a foreigner, walk around any of the land streets, you can not stop turning your head around looking at the buildings. But we, the Italians, have been raised sipping the world’s best wines and studying in amazing ancient buildings. We are submerged in beauty we can not even see.

This has happened to me while I was driving to the Aquileia’s Basilica earlier today. I was so busy adjusting the tomtom on the dashboard that it took me a red traffic light to see that I had already entered the small town of Aquileia where the streets are surrounded by ancient Roman remains openly exposed to wanderers.
History was all over and even the parking lot made me feel like I was living in another time, maybe because of the Roman columns standing behind the church and the perfectly trimmed trees.

The Cathedral was built in the fourth century, as soon as the Christians became legally accepted in the Roman Empire. In the following centuries, the Basilica was rebuilt four times and what we see today is in Romanesque-Gothic architectural style (read: bricks and heights). Unfortunately, all this “building-over” has caused damage to some of the works, but a good preservation is guaranteed thanks to Europe and UNESCO.
The floor is a huge polychrome mosaic from the fourth century, measuring 760 squared meters (seven times bigger than my apartment!) found in the 1900s when the covering tiles were taken off. 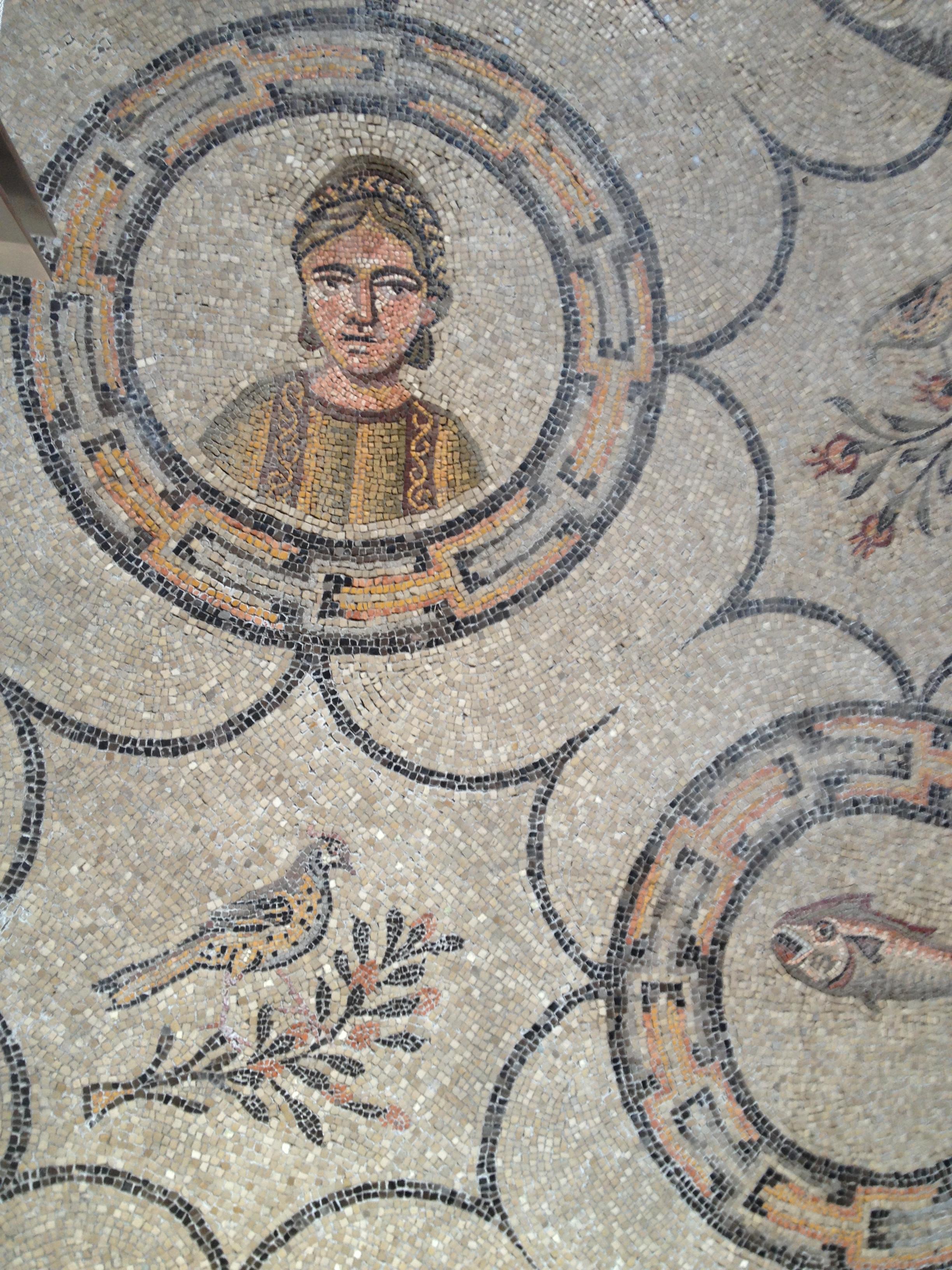 This is where the #makeheritagefun begins! The floor boosts with representations of all sort of animal and weird object and the visitor literally walks on top of them thanks to the glass platform. As you start visiting, you will walk by an unusual scene where a rooster fights a tortoise. The former is a symbol of the light of the new day, thus representing the good; the latter stands for the evil as its Greek name translates into “dweller of the darkness”.
I personally spent more than one hour searching for all those curious creatures: I saw a shepherd with his sheep, an octopus, a whole bunch of different fishes, some people’s portraits… and I found out all of them have deeper meanings. Did you know that when you see pictures of animals inside a church, it means that we are all part of God’s flock because we are men of good will, no matter what race or size we are?
Another great part of the floor mosaic is the big fishing scene. The boats represent the saving Church, while the Jonah stories in the Old Testament refer that three days after being swallowed by the whale, Jonah was spit out and survived.

On the far end of the Basilica, on that curved wall that makes the apse, I just stopped and stare: a magnificent fresco representing Mary and the Aquileian martyrs rises on the wall in such bright and delicate shades that it seems painted in watercolors. 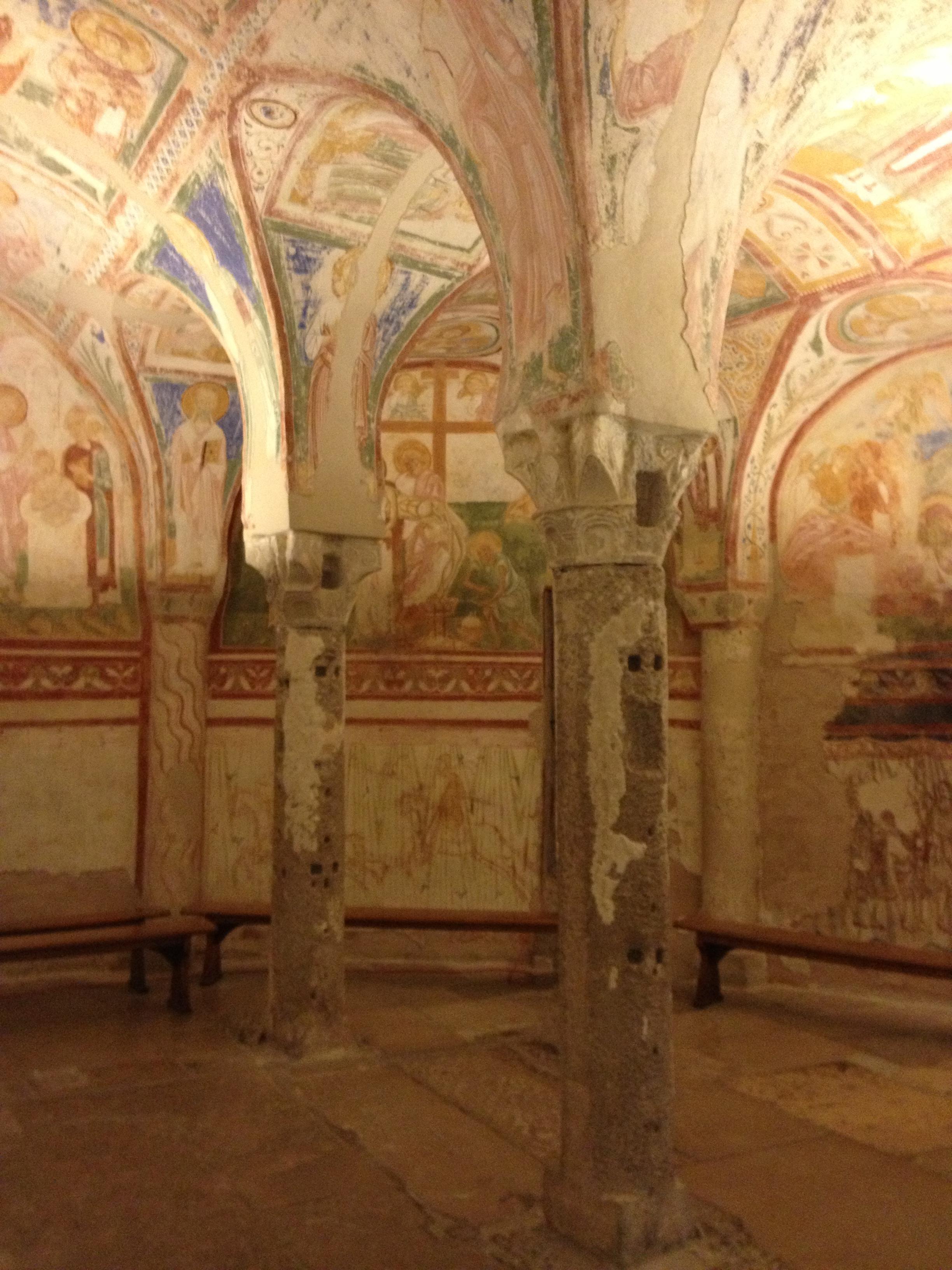 At this point of the visit, my advice is to pull out your coins for a ticket to the two crypts.
One of them hides more watercolors-like frescoes, portraying the origins of Christianity in Aquileia, the Passion of Christ and the Death of Mary.
The second crypt treasures more mosaics from different eras from the first to the fourth century, including those of a nearby Domus, an ancient family house.
The mosaics in the crypt are even freakier then the upper one. There are birds, an hippogryph (half eagle, half horse), a lobster on a tree –yes, seriously!-, and those that art history books define as “very particular objects”. 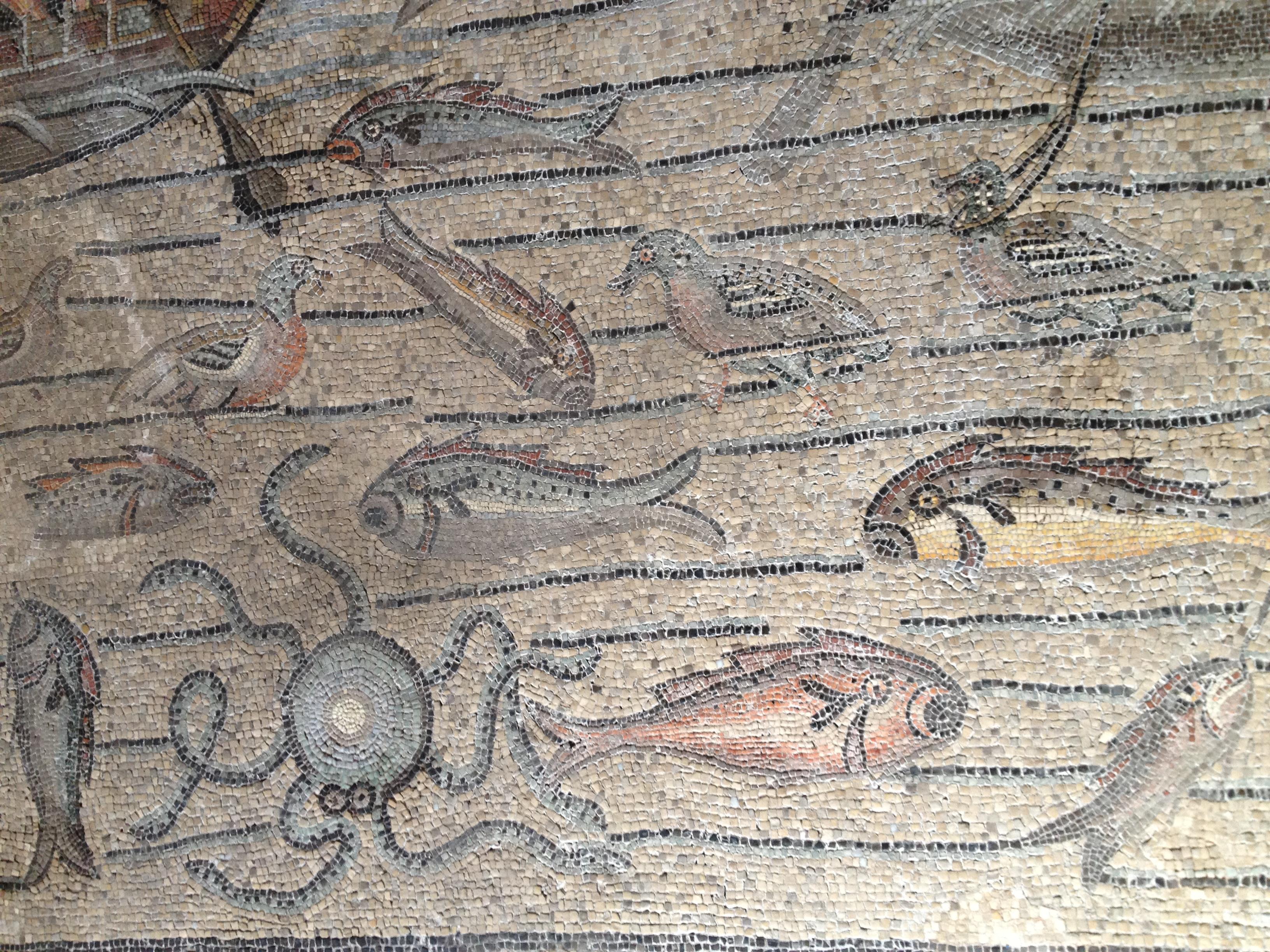 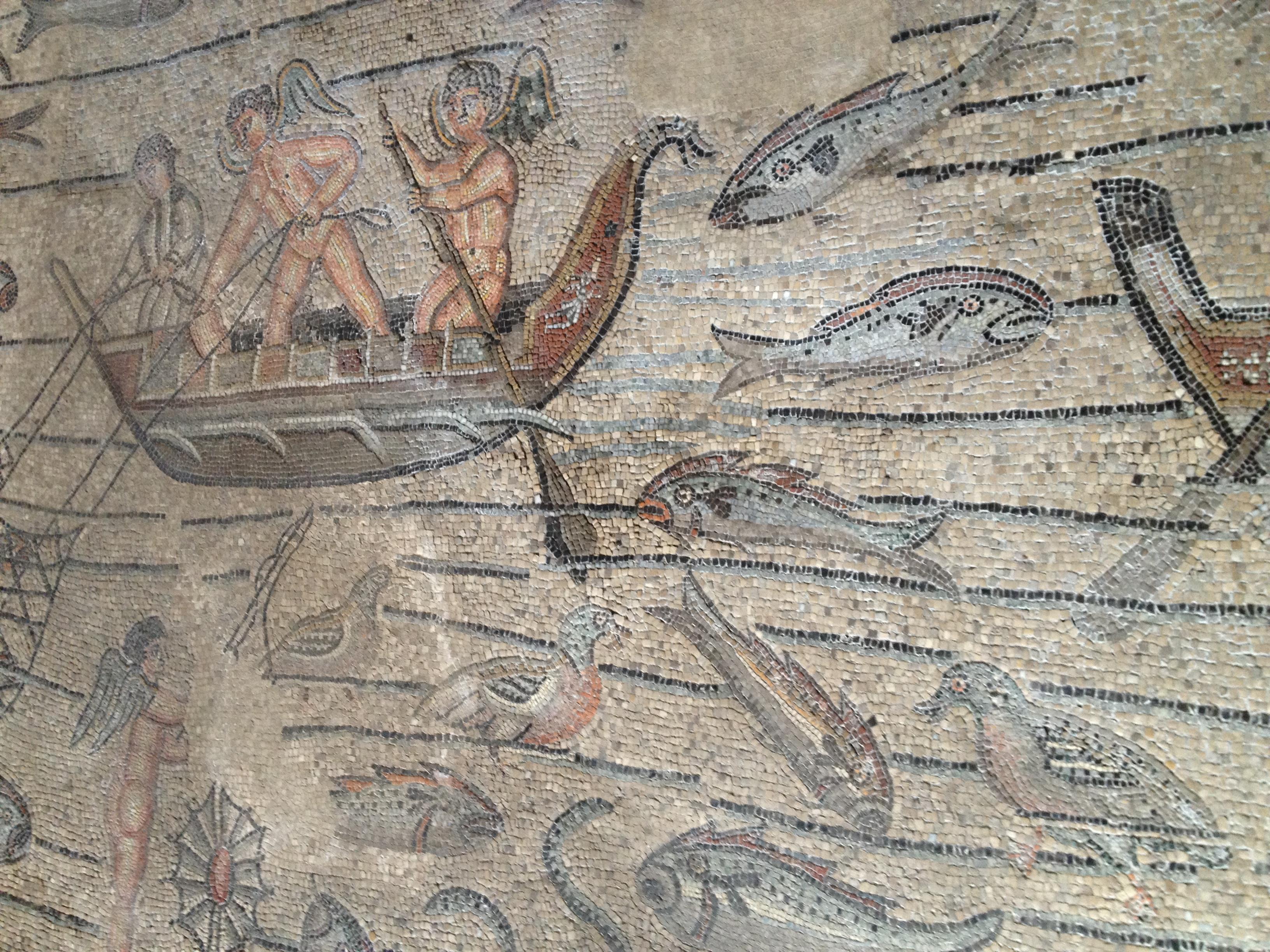 The worst part of the visit was the small number of visitors. This is why it is necessary to have people like me and the GoUNESCO team who are trying to take culture inside everyone’s life. Every person in the world lives by a great piece of heritage maybe without even knowing, and all we do is open your eyes to what is in front of you. 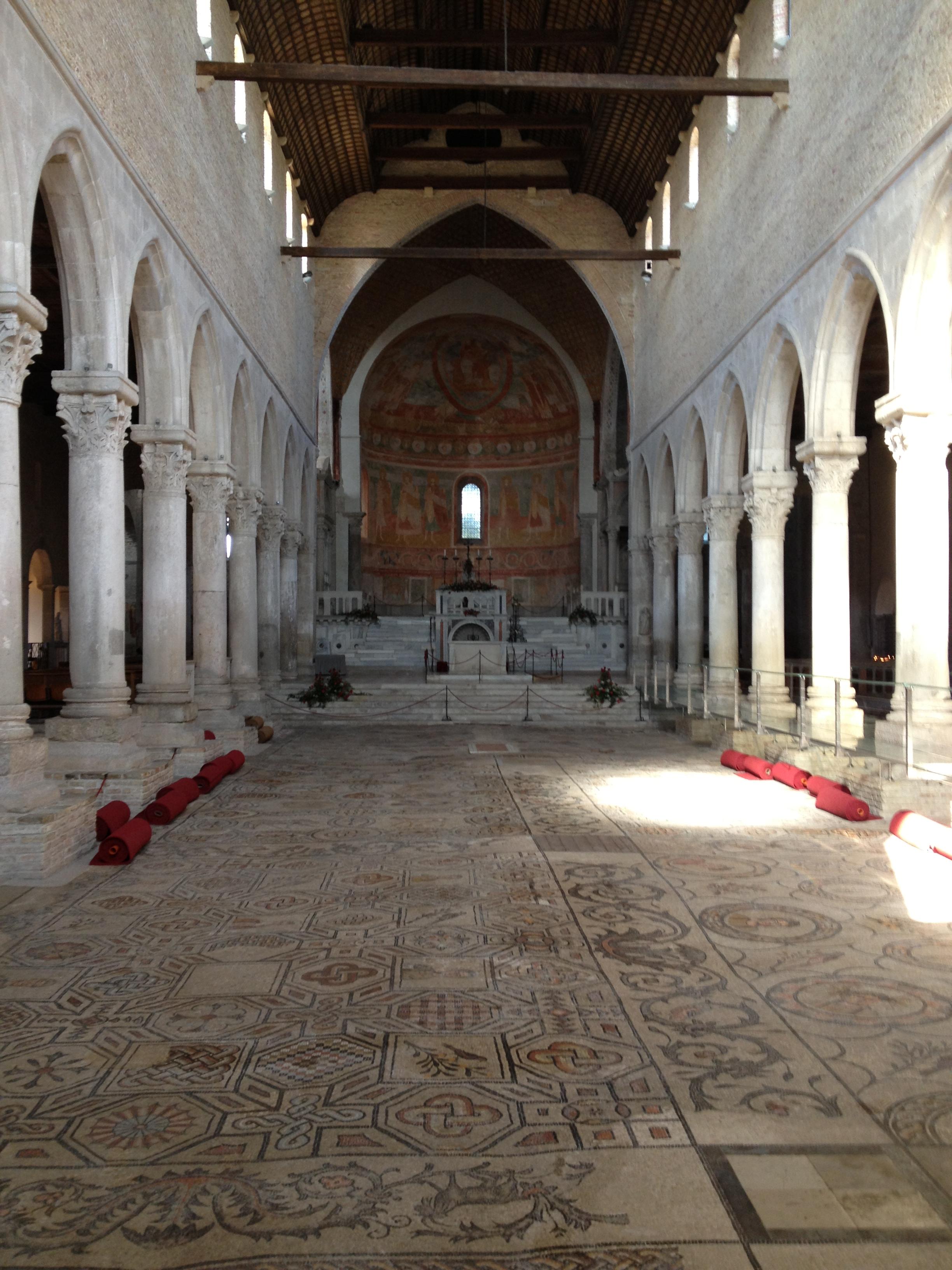 Take this text as an example: what I did was writing this article and if you are reading it, I am pretty sure you got interested and maybe did some research on the Basilica di Aquileia. What you can do now is telling your friends what you just read about, showing them pictures, maybe visit the place someday.
Networking is the best part of #makeheritagefun and it is the key to spreading knowledge, and knowledge is the key to peace and comprehension. So, are you going to be part of my network? 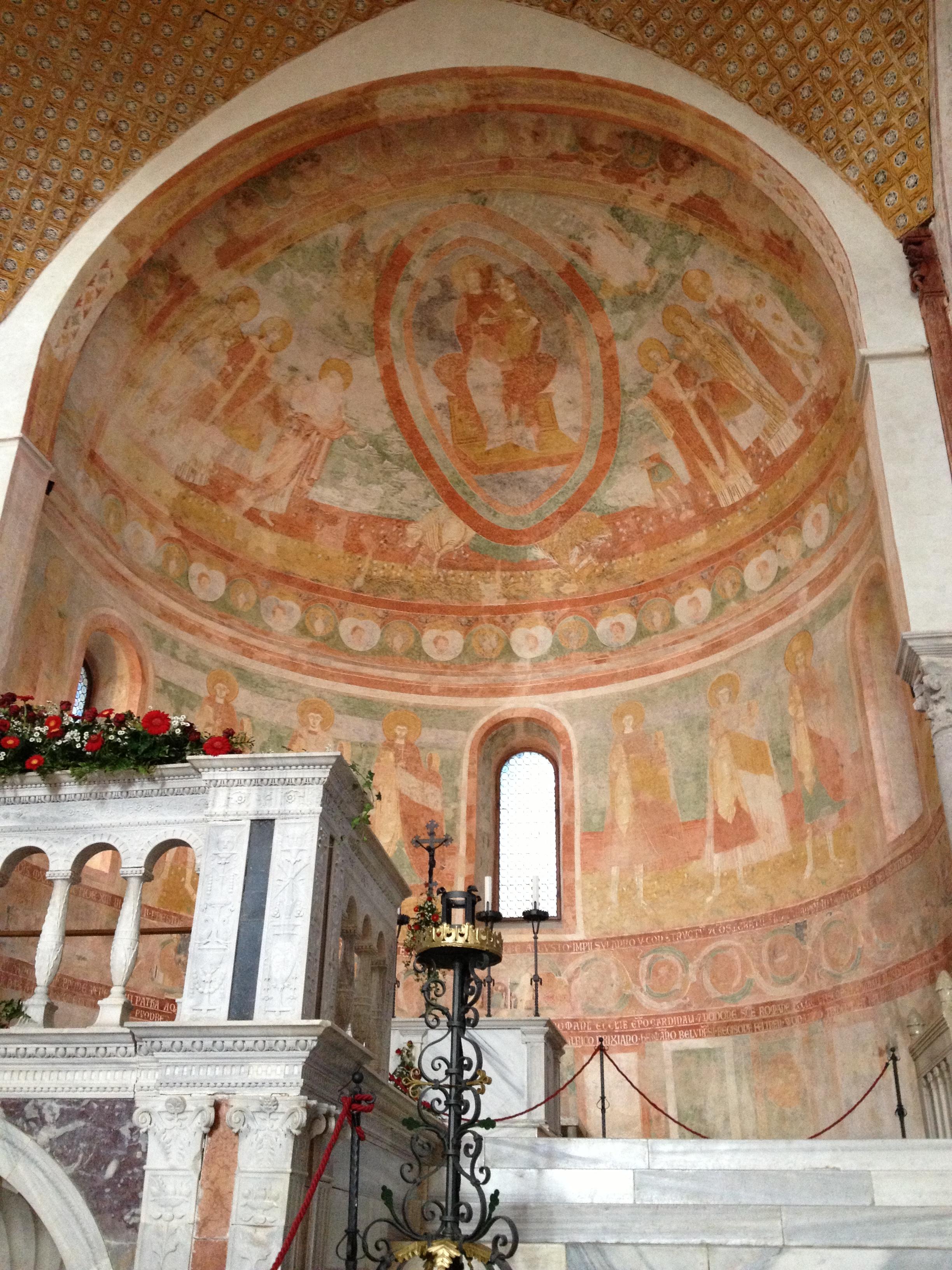 Archaeological Area and the Patriarchal Basilica of Aquileia – Italy

https://www.gounesco.com/heritage/proof/picture-hunting-aquileia/https://s3-ap-southeast-1.amazonaws.com/gounesco.com/wp-content/uploads/2014/05/31180120/crypt-768x1024.jpghttps://s3-ap-southeast-1.amazonaws.com/gounesco.com/wp-content/uploads/2014/05/31180120/crypt-150x150.jpg2015-12-22T21:10:54+05:30tatapiqueaquileia italy basilica mosaic fresco makeheritagefun,Archaeological Area and the Patriarchal Basilica of Aquileia,heritage,heritage site,italy,tatapique,travel,World Heritage Site,world heritage travel
When in Italy there is no such thing as boredom. This is why the #makeheritagefun events are so important for the Country. Italy has about 60 million inhabitants but only few of them are aware of the immeasurable treasure they are surrounded by. When you, as a foreigner, walk around any...
ariannadv@yahoo.comGcaGoUNESCO | Go UNESCO
Tags: aquileia italy basilica mosaic fresco makeheritagefun, Archaeological Area and the Patriarchal Basilica of Aquileia, heritage, heritage site, italy, tatapique, travel, World Heritage Site, and world heritage travel.
« Valparaíso, The Jewel of the Pacific
Fortifications of Constantinople »